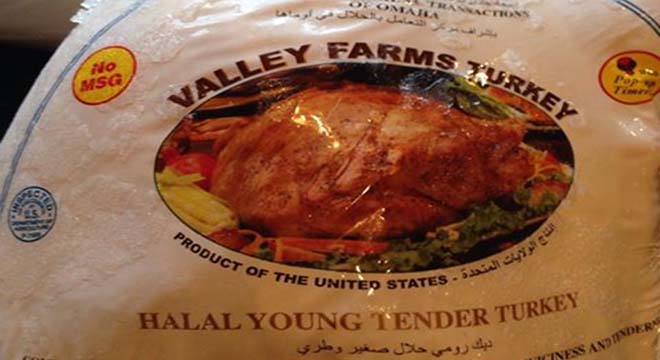 Thanksgiving is the singularly American tradition of family, friends, and food – and the mighty turkey reigns supreme. In fact, founding father Benjamin Franklin thought the turkey was a better candidate for our nation’s National Bird than the bald eagle:

“For my own part I wish the Bald Eagle had not been chosen the Representative of our Country. He is a Bird of bad moral Character. He does not get his Living honestly. … For the Truth the Turkey is in Comparison a much more respectable Bird, and withal a true original Native of America… He is besides, though a little vain & silly, a Bird of Courage, and would not hesitate to attack a Grenadier of the British Guards who should presume to invade his Farm Yard with a red Coat on.”

We Muslim Americans, being experts in food and family ourselves, have embraced Thanksgiving as emblematic of the values that drew us as immigrants to this nation. Of course, we do it our way – with halal turkeys.

Halal in this context means that the turkey must be hand-slaughtered according to zabihah rules, which are quite simple and not incompatible with how farm-raised turkeys are slaughtered anyway. As a result, halal-certified turkeys are much easier to find nowadays than in years past.

If you can’t find a halal turkey at your local muslim grocer (see zabihah.com for finding groceries near you), you can also order turkeys online: Midamar Halal and Taaza2u.com. There are a number of farms nationwide that sell their own brand, halal-certified turkeys to grocers, including Turkey Valley Farms, Mary’s Turkeys, Stony Brook Valley Farms, JD Farms (Canada), and Fulton Valley Farms. Visit their websites and call their contact number to see if they sell their halal turkeys in your market. Please share other sources of halal turkeys in comments!

Amusingly, Butterball turkeys used to be halal, resulting in outcry from hysterical Islamophobes like Pamela Geller about “creeping Shari’a” and having “halal turkey forced upon [non-Muslims] without their knowledge or consent.” Butterball did the safe corporate thing and stopped certifying their turkeys as halal; so it is possible that now Butterball turkeys are truly “stealth halal“, which would be hilariously fitting.

Since zabiha halal is actually a more humane method of slaughter than most industry practices, it is not surprising that halal turkey is increasingly available. At some point I expect that halal certification will be just as widespread as organic and kosher – in fact there is no reason that a single turkey can’t have all three certifications and be eligible for a wider market.

The good news for Muslim families celebrating thanksgiving is that we don’t need to compromise on our American tradition or our religious values.