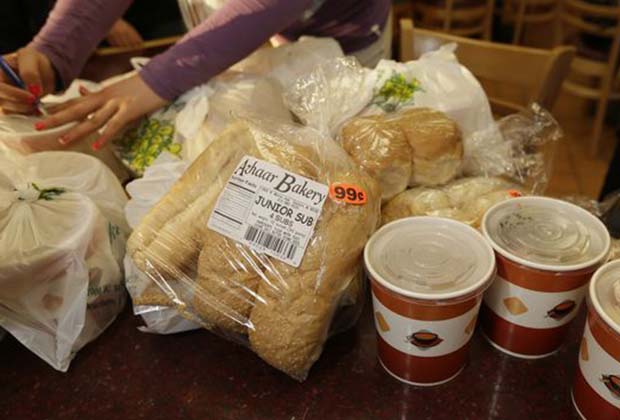 A Volunteer labels food provided by the Yasmeen Bakery in Dearborn, Mich., Friday, April 25, 2014. The reach of one of the nationâ€™s few charitable organizations exclusively providing halal food to the poor could be greatly expanded under the new federal provision. Zaman International Inc. is based in Dearborn, which has a large Muslim population has provided about 250 tons of hot and dry food since 2010 and serves about 150 families with a monthly food box and vouchers. (AP Photo/Carlos Osorio)

DETROIT – For the first time, the federal government is required to purchase and provide food banks emergency supplies of kosher or halal products.

The void was first revealed in the wake of Superstorm Sandy, which wreaked havoc on the East Coast in 2012 and led to food shortages for those most in need. A Jewish philanthropic organization in New York alerted lawmakers, and the measure was tucked into the sweeping federal farm bill signed into law in February.

Federal agriculture officials now must implement the law, which requires them to buy food prepared in accordance with Jewish and Muslim dietary rules. It can’t be more expensive than regularly produced food.

Agencies that operate food banks welcome the provision but say there are challenges in getting some products for the same price.

A Jewish philanthropic organization in New York alerted lawmakers to the rising numbers of people coming to its food banks and often finding shelves devoid of kosher offerings. That led to legislation aimed at boosting emergency supplies for food prepared in accordance with Jewish and Muslim dietary rules, and, after some unsuccessful attempts at passage, the measure was tucked into the sweeping federal farm bill signed into law in February.

“This amendment is going to go a long way toward ensuring that folks who are struggling to get by … don’t have to choose between religious beliefs and putting food on the table,” said U.S. Rep. Joe Crowley, a New York Democrat who worked on the measure. “No one should have to make those kinds of decisions.”

Federal agriculture officials now must implement the novel law, which requires them to buy food prepared in accordance with the faiths’ dietary rules but isn’t more expensive than regularly produced food. Then, it must be tracked through the distribution chain and properly labeled to ensure it gets to food bank operators and meets the needs of their clients.

The U.S. Agriculture Department’s challenges include gauging the demand and finding vendors that can supply the appropriate amount of food to keep it cost-neutral.

“These are the factors that affect the feasibility of being able to get foods in the program,” USDA spokeswoman Brooke Hardison said. “This is a process that’s going to take some time.”

Both kosher and halal refer to centuries-old dietary codes of each religion. Kosher describes foods that meet laws based in the Old Testament on what is fit for people to eat. The dietary laws predominantly deal with three issues: Some animals like cattle and finned fish are allowed, while others like pork and shellfish aren’t. Blood must be drawn out of meat before it’s eaten. Meat and milk can’t be mixed.

The general understanding for halal is that products shouldn’t be contaminated with pork or alcohol and that livestock is slaughtered in accordance with Islamic law. Similar to kosher practices, Islam requires the animal is killed with a single slash to the throat while alive. It’s intended as a way for animals to die swiftly and minimize pain.

Demand for kosher food is high in the New York metropolitan area, and both the New York and Detroit areas are major centers of halal consumption.

The USDA currently buys some kosher and halal foods but not in an organized, regulated fashion. It’s hard to know how soon the full effort can launch or how successful it will be, but a test run that predates the Farm Bill’s passage is underway.

The Jewish philanthropic organization, which worked with lawmakers on the farm bill provision, praised the government’s efforts but acknowledged it won’t meet every need. Chief executive David Frankel believes some items, such as canned vegetables and tuna, will be available but he doesn’t expect chicken to meet the price requirement because it’s more labor intensive.

“We recognize it would be hard to ask the government to go out and buy more expensive food,” said Frankel, who oversees a pantry that provides food packages to 15,000 households each month.

The reach of one of the nation’s few charitable organizations exclusively providing halal food to the poor could be greatly expanded under the new federal provision.

Zaman International Inc. is based in the Detroit suburb of Dearborn, which has a large Muslim population. Its regular food delivery and pantry services, which have provided about 250 tons of hot and dry food since 2010 and serves about 150 families with a monthly food box and vouchers, currently receives no federal support, but executive director Najah Bazzy said she will apply.

“It would be huge — a lot of our budget goes to halal meat and chicken,” Bazzy said. She noted high-protein meats, poultry and grains “aren’t the highest priority” for those served by the 10-year-old organization.

“For me, having the halal meat — if it could be given to us through the right vendors — really opens the opportunity for … giving people access to the total food pyramid,” she said.

Solomon Braude, 65, of Brooklyn has been a recipient at a Metropolitan Council food pantry since 2000, when he suffered two heart attacks. The Ukrainian immigrant said he’s grateful for the pantry and doesn’t focus on what might be in short supply.

US: New Law aims to boost halal, kosher food for poor
DETROIT - For the first time, the federal government is required to purchase and&hellip;

Previous: Swiss to vote on banning food speculation
Next: Kuwait to host Gulf Conference on Halal industry next month