The first ever to be held in the UK and coined as the world’s largest so far, the Halal Food Festival, London is a three day consumer food show dedicated to foodies who eat halal.

Aiming to celebrate the range and diversity of halal foods from around the world, the ticketed event is being held at London Excel from Friday 27 to Sunday 29 September 2013 and will offer visitors a first time glimpse into the very best that halal has to offer.

Halal is an Arabic word meaning lawful or permissible. It not only covers food and drink but also all matters of daily life. Followers of Islam (Muslims) must follow a dietary requirement that does not permit pork or pork products, alcohol and only allows meat slaughtered in accordance to strict guidelines in the Qur’an. Halal food is not a cuisine or a style of cooking in its own right. Therefore any cuisine or style can become halal provided it is cooked using halal ingredients and prepared in a halal manner.

Halal has grown from a buzz word to be a well known term, and this has given rise to more and more house hold brands offering more and more halal products. As the awareness rises among Muslims and non-Muslims alike, entrepreneurs have seen great potential in this market and as we have seen a number of exhibitions by manufacturers and producers for trade, for the first time this year we have seen halal food festivals being organised. 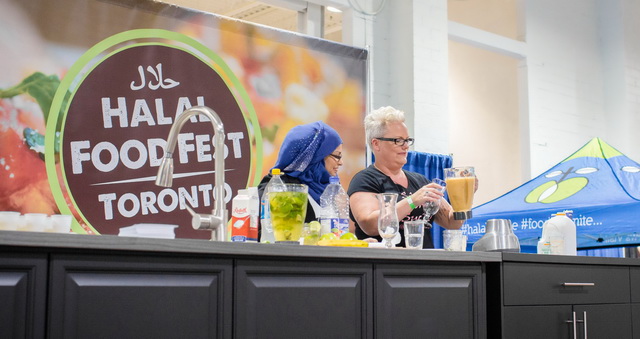 The first of its kind, The Halal Food Festival was held in Toronto, Canada on the 1st and 2nd June 2013 which drew in around 10,000 visitors. Here are some highlights from this event.

Another similar event took place across the border in United States on September 14, 2013 from 11 a.m. to 5 p.m. at UIC Forum, Chicago, however on a much smaller scale as the event was held indoors.

Visitors can look forward to over 100 exhibitors from across the globe showcasing the most innovative and delicious halal food and drink products, restaurants and street-food stalls.

In addition, there is a cooking school and live demonstration kitchen featuring top chefs such as Shelina Permalloo (winner of Masterchef UK 2012), Cyrus Todiwala OBE (Patron Chef of Cafe Spice Namaste) and Jean Christophe Novelli (5 out of 5 AA Rosette and Michelin award winning chef) to name a few.

Guests can tuck in to daring and invovative dishes such as green spiced chicken fenugreek or Bengali mutton by Joho Soho. Meaning ‘whatever happens’, the new Indian street food stall is being launched at the Halal Food Festival by acclaimed  chef Vivek Singh (Executive Chef at Cinnamon Kitchen, Cinnamon Soho and Cinnamon Club) and Abdul Yaseen (Head Chef  at Cinnamon Kitchen).

Alternatively, they can try their taste buds on sweeter options such as fine Palestinian medjool dates, stuffed with organic fairtrade nuts and topped with rosebuds by The Datelatiers. The thirsty will find a range of halal drinks on offer including an area dedicated to the making of mocktails in which guests can throw together exotic ingredients, fruit juices and flavours to create their own expertly made drink under the guidance of a professional mixologist and a range of stands for little haloodies to enjoy too.

Accompanying these gustatory pleasures will be live music on the Human Appeal stage with performances including that of one of the biggest stars of nasheed and Islamic music, Mesut Kurtis. His latest album ‘Beloved’ has been a ground-­‐breaking phenomenon in this genre of music across the Muslim world.

“The Halal Food Festival will bring together consumers and businesses in a festival format that can be used to showcase new brands and to raise the range and quality of halal offerings to the consumer.”