Home » Miscellaneous » UK: Will people pay more to ensure their meat is not Halal?

A survey of 1,977 UK consumers, conducted for The Grocer by YouGov, suggests few shoppers would be prepared to pay extra: 68% of meat eaters said they would not pay more to guarantee meat had not been religiously slaughtered, with just 17% willing to pay extra; 15% said ‘don’t know’. 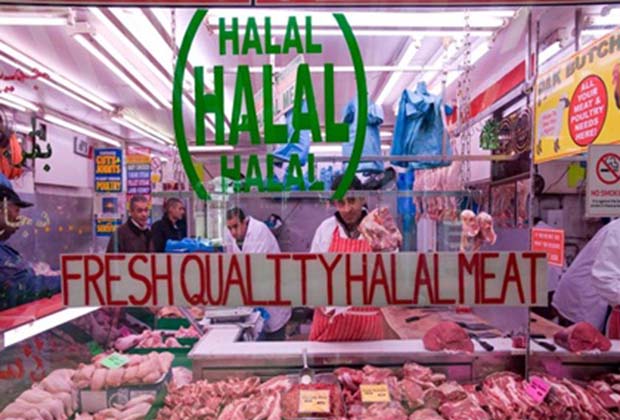 Only 17% of consumers would pay more to avoid halal

Despite the current furore over halal, the vast majority of UK shoppers are not prepared to pay more to ensure they do not eat religiously slaughtered meat, exclusive research for The Grocer has shown.

Recent media reports about supermarkets and foodservice chains ‘secretly’ selling halal meat – including lamb from New Zealand – have prompted calls for better labelling, but industry experts have warned this could add significant costs to the supply chain and drive up prices.

Overall, the survey found just over 50% of consumers were prepared to buy religiously slaughtered meat in some form – 21% said they would buy it provided the animal was stunned before being killed, and 32% said they did not care about slaughter methods at all, citing price or the quality of the meat as more important.

A quarter of British consumers said they would not buy or eat any type of religiously slaughtered meat, regardless of whether the animal was stunned or not.

Yet again halal meat is in the headlines. Although the “revelations” exposed in the national press last week were far from new, the hysteria they generated highlights how religious slaughter has become one of Britain’s hottest political potatoes.

And there is one clear message: post-Horsegate, consumers want better information about meat, so retailers, suppliers and regulators need to take a serious look at how they can improve labelling.

“I think a lot of businesses and restaurants will probably change their practices and change their labelling,” Prime Minister David Cameron said at the height of the furore.

But what does ‘better labelling’ actually mean, and is industry or government best placed to deliver it?

At present, how halal meat is produced and labelled in the UK is governed by self-regulation. There are no UK or EU laws specific to the halal sector – suppliers and retailers wishing to sell products as ‘halal’ can do so on trust alone, although most choose to be certified independently through either of the UK’s two main halal certification bodies – the Halal Food Authority (HFA) and the Halal Monitoring Council (HMC).

This means there is little legal recourse when products turn out to have been mislabelled. Defra says if meat “claims to be halal, it has to be halal” and the FSA has the power to take action as part of its general remit on preventing food mislabelling, but it typically falls to the halal certification bodies to act against any breaches.

As for meat slaughtered in accordance with halal rules but then sold without being labelled explicitly as ‘halal’ – as highlighted by the media over the past two weeks – there are no laws at the moment to prevent this from happening.

The lack of a legal framework has created a vacuum that makes consumers on all sides – Muslim and non-Muslim – vulnerable to being misled about the meat they buy, claim the HFA and HMC. Both are urging the UK government to put in place regulation.

“Self-regulation on this matter is too easy to bypass,” says Nadeem Adam, head of operations at the HMC. “The industry has to be more regulated, and food producers have to be more responsible.”

Calls for better meat labelling are of little consequence if not backed by law, agrees HFA chief executive Saqib Mohammed. “Halal must be defined and protected by legislation to be regulated appropriately to protect consumers from potential mislabelling or misrepresentation.”

Legally defining halal would be no easy task, however – especially where the controversial subject of stunning is concerned. HMC and HFA themselves don’t see eye to eye on the matter, with HFA allowing pre-stunning of animals, whereas HMC doesn’t (see box).

Although there are some consumers who don’t want to eat any religiously slaughtered meat – pre-stunned or not – research suggests failure to stun is the biggest concern for most. Animal welfare campaigners have also stressed they don’t take issue with religious slaughter per se, but want to ban – or at the very least clearly label – any meat from animals that weren’t stunned.

The option favoured by the BRC is to label only non-stunned meat. “The focus should be on animal welfare, explicitly if the animal has been stunned or not,” says director of food and sustainability Andrew Opie.

But HMC insists this would amount to discrimination. “Any scheme should encompass the whole range of halal products, rather than focusing on non-stunned animals, as that would unduly demonise one part of the community,” says Adam.

Given such sensitivities, it is perhaps no surprise that UK regulators and politicians haven’t rushed to get stuck in on this issue. Although Number 10 was last week reported to have vowed to “review the situation in a few months’ time,” Defra says the ball is in the industry’s court. “We want people to have the information they need to make informed choices about the food they buy. In the first instance that is for the retailer or the food outlet to provide,” says a spokeswoman.

A breakthrough on the matter could come from the European Commission, which is currently looking at whether to introduce new EU-wide labelling rules on religious slaughter.

“We have contributed to the EU on its study into compulsory labelling of meat and will review options for the UK once it is finalised,” says the Defra spokeswoman. The BRC is also awaiting the EC’s findings.

Eblex – which ran a consultation on launching a new industry-wide halal labelling scheme last year – has also decided to take its cues from Brussels for the time being. Its consultation received 62 responses but raised “a number of additional questions and challenges” that need to be investigated further, says Phil Hadley, Eblex’s southern senior retail manager. As Eblex does not want its scheme to be superseded by new EU rules, the project is on ice for now.

“The regulators can only do what current legislation allows, so there is little point trying to enforce labelling until the EC consultation is over,” says Gillian Harkess, an associate at law firm Eversheds. “I suspect the recent press coverage could hasten the EC’s decision, but any additional labelling regime will have to consider how much information is too much, and the costs could be huge.”

The EC’s findings are due to be published in the autumn. Spokesman Frederic Vincent adds that “a proper balance will have to be found between information to the consumer and respecting freedom of religion.” Few would disagree with this sentiment, but how to translate it into a fair, transparent and affordable labelling policy is likely to remain a challenge. And until the EC report, it’s only a matter of time before further headlines about halal emerge.

Does not permit pre-slaughter stunning

Mandatory recitation of Tasmiyah on each animal

Stunning permitted as long as it does not kill

Licensed slaughterman required to recite Shahada prior to slaughter

UK: Will people pay more to ensure their meat is not Halal?
A survey of 1,977 UK consumers, conducted for The Grocer by YouGov, suggests few shoppers would be prepared to pay extra: 68% of meat eaters said they would not pay more to guarantee meat had not been religiously slaughtered, with just 17% willing to pay extra; 15% said ‘don’t know’. Despite the current furore over halal, the vast majority of UK shoppers are not prepared to pay more to ensure they do not eat religiously slaughtered meat, exclusive research for The Grocer has shown. Recent media&hellip;