Subway refutes claims that it had ‘switched’ to halal meat alternatives in a number of its stores, claiming these outlets were specifically opened as halal stores, after news headlines such as this one floated in the news “Subway removes ham and bacon from nearly 200 stores and offers halal meat only after ‘strong demand’ from Muslims” 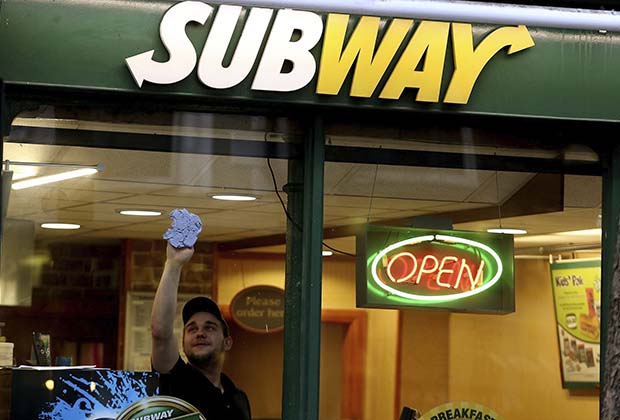 Sandwich chain Subway has defended changing the contents of some products in line with demands by Muslims for meat to comply with sharia law. Responding to various reports in the national media that the sandwich chain had removed ham and bacon from it’s menu in almost 200 outlets, a spokesperson for Subway said that, since 2007, franchisees opening new stores have had the option to open a halal store, dependent on consumer demand and the demographic of the local area, and that the use of Halal meats was not new.

The company had to respond after an article in daily mail suggested that pork had been removed from the fast food chain’s menu altogether, then there were further articles in the media titled:

Sandwiches at 185 Subway outlets in Britain and Ireland no longer come with ham or bacon as the pig is regarded as unclean in Islam. The pork has been replaced by turkey in a move the company hopes will avoid offending Muslim customers. Turkey is halal, or clean, to Muslims. Subway outlets adopting the new policy will display a window sticker reading: “All meats are halal.”

Details of its Halal stores can be found on Subways website, and there are “numerous signs” stating that Halal food is served within the stores themselves, according to the official statement from the firm: “All halal Subway stores have numerous signs stating that they serve halal food. These are situated on the menu panels, nutritional information and in the front window of the store.”

The spokeswoman declined to address whether certain stores display “all meats are halal” signs, saying only that there are signs at select locations letting customers know that meats sold within comply with Islamic standards.

Pressed further about reports that ham and bacon have been removed completely from menus at 185 locations, the spokeswoman did not answer directly.

“It is factually correct to say that the Subway brand have approximately 185 stores that serve halal food in the UK and Ireland,” she said.

But the practice of halal slaughter, which can only be performed by a Muslim who recites “Bismillah Allahu-Akbar” (in praise of Allah) before the slaughter, has gathered opponents and it’s critics say it is inhumane because sharia law demands the animal is conscious at the moment of slaughter.

Subway insisted that the animals that provided its meat were stunned before slaughter, as required by the EU. Some Muslim leaders feel that stunning an animal before it is slaughtered does not transgress the tenets of the Koran, the RSPCA said.

Speaking about the general issue of halal slaughter, an RSPCA spokeswoman added: ‘Scientific research has clearly shown that slaughter of an animal without stunning can cause unnecessary suffering, and the RSPCA is opposed to the slaughter of any animal without first making it insensible to pain and distress.

‘At present, the only legal exemptions to stunning during slaughter exist for kosher and halal methods of slaughter, however, it is important to differentiate between ‘religious’ and ‘non-stun’ slaughter as around 90 per cent of all halal in the UK receives a stun before slaughter.

‘Our concern has nothing to do with the expression of religious belief but with the practice of killing by throat cutting without pre-stunning.

‘We believe that meat produced from animals stunned or not stunned before slaughter should be clearly labelled to allow consumer choice, and continue to press for changes in the law that would improve the welfare of all farm animals at the time of slaughter.’

A Subway spokesman said:”All our suppliers comply with EU animal welfare legislation as a minimum and we require suppliers of Halal products to adopt the stunning of animals prior to their slaughter. All Halal meats are certified by the appropriate Halal authorities,” it added.

The US-based firm said it was responding to community requests. “The diverse multicultural population across the UK and Ireland means we have to balance the values of many religious communities with the overall aim of improving the health and welfare standards of animals,” said a spokesperson.

“Due to the growing popularity of the Subway chain, with the diverse multicultural population across the UK and Ireland, we put a programme in place in 2007 to ensure that the population demographic is taken into account when new store openings are considered in order that we meet consumer demand in each location,” said Subway.

It said the term used in a number of articles, that Subway had ‘switched’ to halal meat alternatives, such as turkey ham and turkey rashers, was misleading, as the stores that opened as halal stores have always sold these items instead of ham or bacon.

She added that the Daily Mail article infers that there has been a “sudden change” in policy over Subway’s handling of the issue, which the company says is “incorrect,” saying that the program has been in place since 2007.

The U.K. Bristol Post reported this week that two specific locations have indeed cut ham and bacon from their menus, serving only halal meats, which staff members at the two locations confirmed to TheBlaze.

The meat practices at the remaining 183 stores were not confirmed.

UK: Subway refutes ‘switch’ to halal meats as misleading
Subway refutes claims that it had 'switched' to halal meat alternatives in a number of its stores, claiming these outlets were specifically opened as halal stores, after news headlines such as this one floated in the news "Subway removes ham and bacon from nearly 200 stores and offers halal meat only after 'strong demand' from Muslims" Sandwich chain Subway has defended changing the contents of some products in line with demands by Muslims for meat to comply with sharia law. Responding to various reports in the national media that the sandwich chain had removed ham and bacon from it's menu&hellip;