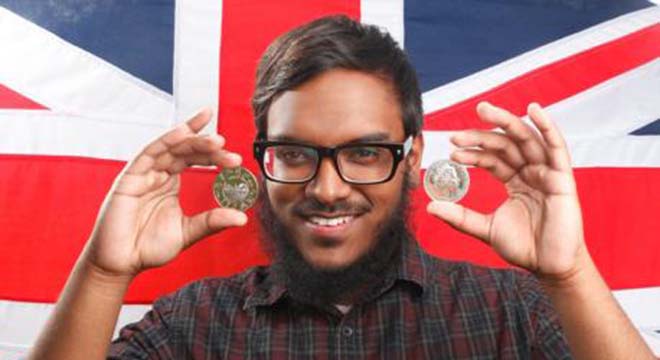 A young graphic designer, who designed a prize-winning coin to mark the London Olympics in a competition run by the Royal Mint, is helping a new British-based food company with branding.

Brunei Wafirah UK Ltd. has set up a pan-European headquarters in a warehousing facility at Saltley Business Park, Birmingham, from which to supply its Halal products to Britain’s 2.7 million Muslim residents as well as the other 41 million Muslims living throughout the EU.

He is also liaising with professional product designers as the company strives to reach its target of becoming a £200 million brand within the next three years.

Saiman, who holds a BA Hons and Masters from Birmingham City University, is bringing the same inspiration to promoting the bruneihalal image that enabled him to design one of the two official £5 coins released by the Royal Mint to mark the 2012 Olympics.

He won the £5,000 prize after entering the competition for art and design students attending higher education colleges and universities across the UK to come up with a commemorative design celebrating London’s role as the host Olympic city.

The company gives him time off to mentor students at a local Sixth Form College under the Mosaic programme set up by Prince Charles to help young people in deprived communities.

“We are delighted that we are able to make Saiman available to perform this valuable service which we regard as a vital part of our corporate social responsibility,” said Dr Mohammad Nazir OBE, the CEO of Brunei Wafirah UK Ltd.

“There could not be a better mentor for the students or a better ambassador for our company. His inspiration typifies the sort of enthusiasm we shall need in the years ahead.”