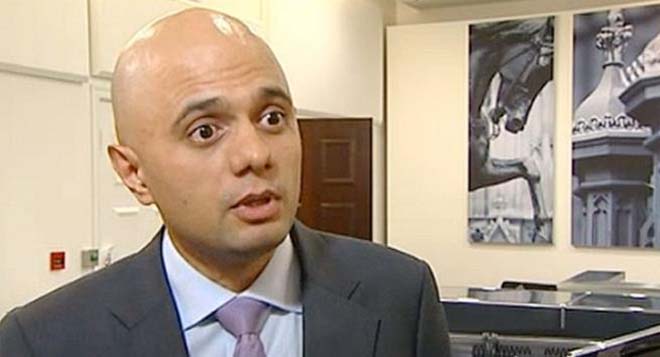 UK Financial Secretary to the Treasury Sajid Javid told reporters at the World Islamic Economic Forum that GIFIG will include members from key Islamic finance centers, such as the central bank governors from Kuwait, Bahrain, Qatar, UAE, the UK and Malaysia (Courtesy of the Telegraph)

London: Another sign that the British government has stepped up its Islamic finance proposition to a potentially important new level is the establishment by the UK government of the Global Islamic Finance and Investment Group (GIFIG), comprising financial regulators and chief executives from the OIC countries.

UK Financial Secretary to the Treasury Sajid Javid who was promoted to this new position in Prime Minister David Cameron’s mini cabinet reshuffle in October, said on the sidelines of the World Islamic Economic Forum that GIFIG will meet regularly to identify and address the critical factors that will drive the global Islamic finance market over the next five years.

The Group is chaired by UF Foreign and Commonwealth Office Minister, Baroness Saeeda Warsi, who is also the Co-Chair with Sajid Javid of the UK Government Islamic Finance Task Force launched in March earlier this year.

In some respects the UK leadership in setting up this Group could turn out to be more important than the issuance of a debut 200 million British pounds sovereign sukuk by the UK Treasury in the wholesale sterling market, as announced by Prime Minister David Cameron in his speech at the opening of the World Islamic Economic Forum 2013 in London last Tuesday.

“I am delighted that the government is establishing this Group. We are competing in a global race and it is crucial that we, as a country that is open for business, know what we need to do to take advantage of the Islamic finance opportunities that are out there.

“The Islamic Finance and Investment Group will be perfectly placed to pick up on developing trends and will have the expertise to help Islamic finance grow globally, as well as developing London as one of the world’s leading Islamic finance centers,” Sajid Javid said.

According to the UK Treasury, GIFIG will comprise members from key Islamic finance centers, including Central Bank Governors from Kuwait, Bahrain, Qatar, UAE, the UK and Malaysia; key industry chief executive officers; and senior experts and practitioners from the `Islamic finance industry.

GIFIG, according to a statement of HM Treasury, will hold its inaugural meeting in January 2014 under the auspices of the UK government “to consider the issues surrounding Islamic finance and how best to work together to promote its development. Drawing on London’s experience as a leading global financial center, the group will play an important role in helping to grow the Islamic finance market going forward.”

The UK Treasury will consult other important markets and players including Saudi Arabia, the single largest market for Islamic finance in terms of assets and liquidity, and Indonesia, the most populous Muslim country in the world. Financial Secretary Javid will confirm the final scope and membership at the Dubai Global Islamic Economy Summit later this month.

Javid, in a tweet, stressed that “our [the government’s] sovereign Islamic bond plan will help UK become a world leader in Islamic finance, boosting UK investment and jobs.”

Industry organizations such as TheCityUK, the influential body promoting London as the leading international financial center, including Islamic finance, are strongly supporting the Coalition Government’s new-found initiatives on Islamic finance.

Chris Cummings, CEO of TheCityUK, said in a statement that “the sum proposed for the sukuk, 200 million British pounds, is a good start to measure demand and once this is identified, larger issues can be contemplated. Apart from the message that the announcement sends to our international partners confirming London’s position as a global hub for Islamic Finance, the issuance of an Islamic bond in the UK will also address the liquidity requirements of Islamic banks currently based in the UK and those looking to establish operations here.”

Perhaps the biggest fillip from GIFIG could come in facilitating policy movement on Islamic finance in Organization of Islamic Conference (OIC) member countries, many of whom lack such policies or commitment.

With the UK Treasury, a member of the G7 (Group of Seven industrialized countries) leading this initiative, the chances of such policy traction must be increased.

Given the lifespan of GIFIG is 5 years, the Islamic finance industry can look forward with some optimism to perhaps positive changes in the attitude and policies of OIC member countries towards a $1.3 trillion and growing industry and global phenomenon.