A flu vaccination programme at schools in Keighley has attracted criticism after it was discovered the vaccine contains pork gelatine. This follows similar issues earlier in Leicestershire. 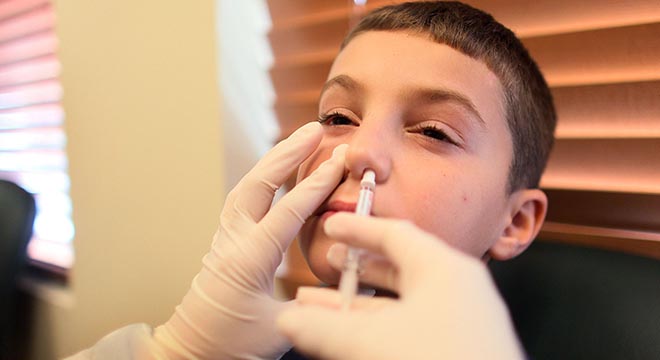 Leicestershire and Rutland is part of a pilot by NHS England to offer the nasal flu vaccine Fluenz to 70,000 pupils in the region, aged four to 10.

Many pupils cannot consume or use animal products for religious reasons, or because they are vegetarian.

Health officials have apologised for not informing parents at the outset. Leicestershire Partnership NHS Trust has decided to postpone the programme at a handful of schools due to receive it today and tomorrow after parents raised concerns about the vaccine, which comes in the form of a nasal spray.

Revised information is now being sent to all schools and head teachers are being asked to pass it on to parents.

Nigel Bruen, head teacher of Coleman Primary, in Spinney Hills, Leicester, where immunisation was due to start today, said after being contacted by parents he approached the health authority and discovered the vaccine contained pork gelatin.

He said: “I wrote to parents immediately to tell them and made it clear if they wished to withdraw their child, the decision was open to them.

“About 350 of our pupils had signed up for it and that has now dropped to fewer than 100.

“I don’t have a medical background and took it in good faith this would already have been taken into consideration, especially given the recent scare over pork in halal burgers.

“I’m grateful some parents were clearly on the ball and raised it with me.

“An immunisation programme such as this requires much more forethought.”

Spinney Hill Primary school was also due to start the vaccinations this week.

At another school attended by Muslim pupils, head teacher Chris Hassall said it showed a lack of “sensitivity”.

Mr Hassall, from Taylor Road School, Leicester, said: “Parents have a right to know what’s in it.

“Why can’t we be transparent and open so that parents can make an informed choice.”

His sentiment was echoed by Suleman Nagdi, of The Federation of Muslim Organisations in Leicester.

He said it was especially important for parents to have confidence in the system following the recent scare over pork in halal burgers at a Leicester school. 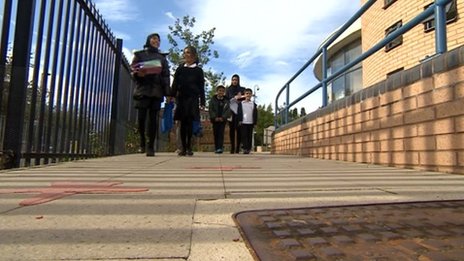 Health officials said the vaccine was more effective on children and was easy to administer. While some parents at the school said it was important to trust the health authority.

The region is part of a national pilot programme by NHS England to test the practicalities of giving the vaccine to a large number of children in a school setting.

Dr Tim Davies, NHS England’s consultant lead for immunisation in Leicestershire, said: “If we can learn to do things differently we will look at doing that.

“Any immunisation programme has to be acceptable to the population it’s being offered to.”

However, he added: “It depends on whose view you take as to whether [pork gelatine is] an acceptable or unacceptable ingredient of the vaccine.”

He said it was not practical for all ingredients to be listed.

“Vaccines have a lot of products in them, in very small quantities – but I think we wouldn’t normally expect to list those – otherwise it becomes a very long and complicated document,” he said.

A spokesperson for the Vegetarian Society said: “Some vegetarians will be shocked to learn about the use of animal ingredients in vaccinations.

“This is a complex area with no overnight solutions, but the Vegetarian Society believes that everyone has a right to know what they are consuming.”

Luman Ali, from the Federation of Muslim Organisations, said: “Pork is not allowed to be ingested at all – it’s something Muslims feel extremely uncomfortable about.”

Asked about why the vaccine contained pork gelatine, Mr Davies said: “Fluenz is a live flu vaccine – the viruses need to be bound to something in order to make the vaccine work – the best thing to bind them to is a protein and the best protein to use is one that has been derived from gelatine.

“At the moment Fluenz is the only vaccine available as a nasal spray – and the only live flu vaccine – it works better on children.”

Dr Mary Ramsay, Head of Immunisation at Public Health England said: “Public Health England has previously published advice on our website from representatives of the Jewish community in England and the global Muslim communities regarding porcine or other animal-derived ingredients in medicinal products such as vaccines.

“Porcine gelatine is permissible as a transformed product, and there is no objection to its use in medicines based on considered opinions of many Muslim clerics.”

Keighley Muslims have been advised a nasal spray flu vaccine for youngsters is compatible with Islam.

But local religious leaders have questioned this view.

Shirley Brierley, consultant in public health for Bradford Council, was responding to concerns this type of vaccine was derived from pork.

She said: “Flu isn’t just a cold – it’s a very contagious illness that can result in death – we’d encourage anyone eligible for a flu vaccination to have one.

“The injectable form of the flu vaccine is suitable for all eligible people 18 years and over, and also very young children under two years of age.

“All eligible children between two and 17 years will be offered Fluenz vaccine via a nasal spray, which is more effective for this age group.

“It contains porcine gelatine, but this is understood to be a transformed product and acceptable within Islamic and Jewish communities.

“In 2001, the World Health Organisation consulted more than 100 Muslim scholars and confirmed the gelatine is considered halal.”

However, Mohammed Saleem, Keighley Muslim Association spokesman, said he understood the nasal spray is not acceptable for Muslims when there is an injectable form of vaccine available.

“As the nasal spray contains a form of pork gelatine, it would not be permissible for Muslims to administer,” he said. “Therefore, Muslim children should be offered the injection as an alternative.”