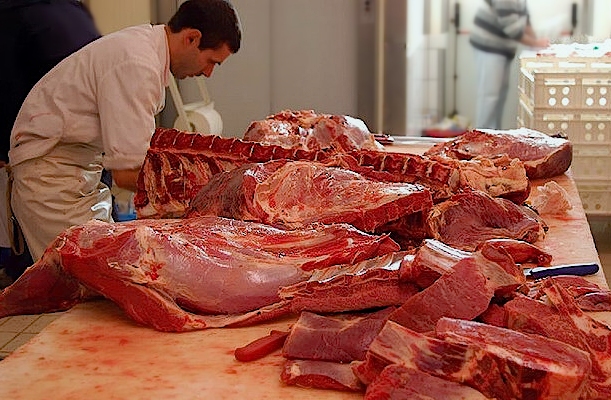 As the winter nights draw in my thoughts turn to my husband’s delicious homemade mutton curry.

And here in Birmingham the best place to buy mutton is one of our local Halal butchers in the Bullring Market. Since I’m not a Muslim for me it’s the meat that’s important so I want to be sure the animal was stunned before slaughter. Most Halal meat is stunned but not all and when out shopping it can be hard to tell which is which. Now there are moves to change that.

Sitting chatting with Dr Mohammad Naseem over tea in the Birmingham Central Mosque he explained to me that for him Halal meat should not be stunned before slaughter. It may be an uncomfortable idea for many but for him it’s non-negotiable.

Halal is hugely important to our Midlands sheep farmers as the Muslim population of the UK eat so much lamb and mutton. Just under 5% of the UK population is Muslim but they eat more than 20% of English lamb. It’s a big sector that helps support prices at a good level for farmers.

In a snapshot survey of abattoir activity from the Food Standards Agency, about half of all sheep passing through our abattoirs are stunned and then killed in the standard way ready for a typical Sunday roast. The other half will be slaughtered according to Halal rules and the majority will be stunned first. But around 10% of the entire total will be slaughtered without stunning.

For Dr Mohammad Naseem only that 10% is Halal. For me looking for mutton for curry it’s the meat I don’t want to buy. But neither of us can be sure what we are getting. Now Warwickshire-based Eblex, the industry body, is consulting on how to improve this state of affairs and for the first time that could involve labelling to make it clear if the animal has been stunned or not.

This is just a consultation at the moment and it would only be voluntary, but Eblex are hopeful it can be adopted by the industry as a whole. In particular for our medium sized abattoirs who may run both stunned and non-stunned Halal slaughtering and who would have to show much greater traceability and transparency about what happens to a particular batch of meat.

The bigger question of the cruelty and appropriateness of non-stunning slaughter be it for Halal or for Kosher food seems to have reached a political pause at the moment with the government declaring it would continue after a long consultation. Groups like the RSPCA are unhappy about this but accept more information for consumers would be an important step forward.

There’s clearly a demand for much clearer labelling from many consumers with all sorts of views on this controversial subject. That’s what Eblex want to try and provide and they will report back in the new year. So what do you think of the plans?

Previous: UAE: Demand on halal products to grow by 15%
Next: Opinion: So what is Islamic Marketing & what’s all the noise about?