The Halal Food Authority has decided to remove certification from stunned poultry if new EU regulations on stunning voltages are imposed. 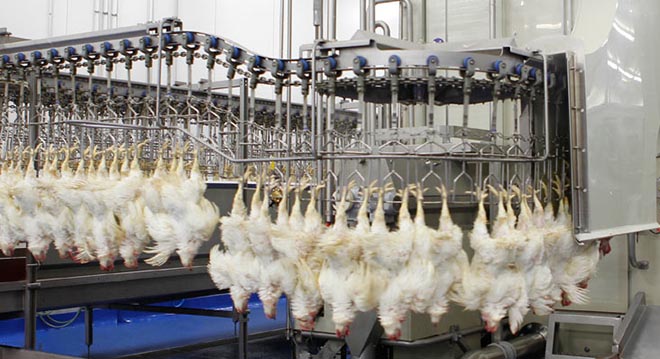 However, many say it is merely a gimmick by the HFA to salvage its bad reputation due the discovery of Pork in its halal certified pies.  An anonymous user commented:

“HFA is merely trying to save its image, as no one trusts its certification, the public perception about HFA is ZERO. They will never be able to regain public support and confidence. We are done with them. RIP HFA”

In a letter sent to poultry operators on poultry operators on 12 November 2013, and seen by Meatinfo.co.uk, the Halal Food Authority (HFA) claimed enforcement of EC 1099/2009 on 1 January 2014 – which includes requirements for higher stunning voltages – could result in the death of birds prior to slaughter, something that is not permissible under halal rules.

“Having considered the impact of [the] eventual enforcement of the EU Regulation ‘Welfare of Animals at the Time of Killing’ EC 1099/2009 on slaughtering of poultry for halal purposes, [the] HFA has now concluded stunning of poultry as incompatible with HFA halal standards and hereby abandon its permissibility for halal slaughtering in the EU,” stated the letter.

According to industry sources, stunning voltages will have to increase by 50% under the new EU Regulation and could result in the death of approximately 35% of birds.

“The parameters for water bath stunning that are detailed in Annex 1 of the Regulation do not seem to have yet proven the recoverability of birds after [the] stunning process,” the HFA letter added.

Caught in the middle

UK poultry processors certified by the HFA have claimed they are caught in the middle and set to lose a lot of money if the government enforces the EU Regulation.

Dennis Manley, commercial manager for Crown Chicken – which produces stunned halal poultry that is certified by the HFA – told Meatinfo.co.uk that he did not agree with non-stun operations on a welfare or commercial basis. He added the quality of the end-product would be reduced if the birds were not unconscious, as they would be moving.

However, he said he believed that stunning voltages for poultry should stay as they are. “It’s going to have a major effect on our business and all of the businesses that do halal poultry,” he said. “Ninety per cent of halal poultry in the UK is stunned, the new stunning regulations say we have to stun to kill and, to halal consumers, that is not acceptable.”

A spokesperson from 2 Sisters Food Group told MeatInfo.co.uk: “We note the HFA’s position in relation to the new EU stunning regulations. We will work with all relevant authorities to ensure we comply. At the moment we are realigning our operations to ensure we meet the requirements of all our customers.”

A Defra spokesperson confirmed the regulations would be imposed in January 2014, but would not comment on industry concerns over whether the voltage increases would cause more poultry deaths.

“We would prefer to see all animals stunned before slaughter, but respect the rights of the Jewish and Muslim communities to eat meat prepared in accordance with their religious beliefs.” said the spokesperson in a statement to Meatinfo.co.uk.

A halal meat operator, who didn’t want to be named, said Defra should carry out a study on the impact of the new voltages on poultry recovery.

He claimed only one trial had been carried out on the recommended current/frequency combinations, and that its findings were questionable because it was based on the premise that if a bird’s heart is still beating at slaughter, it is definitely halal. He claimed this was not necessarily true, pointing out the heart can beat for many minutes, even after traditional slaughter without stunning.

“The increase of 50% in pulsed unipolar square wave (DC) Treatment No 1, as demanded by the new EU Regulation 1099, will result in the death of approximately 35% of the birds in my view. Nevertheless even 1% death is not acceptable to the Muslim community,” he said.

“The only option the Muslim community has for halal poultry is to go non-stun as that guarantee the birds are alive at the point of slaughter, which is a strict dietary requirement based on the Quran.”

Previous: UAE: Dubai can take a big bite out of global halal industry
Next: UAE: Demand on halal products to grow by 15%