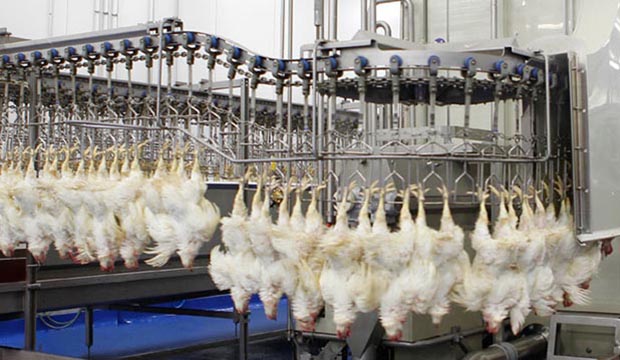 With issues on religious slaughter coming in the news once again with regard to some EU countries banning religious slaughter without stunning, the Halal Food Authority has issued the following statement on the conditions with which it will certify poultry that goes through electric bath stunning before slaughter:

HFA Having attended and witnessed the results of the recovery trials carried out in association with the University of Bristol at a poultry slaughterhouse in Spain on 8th January 2014, HFA permits water bath stunning parameters set out in the Annex I of the EU Regulation EC1099/2009 for halal purposes, provided that the following conditions are fully met:

HFA will now only be accepting and processing new accreditation requests from poultry slaughterhouse(s) that would fully comply with the above criteria. Furthermore, all poultry slaughterhouses that are currently approved by the HFA shall abide by the above rules from the date Food Standards Agency (FSA) shall implement and enforce the new EU Regulation EC1099/2009 in the UK.

Halal Food Authority (HFA) is an independent, voluntary, not-for-profit organisation operating as a commercial wing of a registered charity. The objective of HFA is to facilitate the Muslim Ummah to be partial to genuinely manufactured halal food in compliance with HFA Halal Standards, Islamic Jurisprudence and relevant EU regulations in vogue. Simultaneously, HFA creates awareness of halal principles and axioms for halal production within food industry, consumers and various national and international forums.

Eat-halal.com has no relation or bearing on the press release by HFA. Viewers are advised to check the status of relevant halal certification organisations before making an informed decision.