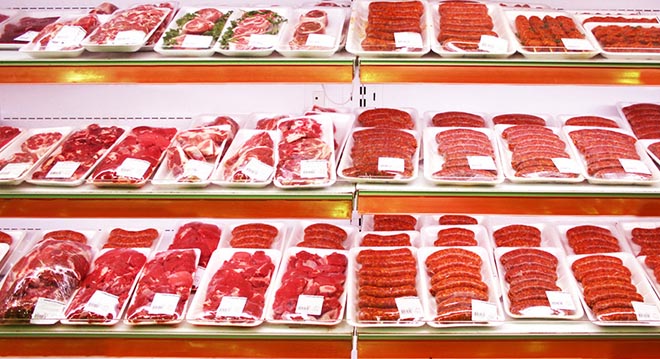 Non-stun label call cause for displeasure

Members of the halal industry have questioned the RSPCA’s support for compulsory labelling of non-pre-stunned halal products and have demanded to know why only religious slaughter should be labelled as such.

The RSPCA this week urged MEPs to sign a Written Declaration tabled in the European Parliament, which calls for compulsory method of slaughter labelling on non-stunned meat and poultry products.

Commenting on the EU proposals, head of the RSPCA’s farm animal science department Dr Julia Wrathall said: “We would rather see all animals pre-stunned before they are killed, however we believe labelling that clearly differentiates between animals that have been stunned or non-pre-stunned is still a step in the right direction.”

The RSPCA said it recognised religious beliefs and practices should be respected, but Wrathall added: “Consumers have the right to choose whether or not they wish to buy meat from animals slaughtered without pre-stunning.”

However, advisor to Yorkshire Asian Business Association (YABA), Naved Syed, said the RSPCA had “failed” to respect religious views and “singled out Muslim and Jewish communities as easy targets”.

He added that it seemed “incongruous” to presume consumers had the right to know slaughter by religious methods, but had “no right to know if their meat was slaughtered by mechanical methods or mechanically stunned prior to slaughter by one of the legal methods of mechanical stunning, which include captive bolt shooting, gassing, electrocution, drowning, trapping, clubbing or any of the other approved methods”.

Mohammad Amir, CEO of Assure IP and a Muslim certifier, with a Masters in both Meat Science and Food Technology, said he supported the RSPCA’s initiative for better labelling, but raised questions over why labelling should apply to slaughter only.

“Food labels should be meaningful and balanced and, if a welfare label is desired, then it should incorporate welfare concerns throughout the whole of the animal’s life and not just a specific slaughter methods impacting its last few seconds or minutes,” he said.

Amir pointed out that chickens were normally slaughtered at the age of nine weeks, but that the bleeding time for chickens is only 90 seconds, which is a mere fraction of time the chicken is alive.

He added that the RSPCA was contradicting itself by associating animal welfare with stunning. “Animal welfare scientists unanimously agree that not all stunning methods provide the same level of welfare. If consumers have the right to know that their meat was religiously slaughtered, then they should also know which method of stunning was used for non-religiously slaughtered meat and which method of stunning the RSPCA recommends over others,” he said.

He explained: “Our proposals for a halal assurance scheme for sheepmeat in England, which are currently under consultation, would feature clear on-pack labelling on the type of halal slaughter to aid consumer choice. This would provide clear information for both Muslim and non-Muslim consumers about what they are buying and offer a level of transparency that, it has been suggested, is currently missing.”

Previous: Opinion: So what is Islamic Marketing & what’s all the noise about?
Next: Malaysia: Local Halal Food Manufacturers Urged To Expand Businesses To Australia