Venison, ostrich, llama and pheasant – perhaps not the first meats that spring to mind at this time of year. 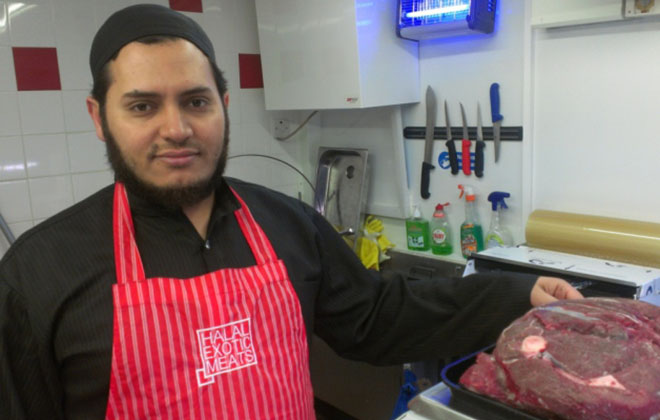 But a Dewsbury retailer is providing exactly that for a market that is growing bigger all the time in Britain – Halal.

Exotic meat has become increasingly popular over the last few years, with people willing to be more adventurous and go beyond the usual chicken, beef and pork.

And now a man from Savile Town is getting in on the act by providing unusual meat that is safe for Muslims to eat. Haitham Ahmed has set up Halal Exotic Meats in Dewsbury Market.

He said: “Halal meat accounts for 20 per cent of meat sold, even though only 3 per cent of the population is Asian.

“Diet habits are changing – people want leaner meat as they are becoming more health conscious. Venison for example is low in fat and cholesterol.”

Mr Ahmed travels to North Yorkshire to hunt the venison that is sold in his store. Islamic law requires that the animal must be bled while it is still alive. Mr Ahmed also soon hopes to provide halal buffalo and perhaps even crocodile.

He added: “We’ve had a really good response so far, people are fascinated by the products and are becoming more adventurous.”