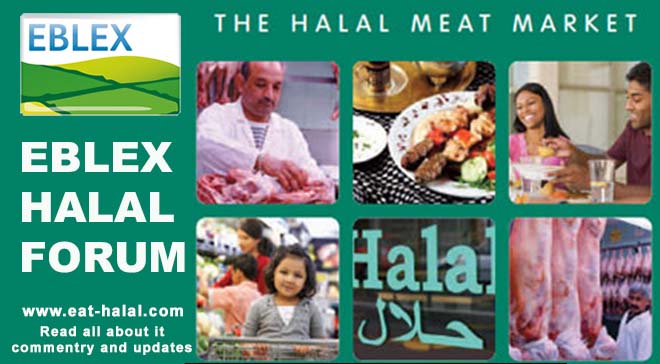 Cross, who spoke to halal meat company bosses in Coventry on 24 October, said 2.8m people in England and Wales were part of the Muslim community. “Fifty per cent of the total sheep meat market in the UK is halal, and 80% is stunned and 20% is non-stunned,” he added.

Despite the stun to non-stun ratio, attendees were shown figures from an Oxford Partnership survey of 500 UK Muslims, the majority of whom (50%) said non-stun meat was acceptable.

“It is vital that the needs of this important sector are understood,” Cross urged. “We (Eblex) realise that, in the halal sector, there is a diverse range of priorities and needs.”

He explained that the Halal Forum was what Eblex believed to be the most “open and transparent” way of Eblex meeting the needs of the sector.

The chairman also noted that the launch of the organisation’s consultation of a halal assurance scheme would allow consumers to make informed choices about the meat they buy, as well as the methods of slaughter used.

Two assurance marks have been proposed by Eblex, along with standards for processors to abide by, to be part of the proposed scheme. Laura Bishop, Eblex marketing manager for quality schemes, told MeatInfo.co.uk before the first Forum last week that the assurance scheme could be similar to its current Quality Standard Mark (QSM).

“Particularly with the Red Tractor and QSM not being able to go on a product that hasn’t been stunned, this is something we have had in the process for a while,” she noted.

However, there was mixed opinion to the scheme, with several members from the industry in fierce opposition to the assurance mark, stunning, one-another’s opinions and the focus on halal being about meat.

“The Eblex report on halal we have seen, from what my experience and feedback I get from the Muslim consumer is that they would prefer non-stunned meat,” one consultant told the Forum.

“What the Forum has presented, I feel they have done a lot of work, since this has become a hot debate in the industry and they have taken measures to understand the situation. But my belief is they have started with the parameters of ‘stun is acceptable’, but non-stunned is not,” he continued.

Yet Shabaz Mohammed, managing director from Pelican, a food purchasing and distribution company, said the consumer must decided whether they want stun or non-stun, He said: “In order for the consumer decide, we have to be open and transparent.

“I have been asking consumers about stunned and non-stunned meat and most of them have not understood what it means. I asked a lot of Muslims the question and they had not a clue and I don’t think they will, unless you change their opinion.”

He admitted that he thought there should be one assurance standard, but noted it would be hard to create one that keeps all sides happy.

Someone has to do it

Concluding, however, Cross said there needed to be a starting point to something like an assurance mark that the whole industry could use. “Someone has to do it – we are the industry body and it is our job to do it,” he stated.

“We are not promoting a view, England has a very large and diverse population and all consumers have a right to an informed choice – it’s a fundamental right and they will vote with their money and they will shop the market.”