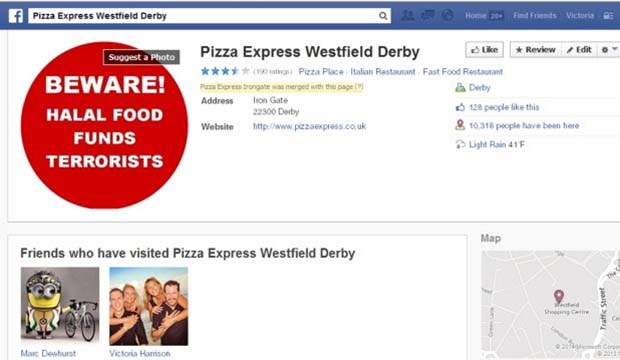 “Beware! Halal food funds terrorists” is currently an image on facebook for pizza express in Westfield, Derby
This is a screenshot of the site/image/message
https://www.facebook.com/pages/Pizza-Express-Westfield-Derby/113554428722004

A FACEBOOK page for a Derby business has been sabotaged to carry a claim that Halal food funds terrorists.

A mystery troll has put a profile picture on the online business site for Pizza Express in Westfield Derby.

On it, the words say “Beware! Halal Foods Fund Terrorists.”

The chairman of Derby’s Pakistani Centre has called the sabotage “a hate crime.”

And Derbyshire Police has said it has received no calls about the online page.

The Derby Telegraph made Pizza Express aware of the sabotage yesterday.

A spokesman for the food chain said: “Facebook automatically opens pages for individual businesses but we don’t run a page for Derby and are not responsible for the profile picture. We’ve asked Facebook to remove the image.”

Last night, the image was still on the Facebook page.

In Arabic, the word halal means permitted or lawful.

It is attributable to all types of food but is most commonly linked to meat.

Halal foods are foods that are allowed under Islamic dietary guidelines.

According to these guidelines gathered from the Koran, Muslim followers cannot consume pork or pork products or eat animals not slaughtered properly or not slaughtered in the name of Allah.

Also not allowed is an animal that has been strangled, beaten to death, killed by a fall, gored to death or savaged by a beast of prey.

Shokat Lal is the chairman of Derby Pakistani centre.

He said: “Whoever set this picture or this page up has clearly done this deliberately to cause problems.

“To me this is a hate crime. Linking halal food to terrorism is completely nonsensical scare-mongering and just another example of hatred and Islamophobia. It is an absolute nonsense and nothing short of disgraceful.”

He said: “This is ridiculous. There is simply no link whatsoever between halal food and terrorism and extremism.

“I eat halal all the time and I am no terrorist.

“The problem here is whichever trouble-maker has done this will leave no trace for anyone to find out who they are so someone can speak to them about the consequences of what they have done.”

The Telegraph tried to contact the Halal Food Authority for a comment but it did not return calls or e-mails.