The British Veterinary Association (BVA) has launched a government epetition to end the non-stun slaughter of animals, to support animal welfare. 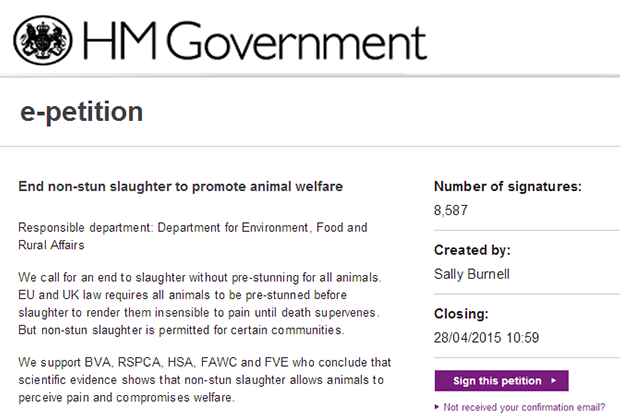 Supported by the RSPCA, the petition calls for an end to the slaughter of animals without pre-stunning. EU and UK law requires all animals to be pre-stunned before slaughter, however non-stun slaughter is preserved for religious practises such as halal and shechita.

“We call for an end to slaughter without pre-stunning for all animals. EU and UK law requires all animals to be pre-stunned before slaughter to render them insensible to pain until death supervenes. But non-stun slaughter is permitted for certain communities.”

The BVA reported that 80% of halal meat was pre-stunned before slaughter, but that hindquarters of animals killed by shechita methods can enter the market unlabelled. As there is no legal requirement for labelling of slaughtering methods, the BVA also called for clearer slaughter-method labelling and post-cut stunning.

David Bowles, RSPCA head of public affairs, said: “We recognise that religious belief and practices should be respected, but we also believe that animals should be slaughtered in the most humane way possible. Non-stun slaughter can result in the animals experiencing very significant pain and distress and that is why we feel more needs to be done to end this suffering.”

BVA president and veterinary surgeon Robin Hargreaves said: “The BVA has long believed that slaughter without pre-stunning unnecessarily compromise animal welfare at the time of death. It affects millions of animals every year and action is long overdue

“When the issue hit the headlines recently, we were overwhelmed by the letters of support from members of the public as well as our own members, so we hope to get a lot of support for our campaign.”

The BVA hopes to receive 100,000 signatures to enable a debate in the House of Commons, and it has already attracted over eight and half thousand signatures at the time this article was published.