For fears of discriminated against Jewish and Muslim communities, in 2010 the UK opposed identifying meat that has been pre-stunned! 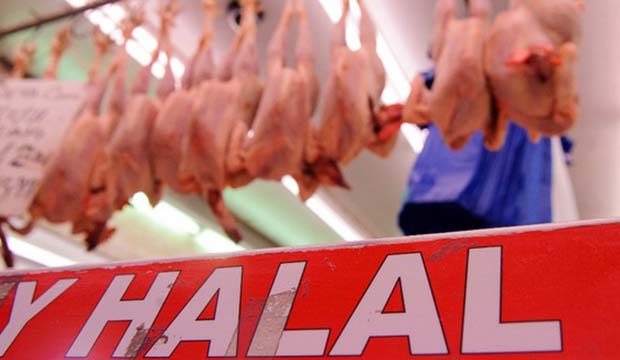 Simply identifying or labelling meat as halal or kosher is unclear for most consumers, Animal welfare groups have claimed

Europe is considering whether meat should be labelled with information about how the animal was slaughtered, a proposal opposed by the prime minister and supermarkets.

The EU move will force the Department of Environment and Rural Affairs (Defra) to clarify its own position following Muslim, Jewish and Christian leaders called for a method of labelling that spells out if food is halal – or what ever other technique of slaughter is utilized.

David Cameron steered clear of the halal meat labelling row by saying debate over labelling of halal and kosher meat must be resolved between retailers and customers. It has emerged that the British government had opposed EU measures that would have needed meat to carry labels confirming whether it came from animals that had been stunned prior to slaughter. As the row over unlabelled halal and kosher meat within the food chain rages on, it has emerged that attempts to introduce a type of labelling had been approved by the European parliament in June 2010.

However, the government declined to support the measures amid issues from Muslim and Jewish groups that it was discriminatory. The European council of ministers then place the proposals out for review and its findings are due subsequent month.

David Cameron indicated on Thursday that he believed the government did not need to intervene in labelling at all. His spokesman told a Westminster briefing that the labelling of meat products was an issue between consumers and supermarkets, adding: “The prime minister’s view is that the approach we currently have is absolutely the right one.”

Groups such as the Muslim Council of Britain and Shechita UK, the organisation that promotes what it describes as the “Jewish religious humane technique of dispatching animals”, hope the evaluation will call for a comprehensive form of meat labelling, rather than one that simply states whether or not animals happen to be stunned.

Shechita UK said it was incorrect to claim that animals slaughtered within the “Jewish humane way” had been not stunned prior to they were slaughtered because the incisions produced to their necks instantly rendered them unconscious. However, animal welfare groups stated identifying whether animals had been stunned before slaughter would be a good step.

“”Well more than 80% of halal slaughter in the UK is pre-stunned, which indicates the animal is rendered unconscious before the throat is cut,” said Robin Hargreaves, president of the British Veterinary Association. “None from the animals slaughtered by the kosher method are pre-stunned. We wish to see labelling that explains this, instead of halal or kosher labelling that would still be unclear for customers.”

But a spokesman for Shechita UK said it was essential that customers received all the facts, and reiterated its call for the introduction of comprehensive labelling.

“It appears bizarre and incongruous to pre-suppose that consumers’ rights don’t extend to informing them that an animal has been mechanically stunned prior to slaughter by captive bolt shooting, gassing, electrocution, drowning or any of the other approved methods,” he stated.

However, religious leaders are concerned that the debate has been distorted into a row over whether all customers should know whether the Muslim and Jewish methods of slaughter, halal and schechita respectively, have been used in processing the meat.

The issue has moved up the political agenda because of a campaign by the British Veterinary Association and RSPCA against slaughter where no stunning is involved. Campaigners insist the issue is about informing consumers. “We don’t want to get involved in the question of halal versus non-halal. If the animal welfare issue is taken care of, we don’t have a problem,” said David Bowles, head of public affairs at the RSPCA. He did hope for some movement on labelling, however. “It is a fairly neutral issue and the government has previously supported giving consumers choice.

The Food Standards Agency estimates 88% of animals are stunned before slaughter by the halal method, which requires a Muslim to kill the creature by hand, severing the throat and draining if of blood. The Jewish method, shechita, however, cannot involve pre-slaughter stunning.

Andrew Opie, director of food and sustainability at the British Retail Consortium, said: “British retailers know that animal welfare standards are a key issue for their consumers. All own-brand meat from major UK supermarkets comes from animals that have been stunned before they are killed and all our members have confirmed all their own-brand fresh meat is from animals that have been pre-stunned before slaughter.

“There appears to be some confusion over meat that may be produced for a potential halal market but is sold as own-brand, but all those animals are stunned prior to slaughter. As the overwhelming majority of meat sold in UK supermarkets is own-brand and from animals that have been stunned prior to slaughter, we do not see the requirement to separately label meat based on the method of slaughter.”

UK blocked EU labelling of halal meat stunned before slaughter
For fears of discriminated against Jewish and Muslim communities, in 2010 the UK opposed identifying meat that has been pre-stunned! Europe is considering whether meat should be labelled with information about how the animal was slaughtered, a proposal opposed by the prime minister and supermarkets. The EU move will force the Department of Environment and Rural Affairs (Defra) to clarify its own position following Muslim, Jewish and Christian leaders called for a method of labelling that spells&hellip;

Previous: Kuwait: 3rd Gulf Conference on the Halal Industry and Services
Next: Out of halal certification chaos comes criticism and Islamophobia?