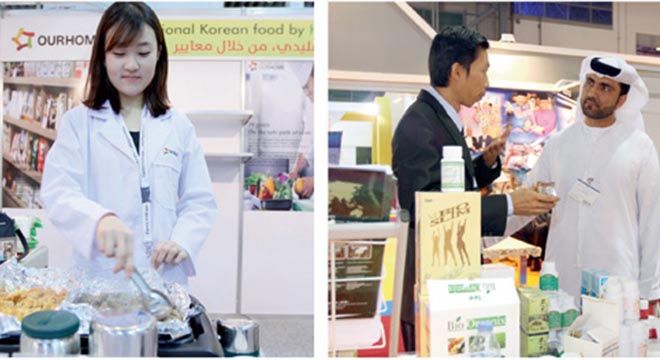 The halal food industry is gaining momentum in conventional and non-conventional markets across the globe due to its hygienic and safety qualities, say exhibitors at second OIC Halal Middle East Exhibition and Congress.

The industry stakeholders said investors are increasingly looking opportunities to make investments in halal food products to capitalise growth in this untapped market across many geographies. They also hailed various initiated launched by the UAE government to promote halal industry and said Dubai has strong potential to become the capital of Islamic economy in coming years.

The three-day exhibition and congress attracted exhibitors from non-conventional halal food markets like Italy, South Korea, Russia and Japan, among others. They were upbeat about the outlook of halal food market even in those countries where Muslims are in minority. Over 125 exhibitors and 200 delegates are attending the three-day event, which concluded on Wednesday.

“Halal food is picking up in Italy and we are confident of its success in the country because of its popularity even in non-Muslim population,” Mansur Giuseppe Baudo, audit manager at Halal Italia, told Khaleej Times.

He said Halal Italia is the Italian organisation for Islamic certification and it is also recognised from UAE’s Ministry of Environment and Water and Majlis Ugama Islam Singapura — Islamic Religious Council of Singapore.

“The UAE ministry issued a decree in 2012 to recognise Halal Italia certification, and now our certification is acceptable in all other countries of Gulf Cooperation Council including Saudi Arabia, Kuwait, Qatar, Oman and Bahrain,” he said.

Baudo said halal food is very popular in Italy and playing a key role in establishing close relations between East and West.

Echoed the same views from another non-conventional market, Korea Halal Association advisor Jo Young Chan said halal food prospects are bright in the country. “Our association is a non-profit body that has been formed to provide a common platform to stakeholders in Korea halal industry,” he said.

Chan said the association right now has only 10 members, but due to growing popularity and demand of halal products he is confident of about 200 to 300 members in next five years. “

Halal food industry is growing rapidly in Korea despite low Muslim population and the association will start issuing its own halal certification from next year,” he said.

The exhibitors from Muslim nations are also buoyant about the future of halal food industry and said enormous opportunities exist in this fast growing segment. They underlined the need to uniform standards for halal certifications to realise the true potential of halal trade even in conventional markets of Muslim majority population countries.

“Halal food is progressing well and we see a promising outlook for the industry in coming years,” said Darningsih Rustiadji, director at Indonesian firm Deka Adiguna.

She said Indonesia is a big potential market for halal food and demand for halal products is on the rise as people are more cautious about edibles and shifting towards halal items.

“Halal food is not only for Muslims, it is getting popular even in non-conventional markets in Europe and Asia as we secure orders for our products from Netherlands, Korea and Japan,” she said, and adding that there is need to explore markets in South America.

Rustiadji said Middle East is a big potential market for Indonesian halal food products. “We have more than 100 halal products and secured reasonable orders from Saudi Arabia and the UAE,” she said.

Hamed Abedian, commercial manager at Iran’s Sefid Goosht Hamoon Company, said halal food future is good due to its growing demand and awareness in major markets. “We deal in fresh and frozen fish, chicken and beef. We are participating in the exhibition for the first time and hope to get good business,” he said.

Abedian appreciated the halal exhibition and congress to promote the halal food products and called for more strenuous efforts to explore new markets across the world.

Previous: France: Isla Global brand will now be certified by AVS
Next: Malaysia: Halal products fair to build support for SMEs in 2014