The listing underlines Dubai’s rapid progress towards becoming the capital of Islamic economy: 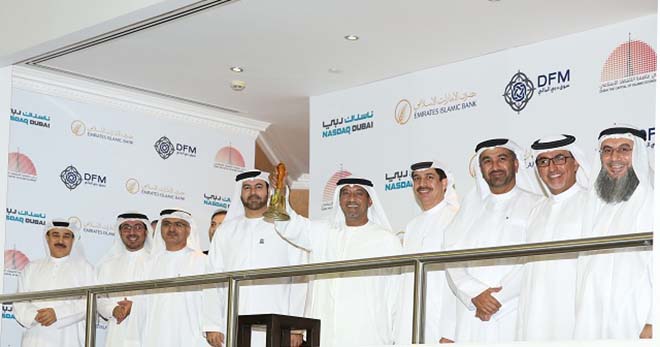 Shaikh Ahmad Bin Saeed Al Maktoum, President of Dubai Civil Aviation and Chairman and CEO of Emirates airline and Group, rings the bell to launch the listing of two Emirates Islamic Bank sukuk worth a total of Dh3.67 billion on Nasdaq Dubai.

The listing of EIB’s Sukuk on Nasdaq Dubai took place in September.

The yield on the HSBC/Nasdaq Dubai US Dollar Nasdaq Dubai-Listed Sukuk Index has fallen to 3.76% from 4.5 per cent at the beginning of September, implying greater demand for the securities in the index.

“EIB’s preference for an international exchange located in its own region made NASDAQ Dubai the natural listing venue for its Sukuk. As well as an excellent regulatory environment, the exchange provides high visibility for EIB’s securities, which supports the bank’s strategy of growth and expansion in the UAE and internationally.”

Mohammed Abdulla Al Gergawi said: “EIB’s listings have provided further momentum to the ‘Dubai, the global Sukuk centre initiative’ launched in February by His Highness Sheikh Mohammed Bin Rashid Al Maktoum, UAE Vice President, Prime Minster and Ruler of Dubai, in line with His Highness’s vision to position the Emirate as the Capital of Islamic Economy globally and in light of the direct supervision of His Highness Sheikh Hamdan Bin Mohammed Bin Rashid Al Maktoum, Crown Prince of Dubai and Chairman of the Executive Council. This vision is being achieved through the dynamic activities of prominent banks such as EIB as well as other regional and international institutions that aim to fully develop the Islamic capital markets sector, for the benefit of investors and the development of the wider economy.”

Essa Kazim, Chairman of Dubai Financial Market (DFM) and Secretary General of the Higher Committee said: “Dubai’s Islamic financial markets are poised for a new era of expansion in scope as well as size, through the development of new products and services. The Emirate’s exchanges will continue to play their major role in meeting the evolving needs of issuers and investors for efficient and secure financing and investment solutions.”

Hesham Abdulla Al Qassim, Vice Chairman of Emirates NBD and Chairman of EIB, said: “Emirates Islamic Bank is committed to broadening the Sharia-compliant services that it provides across its corporate, business and personal banking offerings, as well as to providing education to the public about the advantages of Islamic finance. By issuing and listing its own Sukuk, the bank has further strenghtened its involvement with and support for the Islamic capital markets.”

Abdul Wahed Al Fahim, Chairman of NASDAQ Dubai, said: “NASDAQ Dubai’s intention to become the world’s largest exchange for Sukuk by listed value remains on track. We look forward to welcoming further issuers from around the world as well as our own region through our streamlined admission procedures and we are committed to enhancing the post-listing services that we offer to them and to investors.”
The listing of EIB’s Sukuk on NASDAQ Dubai took place in September.

The yield on the HSBC/ NASDAQ Dubai US Dollar NASDAQ Dubai-Listed Sukuk Index has fallen to 3.76% from 4.5% at the beginning of September, implying greater demand for the securities in the index.

Previous: Opinion: Are Muslims Allowed to Eat Kosher according to Islam?
Next: UAE: Dubai to Host Seminar on Halal Food Safety