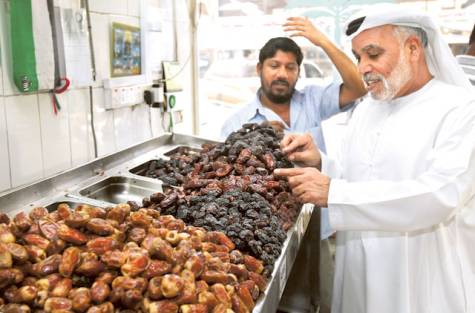 An Emirati selects the variety of dates on a display at a date shop at Mina Market in Abu Dhabi. As a food hub, the UAE can export more of its national produce.
Image Credit: Abdul Rahman/Gulf News Archives

Abu Dhabi: A UN agency said that the UAE could soon become a regional food hub, even though the country is not a food producer by nature. This would be achieved through the implementation of ambitious policies, and the drawing up of a federal food safety law.

“As a food hub, the UAE would import commodities and ingredients, and use local resources to repackage or redistribute them. It would also export more of its own national produce, such as dates and spices,” Gauldie said.

“One of the first steps in achieving the food security goal is to formulate a federal food safety law that harmonises action plans and strategies in different emirates,” he added.

The Ministry of Environment and Water is working to establish such a law, with inputs from various emirates.

The FAO, which works to improve global nutrition, increase agricultural productivity, enhance food security and contribute to economic growth, conducted a two-day workshop that concluded in the capital on Wednesday. The workshop provided advice to about 30 UAE officials on related matters.

“A draft law already exists. We at the FAO conducted a nationwide assessment earlier this year and are now working to present results and observations that indicate whether official controls in the UAE comply with international norms,” Gauldie said.

In addition to making the UAE a food hub, the legislation will also help ensure food security: the assurance that the country continues to have a predictable amount of enough safe food for its residents.

“This is especially important as many emirates import much of the food consumed. For example, Dubai imports about 90 per cent of its food. Moreover, achieving food security would help build trust in the UAE’s position as a food hub,” Gauldie said.

The law is expected to address all food-related issues, including quality, food testing laboratory standards, agricultural practices, and regulations for food business operators such as restaurants, canteens, supermarkets and grocery stores. And once the law is in place, it could recommend special investigations into the quality of food and production processes.

“At present, there are different approaches to food safety in each of the emirates. A clear policy option is to harmonise these approaches, build capacity for food security and then identify a suitable central competent authority to enact the law and monitor its implementation,” the official said.

The process of refining the draft law is also intended to ensure, among other things, that all emirates define the concept of food, and what it includes, in the same manner.

“For example, it could include all items that provide nutrition, while leaving out things like drugs,” Gauldie said.