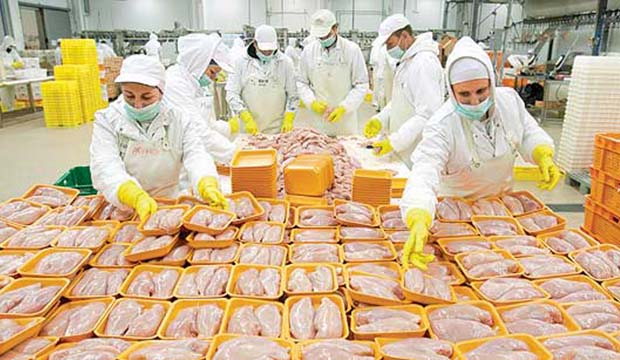 lllegal halal food production increased due to the global halal market exceeding $1 trillion in size and it is expected to hit $2 trillion by 2030. (Photo: AP)

Explaining that an increase in the number of non-Muslims also preferring halal foods, food prepared in accordance with Islamic rules, has led to the uncontrolled growth of the halal food sector, Associate Professor Winai Dahlan, the founding director of the Halal Science Center (HSC) at Chulalongkorn University, told Sunday’s Zaman in a recent interview that this growth has also brought risks as consumers do not read the ingredients on the halal labels carefully enough and are too trusting of halal labels.

“If you feel you are safe, that means you are in danger, and, as you know, most accidents occur because of excessive confidence. The situation is the same with the halal food sector. The certifications are not strict enough and consumers should certainly analyze the brands and the ingredients of products because halal-labeled products sometimes turn out to be haram — unlawful,” he stated. Noting that 13 percent of the halal products they have tested in a study proved to be haram, Dahlan said the study shows the sector requires more control and frequent inspections.

Dahlan stated that illegal halal food production has increased due to the global halal market exceeding $1 trillion in size and the market is expected to reach a value of $2 trillion by 2030 as non-Muslims are also increasingly showing interest in the food and competition is rising. Interestingly, the main exporters of halal food products are non-Muslim countries such as Brazil, the US, China, India and Thailand, and Turkey is one of the new countries that aims to have a large share in the sector. However, Dahlan states it is not easy to produce halal foods as it requires serious infrastructure investment, expertise and a conscientious workforce.

HSC, which opened 18 years ago, has a 90 percent Muslims workforce and was the first institution established for the study and certification of halal foods. It also has an advisory board that consists of respected Muslim scholars and implements projects with the private sector in Thailand as the Asian country aims to increase its share in the halal food market. It provides services such as halal production, monitoring and inspection to companies while also providing certification to trainees who want to learn about the sector.

Noting that the center analyzes many products from cosmetics to pharmaceuticals, from food to textiles, Dahlan underlines the analyses could prove if a piece of meat comes from a halal-butchered animal or not. He stressed that seafood, of which some is halal, can become haram during processing when additional ingredients are added, while noting HSC tests proved that some canned seafood product contains pork, which is forbidden in Islam.

“There is also significant pork content in cosmetics; one of our most in-depth studies was coding the items that contain pig products, and then creating an iPhone application which has the list where consumers can easily access the data,” Dahlan said. He also reiterated that some raw halal products could become haram when being packaged and distributed as measures to preserve products could include gelatin, which is made from pork.

According to Thai government officials, the country, which has a halal food sector that is growing by 20 percent annually, plans on expanding to Middle Eastern markets in the medium term, including Turkey.

An official said: “The halal food sector was created for the country’s Muslim citizens. But, the increasing demand led it to become an internationally trading sector. We have progressed a long way through education, training and investments in halal production and have strong infrastructure and product variety. We see that awareness of halal food products are increasing in Turkey and we have a high number of people from Turkey attending the HSC training. We expect that halal food products will soon be included in our trade with Turkey.”