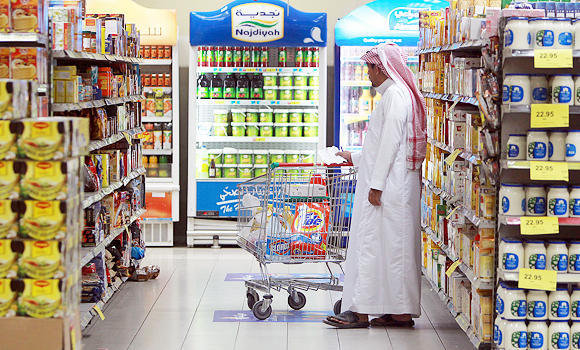 JEDDAH – Gulf countries will consume 49.1 million tons of food annually by the end of 2017, with the UAE the largest consumer per capita among the six Arabian Gulf states, according to investment bank Alpen Capital’s revised 2013 GCC Food Industry Report.

The report said that over the next four years, the GCC region’s food consumption is expected to grow at a Compounded Annual Growth Rate (CAGR) of 3.1 percent, while the UAE’s per capita food consumption currently stands at 1,486kg per year – 27 percent more than Oman, which consumes 1,095kg of food per capita annually.

Saudi Arabia currently consumes 872kg of food per capita, Qatar 852kg, Kuwait 634kg, and Bahrain 453kg per capita, while by 2017, per capita food consumption for the entire region is forecasted to reach 983kg.

Owing to its considerably larger population, Saudi Arabia will continue to be the biggest food consumer by volume, accounting for 59 percent of GCC food by 2017 (29 million tons), while Qatar’s appetite will outpace that of other Gulf countries, increasing by 5 percent by 2017 to reach two million tons.

Looking to satisfy the growing appetites of the region will be more than 1,000 food, beverage and equipment companies from 40 countries at SIAL Middle East, taking place on Nov. 24-26 at Abu Dhabi National Exhibition Centre (ADNEC).

Held in strategic partnership with Abu Dhabi Food Control Authority (ADFCA), SIAL Middle East 2013 is the region’s fastest growing professional business platform for the food, drink and hospitality industries. The three-day event is part of SIAL Group, the world’s largest network of professional B2B food exhibitions which include SIAL Paris, SIAL China, SIAL Canada, and SIAL Brazil. Mohammed Jalal Al Rayssi, Director of Communication and Community Service at ADFCA and Chairman of the SIAL Middle East organizing committee, said: “Population growth, increasing income per capita, and a booming tourism industry are the main drivers of food consumption in the GCC region, while food is currently the largest segment of consumer expenditure in the entire region.

“All reports indicate a fast growing market, with consumer spending on food in the GCC expected to reach $106 billion in the next five years. This clearly underlines huge opportunities for private sectors players to expand within the region, and SIAL Middle East provides the all important stage to capitalise on the opportunities that lay ahead,” he pointed out.