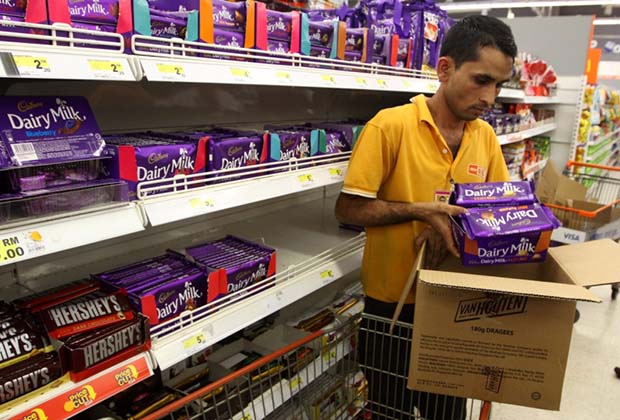 The scandal over the pig DNA discovery in Cadbury Chocolates, banned under Islamic dietary laws, has sparked outrage among some Muslim groups in Malaysia, who have called for a boycott on all products made by Cadbury and its parent Mondelez International Inc.

The Health Ministry in Malaysia recently carried out tests on two samples of the Cadbury chocolate; Cadbury Dairy Milk Hazelnut and Cadbury Dairy Milk Roast Almond which both contained pig DNA. This was of particular importance as these products were certified halal by the Islamic Development Department (Jakim) the official body that is authorised to issue halal certificates in Malaysia. It is conducting further tests on the suspect Cadbury products to confirm the initial findings by the health ministry.

Malaysian Islamic authorities tried to cool anger against Cadbury by saying it remained unclear if the contamination was the company’s fault.

“People need to understand that we can’t immediately take action against Cadbury when there’s no solid evidence yet or if contamination occurred in the factory itself or if it was external factors,” said Othman Mustapha, the director general of Malaysia’s Department of Islamic Development, or JAKIM.

“What’s happening to Cadbury now is akin to a person who’s remanded and placed in lockup. They have not been found guilty so this is just a suspension,” he added.

The find has reignited discussion about the sensitive issue of halal products. For Nadia Aulia Rahmi, 22, who is an avid Cadbury consumer in Indonesia, the news coming from Malaysia have made her doubtful about the trustworthiness of halal certifications.

“As a Muslim country, Malaysia should have higher standards for the halal certification process when compared with Indonesia, in which the regulations aremuch more relaxed,” Nadia.

Nadia, who says she generally researches prior to purchasing, and she depends on the halal mark to help save her from uncertainty for her stringent Muslim diet.

The Indonesian Food and Drug Monitoring Agency (BPOM) previously said that it had not issued import licenses for the two recalled Cadbury products and that such products sold locally were imported illegally.

The agency also said it was working to make sure that the haram products did not enter the Indonesian market.

The MUI’s food and drugs unit, which has the authority to issue halal certifications, promptly tested 10 Cadbury products following the news in Malaysia. According to the unit, no pork DNA was found in any of the products.

Chairman of North Sumatras Indonesian Consumers Institute Foundation (YLK) for North Sumatra Abubakar Siddik called on shoppers to be cautious when purchasing Cadbury Dairy Milk since it has no halal certification from the Indonesian Ulemas Council (MUI).

Cadbury Indonesia says all of its products sold in Indonesia are halal.

The Saudi Food and Drug Authority (SFDA) has randomly taken out a selection of Cadbury chocolate bars from the market to test for presence of porcine DNA.

Pork is strictly prohibited in Islam. Saudi Arabia, the religion’s birthplace, adheres to one of the world’s most stringent forms of the faith.

A statement reported by the Saudi Press Agency the SFDA said that a routine examination for non-halal ingredients in food products by the Malaysian Health Ministry confirmed the presence of porcine DNA in Cadbury Dairy Milk Hazelnut and Cadbury Dairy Milk Roast Almond bars.

The SFDA stated that it then took samples of the product that had been imported from various countries with various batch numbersto make sure that they did not contain traces of pork, which is forbidden in Islam.

“Cadbury products manufactured in Malaysia are not registered with us since we import from other countries such as Egypt and the United Kingdom,” Salah Al-Maiman, deputy executive chairman of the food section at the SFDA, said in the statement.
“Nevertheless, the SFDA will take strong steps if any sample tests positive for porcine DNA traces,” he said.

Saudi Arabia and Indonesia test Cadbury chocolate for pork
After chocolate sold in Malaysia found to contain pig DNA,more Muslim countries including Saudi Arabia and Indonesia test products from British confectionary giant. The scandal over the pig DNA discovery in Cadbury Chocolates, banned under Islamic dietary laws, has sparked outrage among some Muslim groups in Malaysia, who have called for a boycott on all products made by Cadbury and its parent Mondelez International Inc. The Health Ministry in Malaysia recently carried out tests on two samples&hellip;