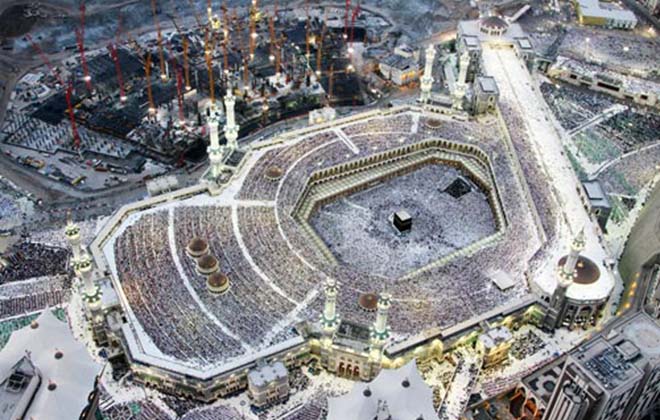 Thousands of Muslims gather at the Grand Mosque Masjid Al-Haram in Islam’s holiest city of Mecca and home to the Kaaba to perform umrah, or minor pilgrimages in this file photo. (AFP/Amer Hilabi)

Among the various travel packages of umrah, there are also extended packages where pilgrims can also visit other countries.

Al-Aqsa Mosque, for example, which is located within the Old City of Jerusalem, is among the favorite additional destinations after performing umrah. Al-Aqsa, also known as “The Farthest Mosque”, is one of the holiest places in Islam.

Islamic tradition holds that the Prophet Muhammad led prayers toward Al-Aqsa until the 17th month after the emigration, when God directed him to turn toward the Kaaba.

Being in the Old City, which is controlled by the Israeli government, the mosque remains under the administration of Palestine.

“To fully understand Islamic teaching, a Muslim is encouraged to learn Islamic history by, among other things, visiting the religion’s historical places,” Muhammad Ridwan of ESQ Tours and Travel told The Jakarta Post recently.

“Within the umrah and Al-Aqsa [to Jerusalem] package, our clients can learn more about the place of Prophet Ibrahim [Abraham] and the mosque itself.”

“The time arrangements will be nine days for the umrah in Saudi Arabia and the remaining days will be for the Al-Aqsa trip,” said Ridwan, adding that his agency usually entered Al-Aqsa via Jordan.

Ridwan suggested December as the best month to visit Al-Aqsa. “The weather is great. It’s winter, so the climate can go down to minus five degrees Celsius. However, you can get that great feeling of visiting Al-Aqsa in the winter.”

Tazkia Tours and Travel offers umrah plus Andalusia in Spain, among other packages, to educate its clients on Islam in Europe.

“It must be understood that Islam isn’t just in Saudi Arabia. There were times when the religion’s supremacy saw it spread to Europe,” said Mirna Rafki of Tazkia.

“Back in the days when Islamic soldiers conquered Andalusia, the area was filled with Islamic civilization. Now, we can witness Islam’s legacy in some of Spain’s architecture, such as in the Mosque-Cathedral of Cordoba.”

“Besides the regular nine-day umrah package, we also provide clients with umrah plus Turkey for a minimum 12-day trip, umrah plus Europe — Germany, Switzerland, Spain or Belgia — for a 15-day trip, and thematic packages,” she said.

The thematic packages, which are conducted once a year, include umrah quantum, which gives extra spiritual guidance to clients, and umrah for men only, which gives extra adventure trips such as visiting the Cave of Hira on Jabal Nur Mountain — some 3.2 kilometers from Mecca.

“Umrah plus Turkey or Europe and the thematic packages are usually held in March because the weather isn’t too cold, a good time for traveling,” she added.

Indonesian Association of Haj and Umrah Private Operators (Himpuh) secretary-general Muharram Ahmad said mixing umrah with a holiday, especially to Islam’s historic sites in countries around Mecca, would give pilgrims a deeper understanding of the religion.

“Places like Al-Aqsa mosque [in Jerusalem], Egypt and Istanbul are part of Islam’s history,” he said.  “I think adding extra holiday trips [to the aforementioned sites] to umrah will be great because it will give pilgrims more insight and information about their religion.”