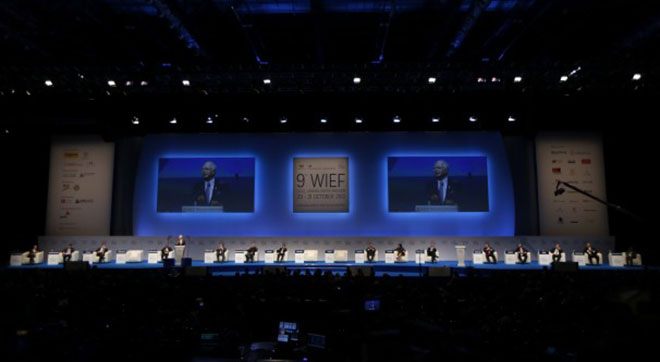 Annual WIEF conference exhibits motivation as well as sector’s constraintsAt the World Islamic Economic Forum in London last week, the UK Government made its pitch to become a global hub for Islamic finance.

In the midst of that PR effort, it announced plans for a $200 million (Dh734 million) sukuk issuance, the first from any government outside the Muslim world. That’s a very modest sum in itself, but a gesture that is taken to be of symbolic significance.

On a world view, it may re-awaken impressions of the internationalist tradition of London in its history and outlook. Indeed, many delegates who subsequently took to the stage were full of praise for this sovereign initiative, giving it landmark status.

Over two thousand delegates attended the occasion, the ninth in the series, described as the first to be held in a “non-Islamic” country. Dubai is set to host the tenth, in November next year.

A seasoned observer might wonder whether this particular gathering (the “Islamic Davos”), in its reclaimed dockland setting, amounted to serious business, any more than the original template of the annual jaunt for the self-appointed great and good to an Alpine resort.

Yet, equally, it isn’t difficult to imagine that there is considerable potential to be tapped from such a mixing of very interested parties, particularly those active in the financial markets.

For one thing, given that the revealed deal-making capacity of the City of London and its denizens over the centuries is so well renowned, this was quite a networking opportunity for the bankers and associated service industry representatives eyeing the Sharia-compliant sector as the next big thing, again, following the systemic hiatus of the global financial crisis.

Perhaps the most pointed observation to make, though, is that there remains so much talk about the need for harmonisation of principles, and homogeneity of products and documentation, for the Islamic sector to aspire to maturity and indeed maintain its rate of growth. At the moment the much-bemoaned evidence is of regime fragmentation on all sides.

This theme is so relentlessly familiar that it seems amazing that no concerted effort has been made to initiate a comprehensively international means to advance a convergence process and give it critical mass.

Platform speakers, including UAE central bank governor Al Suwaidi, frankly disclosed their preoccupation mainly with the efforts of their own respective countries to achieve harmony in their home jurisdictions, while leaving the issue of cross-border collaboration to other, impliedly later mechanisms, or with international regulators, namely AAOFI and IFSB.

British Financial Secretary to the Treasury Sajid Javid, while moderating a session of representatives practising in international Islamic finance, seemed gently to ask whether London might serve as the locum for such global efforts. The remark quietly passed.

Perhaps it is simply that for the moment there is only a relatively downbeat assessment to be found in this regard. My own experience of this field suggests there continue to be serious fractures of opinion not only between market practitioners, regulators and scholars, but also among themselves, and across regions. There is also a clear sense that different centres are competing for market share and leadership.

Referencing this conundrum, Walid Sarieddine, head of Islamic finance at Sumitomo Mitsui Banking Corporation, advised a specialist session on capital markets that he expected “standardisation generally will remain an open debate for some time to come”.

As Omneya Abdelsalam, director of Aston University’s Islamic business and finance research centre, informed me, it has to be recognised there are different models in play, “complete, [also] bottom-up, and top-down” in their respective, national approaches. However, “recently the Islamic Development Bank in Jeddah called for the creation of a global Shariah supervisory board, which would offer greater uniformity for the industry.”

Issues of interpretation and the scope for pragmatism clearly remain very much in the air. But there is the possibility that dialogue might arise from the WIEF that could conceivably make a worthwhile breakthrough: to find a better, workable path for the Islamic finance sector, so that it may reach towards its far greater potential.

As I was reminded by a delegate, for all the big numbers being quoted for the industry’s current scale and prospective coverage, right now its stake in the global financial system is very small. Some concerted application is needed by its participants and proponents to enable it to grow to the substantial profile that it could obviously attain.

The limited size of the UK’s proposed sukuk may relate partly to the likely state of trading in the market. Any form of issuance may have only a limited window of opportunity, although there could well be substantial interest from investors.

Through 2013 conditions have become markedly less favourable for fixed-income instruments, US Treasury bonds being unnerved by the Federal Reserve’s flirtation with tapering its monetary stimulus programme.In the Gulf sukuk issues have been repeatedly overbid, then suffered price reaction in the secondary market.

These Islamic bonds, still a niche investment globally, and subject to international funds flows at the margin led by conventional benchmarks, might find traded stock under pressure.

The growing liquidity among investors in sukuk can realistically only go some way as an offsetting influence to cushion that effect.