CRESSY, Australia – A Muslim refugee from Africa deftly slits the throat of an unconscious sheep, starting the animal on its final journey from Australia’s island state of Tasmania to a dinner plate in Dubai.

In doing so the slaughterman and his Tasmanian employers are also sending a clear message to Australian businesses that complain they aren’t competitive anymore because of the crowding out effect of the resources boom — those who innovate and adapt will succeed.

Tasmanian Quality Meats (TQM), based in this small town some 30 kilometres (16 miles) south of Launceston, is a locally-owned processor of lamb, sheep and veal that is making a name for itself by winning business in markets that used to be the preserve of larger operators.

The company, which is certified halal and therefore can export to Muslim nations, currently processes up to 2,000 animals a day for customers in Dubai, Jordan, Bahrain, Kuwait and more recently, Vietnam.

Australia is the world largest exporter of mutton and live sheep and the second biggest for lamb, and shipped out some 457,000 tonnes of lamb and 183,000 tonnes of mutton in the year ended June, according to industry group Meat and Livestock Australia.

While TQM is still a minnow in the wider industry, it is showing that market share can be grabbed from bigger players, even when the deck is stacked against you.

Co-owners Brian Oliver and John Talbot have to deal with the shrinking of their local market, which happened when the giant supermarket chains started under-cutting the neighbourhood butchers.

When they switched to focus on exports, they had the additional cost of getting their produce from Tasmania to Melbourne, from where it is air-freighted or shipped to customers.

This extra charge is the bane of many Tasmanian export businesses, given that shipping from the island to Melbourne can be almost as much as the cost of shipping from the major Victorian port to Southeast Asia.

TQM runs a lean operation in order to boost productivity and efficiency and keep costs down.

“We don’t have any baggage, we aren’t top heavy,” Talbot said in a Dec. 17 interview.

He’s also being modest as both him and Oliver have taken a property that used to be a snake farm producing anti-venom and turned it into a model of efficient production that now employs about 80 staff and was recently named regional exporter of the year at the 51st Australian Export Awards.

Both Talbot and Oliver believe they are tapping into a growing market and that air-freighting lamb and other meats is preferable to the controversial practice of exporting live animals.

Australia has been rocked in recent years by a series of reports outlining abuse and mishandling of live animal exports, with the 2 million sheep shipped annually worth about A$200 million ($178 million), about one-sixth the value of processed lamb exports.

Colin Read, TQM’s quality assurance manager, believes slaughtering the animals in compliance with halal rules in Australia and then exporting the carcasses either whole or cut into large pieces is a far better outcome.

“It’s the way to go, it’s a far better outcome for everybody,” he said while giving a tour of the food processing plant.

A lamb killed at TQM on a Monday can be at the customer in the Middle East by the Wednesday, meaning it is as fresh as live exports, but also of better quality as the animal hasn’t had to suffer a long sea journey in poor conditions.

TQM isn’t going to rest on its laurels, with Oliver saying they plan to focus on producing and marketing premium lamb, as Tasmania is the only Australian state prohibiting the use of hormones that promote growth.

These hormones boost the speed at which the lamb grows, and not using them does mean that Tasmanian livestock takes longer to reach the necessary weight and condition for slaughter, but Oliver says the quality is better and the meat is free from additives.

What this small company is doing is showing that the so-called “Dutch disease” that has afflicted Australian manufacturing as the result of the commodity boom can be overcome.

Dutch disease is a reference to the apparent decline of manufacturing competitiveness in the Netherlands after the discovery of large natural gas reserves in 1959, which boosted the value of the local currency.

The Australian dollar may have weakened from its all-time high of $1.10 in July 2011 against its U.S. counterpart to around 89 U.S. cents, but it is still well above the long-run average of closer to 75 cents.

The recent depreciation hasn’t been enough to prevent General Motors’ Australian unit Holden, Ford, Caterpillar and others from announcing plans to shut manufacturing operations in Australia.

Even commodity producers, the supposed beneficiaries of the boom in demand led by China, are complaining about costs blowing out because the high Australian dollar increases the U.S. dollar cost of labour and other domestically-sourced goods and services.

What TQM has in common with the Australian operations of Ford and the others is that they found they weren’t competitive, their domestic market was small and export opportunities appeared limited.

What they don’t have in common is that TQM, unlike the others, changed direction to focus on exports in new markets, invested in the business and innovated around the problems of the high Australian dollar.

TQM started in late 1997 by buying a shuttered plant that had processed small numbers of wallabies and venison and building it into a cutting-edge operation supplying halal meats to a growing number of international markets.

It may be flippant to suggest General Motors should have found the equivalent of the “halal Holden,” but what TQM does show is the demise of Australian manufacturing and exporting on the back of the resource boom is far from inevitable. (Editing by Michael Urquhart) — Clyde Russell is a Reuters market analyst. The views expressed are his own.– 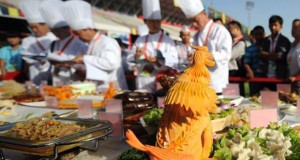