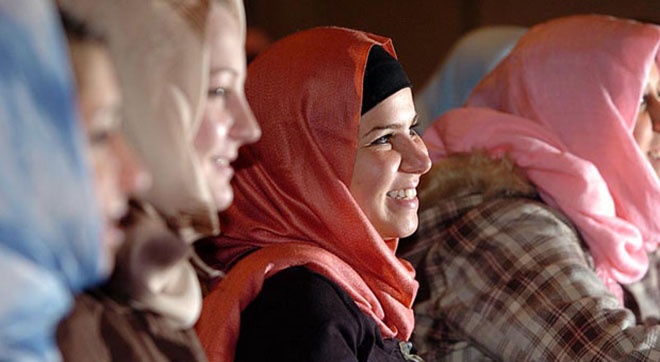 When they left their native countries and chose an alien land to settle, says the report, they had no option but to work as labourers in key industries like cotton mills, looms, steel foundries and car factories to re-shape post-War Britain, unsure if their dream of building a new home will ever come true.

But, 50 years on, thousands of them work in higher managerial, administrative and professional occupations.

“The Muslim Pound – How Muslims Add Value to Britain’s Prosperity” was released by the Muslim Council of Britain ahead of the just-concluded 9th World Islamic Economic Forum Meet 2013 in London.

Stunned by the report, a group of Muslim intellectuals in Malegaon, a Muslim-dominated town in Maharashtra’s Nashik district, held a seminar Tuesday) to discuss its content, said one of their leaders, Aleem Faizi, executive editor of Unmid.com.

“We plan to invite some of the people (involved with the report) to help us and implement measures to make the Muslims here also prosperous,” Faizi told IANS on the phone.

The report said that when many Muslims left their native countries to choose an alien land, they started out as labourers in industries like cotton mills, looms, steel and automobiles to re-shape post-war Britian – unsure if their dreams would ever materialize.

Five decades on, there are more than 10,000 millionaires and thousands of others are engaged in higher managerial, administrative and professional occupations.

“From coffee houses in Elizabethan London to curry houses in modern day Britain, thousands of Muslim-owned businesses have made a significant contribution to the UK economy, and, by extension, the cultural life of Britain,” the report said.

In London alone, an estimated 33.6 percent of small to medium enterprises are Muslim-owned. With over 13,400 Muslim-owned businesses, they have created more than 70,000 jobs and some have gone to become big household brand names.

“There is an estimated 10,000 Muslim millionaires in the UK with liquid assets of more than 3.6 billion pounds. And there are more than a dozen British Muslims listed in the 2013 Sunday Times Rich List of the most affluent in the UK. Some estimate the amount that the community is contributing to the UK economy to be about 31 billion pounds,” the report revealed.

Another 114,548 Muslims in England and Wales occupy higher managerial, administrative and professional occupations with successful British Muslim entrepreneurs contributing not only to the country’s prosperity but also to the fabric of British society and act as role models, the report said.

As per the 2011 Census, London had a total population of around eight million including one million Muslims.

Presenting a global diversity, the report said that it is only matched by the diversity of the Hajj where Muslims from all over the world converge on Islam’s holiest city Makkah for the annual pilgrimage.

Muslim connections from the Atlantic to the Pacific have helped Britian facilitate trade to new and emerging markets and the community has created new drivers for growth due to the the requirements of the Muslim faith.

Citing an example, the report said that the need to have food adhering to Muslim dietary requirements has led to a burgeoning Halal food industry to cater for this, and a major share in the $1.2 trillion global halal lifestyle market.

According to a study in 2001, the British halal industry is estimated at 700 million pounds, though it is expected to be far higher – in excess of one billion pounds – given that the world halal food market is estimated at $685 billion, the report pointed out.

In addition, Muslims in Britain contribute to the growth of the $1.3 trillion “non-interest based Islamic finance sector”, making London as one of the major centres for global Islamic finance services outside the Muslim world.

“The sophistication and experience of the UK professional service industry has meant that it has long since been a partner in the Islamic finance movement. In particular, English law is the governing law of choice for many cross-border Islamic finance transactions. The success of the Islamic finance sector in the UK is in no small part attributed to the concerted partnership of Government for the past thirty years”, the report said.

Supplementing this are Britain’s world-class law firms and accountancy practices which have thriving divisions in Islamic Finance, and Britain’s universities compete globally to offer exective education in the industry and Shariah-compliant products.

Britain’s Islamic finance sector services the world and also invests in the massive infrastructure projects taken up in the country, said the report.

It quoted British Prime Minister David Cameron, who acknowledges the contribution of Muslims in helping transform London’s skyline by financing in whole or part developments such as The Shard, Chelsea Barracks, Harrods and the Olympic Village.

The 9th WIEF met Oct 29-31 in Britain, in a non-Muslim country for the first time and launched the report offering a deep insight into the contribution of Muslims to the country.

The report has pegged the spending power of the British Muslims at a staggering 20.5 billion pounds per annum, adding to the country’s economic prosperity.

According to Muslim Council of Britain secretary general Farooq Murad, it is the country’s largest Muslim umbrella body with over 500 affiliated national, regional and local organisations, mosques, charities and schools.