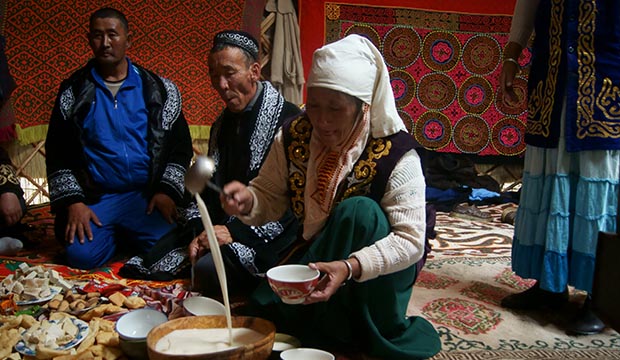 This is the second of a three-part article, based upon the writer’s recent visit to Kazakhstan. This article highlights the Kazakh halal and traditional foods, as well as traditional music.

ASTANA (Kazakhstan), Jan 15 (Bernama) — With its idiosyncratic buildings and freezing temperatures, Astana may come across as a city out of a sci-fi movie, but later proves its humanity like any other living, throbbing urban centre where people love their religion, their food and their music.

At a restaurant table in Astana, all three can come together as essential components of a body-nourishing, soul-enriching platter.

But just ten years back, Kazakhstan, the largest economy in Central Asia, despite being predominantly Muslim, was a country where finding a halal diner was a really challenging prospect for locals or tourists.

Today, with an increasing awareness, better dissemination of taste, and possibly more distance from the legacy of the collapsed Soviet system, Kazakhstan’s culinary platter is increasingly turning more halal, and also more diverse.

So, when you are tired of gawking at the outlandish buildings in Astana, you can saunter into a cosy restaurant and ask for a halal horse meat dish, dip your five fingers in a large platter of Kazakhi’s flagship cuisine, ‘Beshbarmak,’ or order another helping of Japanese sushi that comes marked with a halal logo, much like Malaysia’s Department of Islamic Development (JAKIM) branding.

Savour it all while enjoying the wafting melodies of a Kazakh folk song being played to the tune of a dombra, the traditional local musical instrument, and only then your trip is complete.

In the modern melting pot culture of Kazakhstan, especially in its show piece capital city of Astana, the halal dining scene has become more varied and is expanding exponentially.

Fret not, since Muslims coming to Kazakhstan, especially those remaining here for a longer stay, can obtain information about the availability of halal food from the Kazakhstan Halal Industry Association (AHIK).

Its chairman, Marat Sarsenbayev, said in the last ten years, the consumption of halal food has kept pace with the increase in the Muslim population, while there is also an increasing demand for halal food among non-Muslims.

In its march towards providing a halal twist to the national food platter, Kazakhstan not only took a leaf out of Malaysia’s experience, but actually sought its expertise and help.

Marat said, through the AHIK, the country has adopted Malaysia’s high halal standards and the idea of using the halal logo, such as the one issued by JAKIM, as its guideline.

For Serzhan Tazhikov, 38, who runs three halal restaurants in Kazakhstan – two in Astana and one in Karaganda city – it all started in 2006 when he became frustrated while hunting for a halal dining place in his country.

He owns a Japanese restaurant, ‘Gedza’, in Astana where sushi is a speciality dish, and also an Arabic fast food chain, ‘ALBAiK’, which is famous for its delicious, spicy fried chicken.

“At that time, there were no halal eateries in Karaganda. You wouldn’t have found any halal restaurant, cafe or even a fast food chain. Eventually, my brother asked me to open a halal restaurant.

“So, I ended up transforming my double storey cottage into a restaurant in Karaganda, with help from someone I knew from Dubai who was knowledgeable about halal standards,” he said.

He said he actually travelled to Malaysia to observe how halal restaurants and cafes are run in order to learn how he could implement such measures at his restaurant.

But it wasn’t easy to trudge the road less travelled. Serzan said when he expressed his desire to open a halal Japanese restaurant, his family and relatives said it would be tough to attract customers, particularly as he won’t be able to serve Sake, the alcoholic beverage of Japanese origin made from fermented rice.

“The halal industry in Kazakhstan is expanding rapidly and is booming. I believed that a halal restaurant will be very popular because it is pure, clean and healthy. As a true Muslim, I can’t imagine doing anything else,” he said.

Culinary tastes do differ, but when a horse unexpectedly lands on your table, please resist the urge to bolt. The idea of savouring, even tasting horse meat, may seem somewhat awkward or even freakish to some people, but here in Kazakhstan, horse meat is very popular and widely favoured.

Horse meat is also the basis for many dishes in the country, especially during the extremely cold winter. This meat is believed to help keep human bodies warm against inclement cold.

Horse meat is also said to be high in iron and omega-3 fatty acids and low in cholesterol. It can be cooked in various forms as stew, grilled or steak.

This writer had an opportunity to savour the Kazakh’s flagship cuisine, ‘Beshbarmak’, a noodle dish that looks like lasagne sheets served with boiled meats on top, usually made from horse meat.

The national dish that also features potatoes and is garnished with various herbs, such as parsley, coriander and onions, is served in a generous, large round platter.

Well, at least for this writer, the taste was acceptable, though a wee bit bland, sort of a blend between venison and beef or mutton, but a little sweet and tougher.

Every dish is followed by a round of black tea or Chinese tea, but you may be offered a bowl, instead of a cup. That’s the Kazakhi way of enjoying tea.

Marat’s daughter, Alfiya Sarsenbaeva, 20, said Kazakhs are fond of horse meat, and usually the horse meat delicacies are served as a special feast or to regale guests.

“Chicken, beef and fish are for daily intake, while horse meat dishes are famous for special events and as a treat. We also love camel and turkey meat,” she said.

Having satiated our taste buds and hunger, it was time for some food for the soul – comforting melodious music that can heal the body and the mind.

Soothing and enchanting rhythms coming from ‘dombra’, a pear-shaped long necked Kazakh folk musical instrument, is exactly what any food and music aficionado would have recommended after all those gastronomic experiments.

Made from fine wood, the dombra is played without a plectrum, strummed quite rapidly with fingers in the manner of a guitar. It has 19 gut frets and its golden brown finish highlights its unique identity.

With a skillful dombra instructor, Kamilla Eskarayeva, 25, plucking the two-stringed traditional instrument, the visiting journalists felt lulled by the gently undulating melody, even as they watched in amazement, trying to follow her agile fingers flying over the dombra.

Playing the instrument since the age of five, Kamilla, who now teaches school students to play dombra, also runs free classes for those interested in learning the musical instrument. Her only wish is that the ancient Kazakhi tradition survives.

“Kazakh people respect their instrument, and usually every Kazakh family has at least one dombra at home. In a Kazakhi family, at least one member can play it,” she said.

Next time you are here, try listening to it at least once. Just like the first gawking look at Astana’s buildings, or the first savouring of a halal horse meat ‘Beshbarmak’, you could be hooked by an arresting melody. Strum along, for after all, it’s Astana.