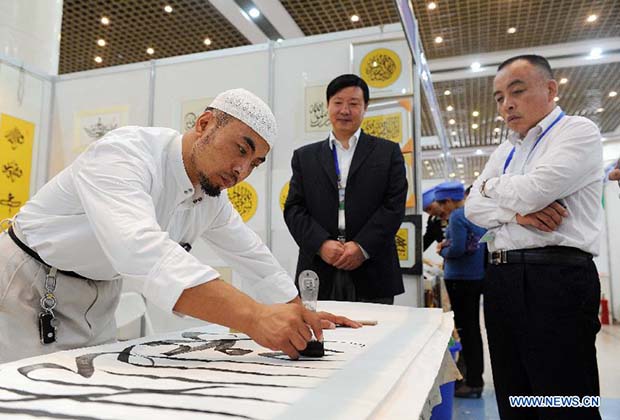 Estimated at around 1 to 2 percent of the population, Muslims are very much in the minority in China and concentrated in regions including Ningxia Hui autonomous region, Gansu province, Qinghai province and Xinjiang.

Uygur autonomous region. Yet this small percentage still translates into a population of more than 20 million people, representing a sizable market for local and foreign enterprises in halal food and other products.

Southeast Asian companies have been making forays into China while, at the same time, indigenouslocal businesses that have long provided for the dietary needs of their fellow believers are looking to expand beyond the country’s borders.

China’s share of total global halal food exports averages about $100 million per year. This is considered to be a meager figure and has the potential to grow significantly. While there are big local companies that have successfully penetrated the overseas markets, many smaller ones are struggling to be visible.

Both the Chinese government and business sectors appear to be making all the right moves in an effort to win over the Muslim world, according to Muhammad Mohsin Butt, assistant professor of marketing at Nottingham University Business School.

He explains that China is already involved in some good practices to project the country as a serious halal provider, such as organizing international conferences and events, establishing halal manufacturing hubs and industrial zones and forming joint ventures or collaborations with Muslim-majority countries.

Both are events to showcase China’s halal products to the world, promote smaller enterprises and provide sourcing and selling opportunities.

Ningxia, the government’s designated hub for halal food production, even boasts its own halal food industrial park. The regional government has a logistics center in Dubai to help local companies establish business relations with international partners.

The main advantage that the Chinese have is their ability to scale, according to Fe Jazzareen, CEO of Persis, a Malaysia-based company that provides services and advice to the halal industry.

“They know how to do volume and they know how to do it at a controlled cost,” she says. “There is certainly a lot of potential for the Chinese, not just in food, but also in the services sector in areas such as research, testing and analysis and in emerging sectors such as pharmaceuticals, ingredients and chemicals.”

Yet the Asian economic powerhouse is still dogged by negative perceptions.

“The country’s image as it stands is not going to help them in terms of credibility in this market,” says Butt from Nottingham University Business School.

Being a pork-eating country with a sketchy record in food safety is inevitably going to work against China－fairly or otherwise.

“There have been so many food-related scandals such as tainted milk, counterfeit eggs and medicines. Who is to say that the halal logo is genuine?” asks Farah Ali, a teacher in Malaysia’s capital Kuala Lumpur.

This prejudice will be difficult to conquer, especially when even Chinese Muslims still have their doubts. Early last year, several companies in Xinjiang were found to have passed off domestically produced food products as imports from Malaysia.

The reason for the deceit? The Uyghur people allegedly prefer goods that originate from Muslim-majority places over locally certified products.

Interestingly, just a few years earlier locals had been full of praise for the Xinjiang dairy industry, which had escaped China’s tainted milk scandal unscathed thanks to its halal practices.

Butt also questions the competitiveness of food products made and certified in China. If the nation is serious about its halal aspirations, it must take a long-term approach and make substantialinvestments.

“It is more about marketing and less about religion,” says Butt. Until China is able to build a favorable image, much like what non-Muslim countries such as Australia, Brazil and New Zealand have done, efforts to move the halal industry forward will be affected.

“This is fundamentally an exercise in changing perception. Either the government or businesses will have to invest in a concerted media campaign to build credibility and trust.”

History, Butt says, is on the side of the Chinese. China has a historical connection with the Muslim world that dates back to the time of the prophet Muhammad through trade and migration.

This, coupled with the rich history of Muslims in the development of Chinese civilization, could be portrayed as positive symbols in connecting with today’s Muslims.

But first there are practical issues to deal with. For starters, China has yet to develop a standardized accreditation process. Currently, local ethnic affairs commissions handle certification in accordance with provincial and regional regulations. So each region has its own laws and logos, which can be confusing for customers.

It also causes problems when it comes to acceptance beyond China’s borders, as Radil Abla, a member of the Chinese People’s Political Consultative Conference, says.

“Although China has great potential in food exporting, without a national standard those exports will never catch up with the Asian leaders, such as Malaysia, which has a world-recognized standard for halal food.”

Before issues with accreditation and logos can be resolved, however, a national law governing the halal food industry would first have to be codified, a matter that has been talked about for some years.

As of October 2012, the Standing Committee of the National People’s Congress, China’s top legislature, has committed to “urge the State Council to enact regulations on halal food in a timelyfashion” but offered no definite timetable for implementation.

“They need to empower a central body to oversee the development of the halal industry and address all these issues,” says Butt.

Opinion: China aims to change perceptions of halal
By Qindexing, China Daily Estimated at around 1 to 2 percent of the population, Muslims are very much in the minority in China and concentrated in regions including Ningxia Hui autonomous region, Gansu province, Qinghai province and Xinjiang. Uygur autonomous region. Yet this small percentage still translates into a population of more than 20 million people, representing a sizable market for local and foreign enterprises in halal food and other products. Southeast Asian companies have been making forays into China while, at the same time, indigenouslocal businesses that have long provided for the dietary needs of their fellow believers are looking to expand&hellip;