Total size of food consumption in Muslim world stands at $640b 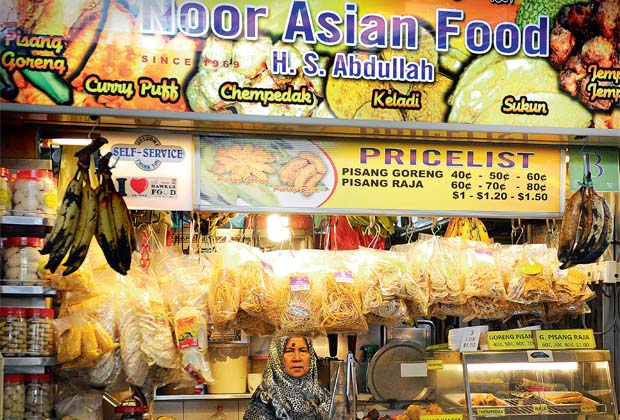 A woman sells halal food at a market in Singapore. Muslims do not control the halal agro-food supply chain, as large non-Muslim owned multinational food companies, from upstream to mid-stream to downstream, are product providers to consumers. — Bloomberg

The 57 Muslim majority countries of the OIC have a population of nearly 1.8 billion people and growing, and Islam is the fastest growing religion in many of the non-Muslim countries.

As per capita incomes rises in the emerging markets, includes 57 Muslim countries, a financial foundation for a middle-class and the consumption pattern levels correspondingly rise as consumerism is led by easier access to credit. One of the direct impacts is on increased food consumption, be it consuming more meats at home or eating out in restaurants, from fast food to five stars.

That is a lot of mouths to feed!

Muslims are obliged to consume foods that are within the halal (permissible) guidelines as defined and guided in the Koran (holy book) and sayings and traditions (hadiths) of the beloved Prophet Muhammad (PBUM). The total size of food consumption in the Muslim world is conservatively estimated at $640 billion per annum, which includes Muslims residing in non-Muslim countries.

But, today, Muslims do not control the halal agro-food supply chain, as large non-Muslim owned multinational food companies, from upstream to mid-stream to downstream, are product providers to consumers. Yes, these companies abide by certifications of accreditation bodies in jurisdictions where their products are sold, but is that enough for comfort or confidence? The challenge comes down to integrity risks, flushed out in 2013 in places like UK and China, and reliance on traceability to address leakage is not an optimal answer. For example, if a DNA of pork is found in, say, halal lamb burger, it makes the consumption prohibited. There is no purification/cleansing in the halal food area, unlike Islamic finance on, say, compliant investing.

We need to start the process of owning the halal-agro-food supply chain, and start process by looking at acquiring privately held SME halal agro-food companies. One of the issues is access to reliable data!

A query, Would Islamic finance customers feel comfortable (on Shariah compliance) if an Islamic bank was not owned by Muslims? We are seeing the Islamic windows of conventional banks becoming rare, and Qatar’s recent regulation of closing Islamic windows attests to addressing (1) possible confusion of retail customers on co-mingling and (2) authorities not understanding the financial health of the Islamic widow.

The lack of food self-sufficiency in the Gulf Cooperation Council (GCC), which has the highest per capita income amongst all 57 Muslim countries, has made the ‘import policy’ of food a ‘red alert’ national security issue. For example, one of the contributing factors to the Arab Spring movement was price escalation and lack of availability of basic food staples. Thus, an enticing opportunity exists to address food security issues in the growing and expanding Muslim world via a roll-up strategy of privately held SMEs, say, by a private equity halal agro-food buyout fund with Islamic finance structures and Sukuk (convergence).

The post acquisition, integration and incubation will eventually result in the exit. One of the exit strategies includes listing the enlarged company on an OIC stock exchange to build a global halal company brand and establish halal as an asset class as part of promoting inward and intra-OIC investing.

My limited experience in the private equity halal agro-food buyout space suggests the following is right mix for traction:

*Fund manager- does he/she have experience in the food sector, especially emerging markets and can they work effectively with the operational due diligence team

*As it’s not real estate, oil/gas or healthcare play, raising money for a new asset class (agro-food) fund will be challenge, hence, one to three transactions (co-invest) before launch fund

*Ability to connect with the sellers and making the owner understand that’s its not a financial engineering play with use of excessive leverage and dividend take-out. It must come across that you will help them grow (alignment), especially into new markets as you understand not only import regulations, but also halal certification issues and have access/own a distributor.

A halal agro-food private equity fund is important asset class for investor diversification and food security, but must start out with roll up strategy of SME halal companies before looking at billion halal division of MNC food companies.

The writer is a consultant to Thomson Reuters for Islamic finance and halal Industry. Views expressed by him are his own and do not reflect the newspaper’s policy.