Home » Editorials » Featured » Opinion: Are Muslims Allowed to Eat Kosher according to Islam? 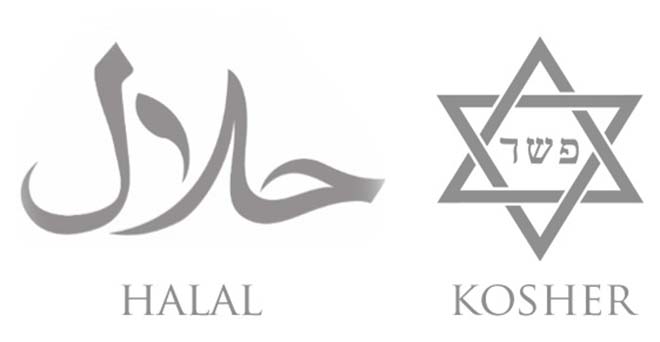 Observant Muslims and Jews eat only halal or kosher products, and face difficulties in finding food products allowed to them by their respective religions. Both Islam and Judaism teach prescribed rules related to what followers can and cannot eat. Part of these rules dictate how certain animals are slaughtered for consumption. In both Islam and Judaism, adherents believe that practicing a ritual slaughter helps them live in accordance with God’s will, and preserve their body and spirit. But in this era of secularism, with the fact that there is very less amount of halal food available in the market  so many Muslims use kosher  food products considering it to be halal on the other hand there are some Muslims who whether due to religious or political reasons think that kosher is not acceptable in Islam.

Here we should take into perspective that and as per the quranic verses 4:160 and 3:50, Jewish laws (halakhic) are much stricter than those of Sharia that’s why in most cases Muslims can consume kosher meat n products but Jews can’t eat halal products. This is shown not only in the foods that are permissible or impermissible, but also in the laws pertaining to slaughter of animals, and dietary laws governing cooking and consuming foods.

In this article we will try to clarify the non-prejudiced Islamic view point on consuming food served or made by Jews.

Prohibitions Regarding Types of Animals and Foods

Both Jewish and Sharia laws prohibit the consumption of carrion, swine, insects, rodents and blood. And any kind of food that is harmful to human body is strictly prohibited. But there are number of different food items which are allowed in Islam but prohibited in Jews law. Most of the things are mentioned by the Quran;  certain types of animal fat, for example. Jewish law specifies which types of fats and nerves are prohibited.

Both Quran and Torah contain passages discussing what halal and kosher food entails. According to the Muslim scripture, in order for meat to be considered halal, the animal must be slaughtered in the name of Allah.

“Forbidden to you (for food) are: dead meat, blood, the flesh of swine, and that on which hath been invoked the name of other that Allah; that which hath been killed by strangling, or by violent blow, or by a headlong fall, or by being gored to death; that which hath been (partly) eaten by a wild animal; unless you are able to slaughter it (in due form); that which is sacrificed on stone (altars); forbidden also is the division (of meat) by raffling with arrows; that is impiety” (5:3).

Other aspects of keeping kosher include not eating meat and dairy together, not mixing  meat and dairy utensils, as well as laws about how the animals should be killed and prepared. Utensils that have touched non-kosher food also cannot be used.

The majority of madhabs allowed the Muslim to consume these parts that are typically not considered kosher after a Jewish slaughter. The only exception to this is the Mālikī school, which deems the consumption of these parts impermissible. See table for teminology at the end of the article.

– Sharks, shellfish and crustaceans (lobster, crabs, etc.) [Note: for the Ḥanafīs these animals are also not permitted].

– Camels (because it does not have a proper ‘split hoof’). Are halal in Sharia but prohibited in halakha law.

Jewish law has very strict rules about the religious usage and washing of utensils. For example if anything non kosher cooked in a porcelain pot, according to Jewish law it can never be purified and used for kosher cooking. But if a metallic utensil is used for non-kosher cooking it must be washed with soap, and left for a period of time, then dipped in boiling water under the supervision of a experienced man. In Islamic law only thorough washing is required to clean such utensils and they can be reused for halal food.

The acceptability of gelatin and rennet are still hot topics in both religions. Scholars of both faiths believe that the gelatin in the market is made of either pork or from animals which are slaughtered without praying to God like their respective religions. Kosher gelatin is derived from kosher fish (and, in even rarer cases, from kosher slaughtered animals, or from certain cows that have died natural deaths, or from vegetable products). Muslims have to know that a kosher sign is not enough for a food to be halal, because there are some cases where halal criteria he different for kosher. Whereas most of the Muslim scholars consider kosher dairy products to be halal.

The most common substances permissible in Jewish law and haram in Islamic law are the kosher beer and wine which are allowed in Jewish law.

Believers of Islam call the ritual slaughter of animals for consumption Dhabiha (alos pronounced Zabiha). This procedure requires a person to invoke the name of Allah out loud before slaughtering the animal, since Muslims believe that only Allah has the right to grant permission to kill another creature. He then uses a sharpened knife to quickly cut the veins and arteries in an animal’s neck, minimizing contact with the nervous system and spinal cord. This process minimizes the amount of pain an animal feels and leaves the animal to swiftly bleed out completely in a few seconds.

Shecita is the Jewish slaughter procedure performed by an experienced professional called a shochet. Like dhabiha, this process entails a person using a sharpened knife to quickly sever the veins and arteries in an animal’s neck, leaving the animal to bleed out. It’s particularly important that all blood leave the animal’s body before consumption, since Jewish law forbids adherents from consuming blood in any form.

Similarities in Slaughtering an Animal

Both Shecita and Dhabiha attempt to minimize pain felt by the animal. Similarly, these religion 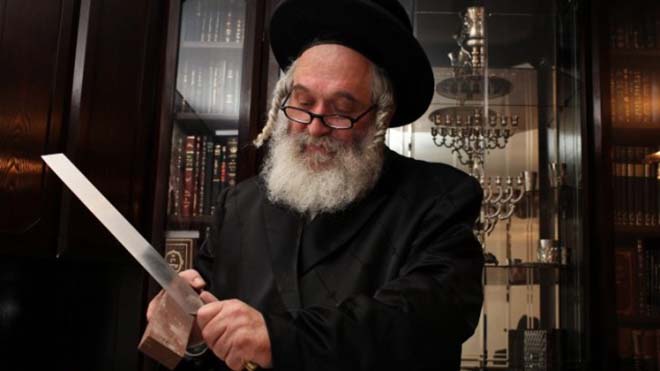 s teach that completely draining the blood from the animal makes the meat safer for human consumption, since blood causes the meat to rot more quickly. Both Jews and Muslims believe that consuming meat butchered in any way other than their own respective methods is forbidden.

Here again we have to revive that the halakha law is stricter to implement than Islamic law.

As we said earlier that Jewish law is stringent  than the Sharia’s law so the differences would be acceptable to Muslims but not to the observant Jews.

Its clear by the points that kosher meat is halal for Muslims but Jews cant eat halal meat. Because Jews don’t consider halal meat to be kosher.

There is one major difference between the Islamic and Jewish law which is the issue of tasmiya.

Its obligatory to mention Allah’s name at the time of slaughter.

From the above  the author comes to the conclusion that

– While the Qur’an allows us to offer halal meat to Jews and Christians but observant Jews will not eat halal because its slaughtered by a non-Jew (gentile), and they don’t consider it to be kosher.

– All kosher foods are acceptable as long as

– It is the opinion of the author’s that since the halakhic blessing is done over a specific group of animals and the slaughter is continuous, this blessing can suffice to fulfill the requirements of the tasmiya for that group of animals, and Allāh knows best. (From an Islamic standpoint, the shochet who does not mention the blessings will be fī ḥukm al-nāsī (i.e., the one who accidentally forgets), and the majority of scholars would deem such a slaughter as permissible, in contrast to the one who intentionally does not mention Allāh’s name.)

– And lastly, it is important that stronger ties be developed between observant Muslims and Jews so that we benefit from each other’s experiences, unite against Islamophobic and anti-Semitic efforts to ban ritual animal slaughter, and perhaps also manage to influence some kosher plants to say a tasmiya for every animal. (As most modern Rabbis allow the shochet to utter the phrase ‘bismillāh Allahu akbar‘ in Arabic before each slaughter, since that does not interfere with the rules of halakha. This practice should be encouraged and Muslims should inform local Jewish slaughterhouses that they would become potential customers if the shochetcould do this.)