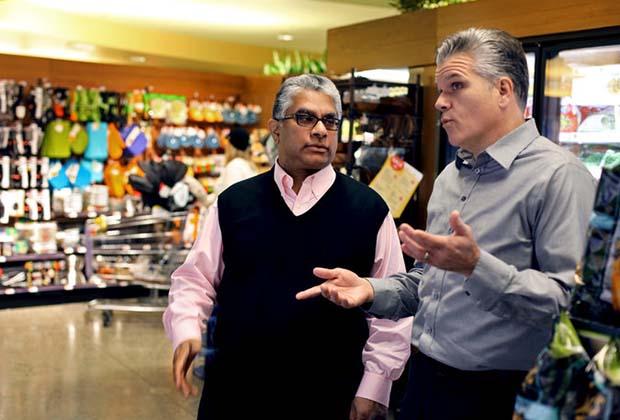 Adnan A. Durrani, left, and Jack Acree, founders of the Saffron Road line of halal frozen entrees, in a Whole Foods in 2010. Credit Craig Ruttle/Associated Press

During the early months of 2010, Adnan A. Durrani found himself frequently thinking of kosher hot dogs. To be more precise, he was thinking of an ad campaign for them created decades earlier by the Hebrew National company. Its well-known slogan went, “We answer to a higher authority.”

Let it be said that Mr. Durrani was, in many ways, an unlikely recipient for such a revelation. An observant Muslim born to Pakistani parents, a Wall Street refugee turned natural-foods entrepreneur, he was then trying to create a line of frozen-food entrees adhering to the Muslim religious standard of halal for the American market.

And Mr. Durrani was doing so in an especially forbidding political climate, with a demagogic battle raging against a proposed Muslim community center in Lower Manhattan depicted as the “ground zero mosque,” and judicial and criminal attacks against a mosque being constructed in Murfreesboro, Tenn. “Perfect timing,” he recalled dryly.

Yet the Hebrew National mantra attested to the goal that Mr. Durrani had set for his nascent company, Saffron Road: to hit both the bull’s-eye of a specific religious audience and appeal to the concentric ring of other consumers inclined to impute positive traits to any food with a sanctified aura.

By the late summer of 2010, the first Saffron Road entrees landed store shelves. This year, as the Muslim holy month of Ramadan approaches, bringing with it daytime fasts and nightly iftar meals, the company has put out more than 50 different products and built annual sales on a pace to reach $35 million.

As significant, thanks to a close partnership with the Whole Foods chain, Saffron Road’s products have moved beyond a core audience of observant American Muslims and into the commercial mainstream. In that respect, Saffron Road is among the first halal producers to follow what might be called the kosher model of simultaneously serving and transcending a communal constituency.

“What it takes for an ethno-religious food to cross over into the mainstream is, first of all, buy-in from the general public — a perception that this food has something of value that other food does not,” said Sue Fishkoff, author of the book “Kosher Nation.” That something, she continued, might be a sense, even if inaccurate, that the food is healthier, purer or of higher quality because it has been produced under religious supervision.

The challenge for a halal product, then, is a foundational one. Instead of entering a marketplace that has an innocuously favorable view of a religion and its clergy, such as Judaism and Christianity enjoy in America, a brand like Saffron Road runs the risk of colliding with and even provoking Islamophobia. All of which makes its commercial success more notable, and one might say more heartening.

In its very origins, Saffron Road stretched well outside Muslim parochialism. Mr. Durrani, 54, the chief executive, was raised in Washington as the son of cosmopolitans — his mother was a diplomat and his father was a World Bank official. His main collaborator in Saffron Road, Jack Acree, the executive vice president, is a deacon in a Dutch Reformed church. Their major ally at Whole Foods, Errol Schweizer, is a Bronx-born Jew who grew up in a kosher home.

From their earliest conversations in 2007, the men aspired to a product that could straddle two growing audiences. One is the American Muslim population, which has been estimated at seven million people with $170 billion in spending power by Ogilvy Noor, consultants in Islamic branding. The other are Lohas consumers, an acronym for “lifestyles of health and sustainability.”

No one needed to persuade Mr. Durrani or Mr. Acree of the boom in the natural-foods audience. They had seen major food corporations like ConAgra buy out countercultural start-ups and Whole Foods become the A. & P. of organic America. The men set out to prove to Whole Foods that there were millions of American Muslim consumers just waiting to be romanced. Ultimately, they developed data that indicated that even highly successful Whole Foods stores in places like metropolitan Washington and Austin, Tex., were failing to attract large local Muslim populations.

“It was so obvious,” Mr. Schweizer, the executive global grocery coordinator for Whole Foods, recalled of being shown those metrics. “It’s like there’s a million dollars on the floor over there and no one is picking it up.”

Whole Foods started by stocking about a half-dozen products, primarily Indian entrees. These outsold similar items. So after what he called Category Management 101, Mr. Schweizer worked with Mr. Durrani and Mr. Acree to develop a wider range of offerings, extending into Thai, Middle Eastern and Moroccan cuisines, and broths, snacks and simmer sauces.

While every Saffron Road product bears the insignia of halal certification, the company has consciously aimed to appeal to non-Muslim buyers. That effort included the name itself, which was inspired by the cellist Yo-Yo Ma’s Silk Road Ensemble, a group of international musicians devoted to multicultural interaction and tolerance. As of 2014, about two-thirds of Saffron Road’s products are gluten-free and about one-third do not use genetically modified ingredients. They are sold in such mainstream supermarket chains as Costco, Publix and Kroger.

Predictably, some anti-Muslim reaction has appeared, with a small number of bloggers assailing Whole Foods in 2011 for running a Ramadan promotion of Saffron Road products. Less predictably, however, the brouhaha wound up being a bonanza. Mr. Durrani went on CNN to defend his company and deployed a “rapid-response team” of bloggers, including a rabbi, to attack the attackers. Thanks to all the free publicity, Saffron Road’s sales shot up by 300 percent during that Ramadan.

“We say this is higher-powered,” Mr. Durrani said. “Angels come in from nowhere to help us.”

That part of the story, of course, just may not fit into an M.B.A. case study.

Muslim Entrepreneur Follows a Kosher Model to Mainstream Success
During the early months of 2010, Adnan A. Durrani found himself frequently thinking of kosher hot dogs. To be more precise, he was thinking of an ad campaign for them created decades earlier by the Hebrew National company. Its well-known slogan went, “We answer to a higher authority.” Let it be said that Mr. Durrani was, in many ways, an unlikely recipient for such a revelation. An observant Muslim&hellip;