Chickens still killed by machine; Imam refers to practice as “against Sunnah“ 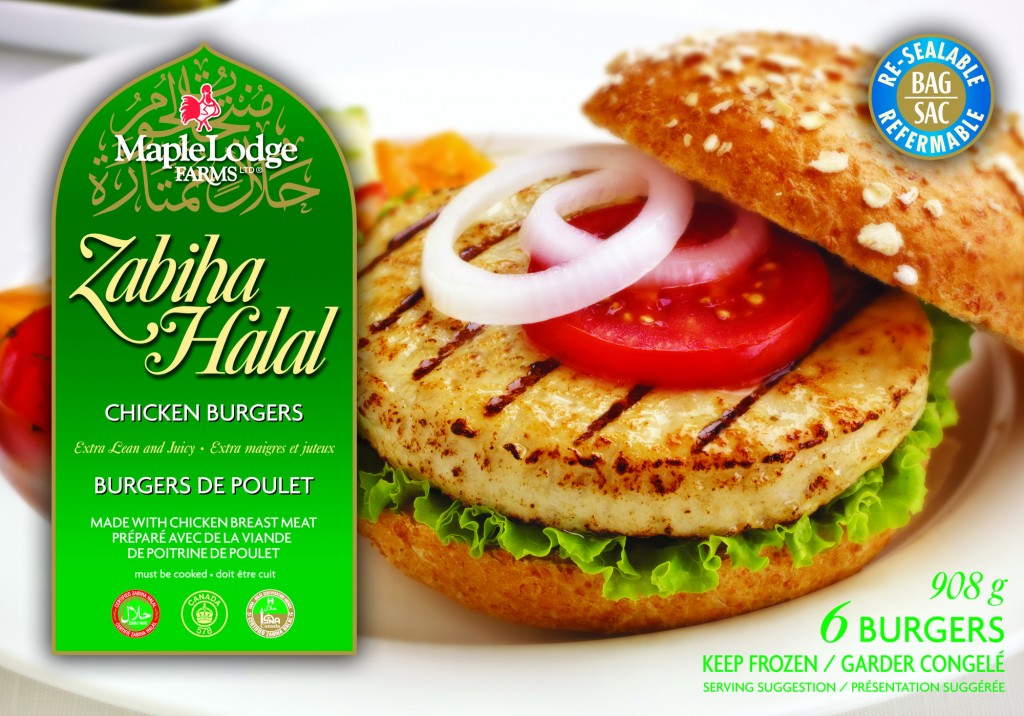 It took over a year of research and careful planning, but the new revamped line of “Halal” products from Canada’s largest chicken producer has arrived on the market.

Norval, Ontario-based Maple Lodge Farms launched its new “Zabiha Halal” line of products on June 20. The line includes many products such as wieners, bologna, loaf, polish sausages, nuggets, strips, burgers, and a variety of different fresh chicken parts and Premium ground chicken. The products come in distinctive green packaging with “Zabiha Halal” inscribed on the front along with a Maple Lodge Farms logo. The products are currently available in Ontario, and should show up in the rest of the country soon. They are also being exported to countries such as the UAE, Singapore, and Malaysia. Maple Lodge Farms’ products are also sold in over 30 other countries from Armenia to Uzbekistan.

Fred Marques, the marketing manager at Maple Lodge Farms, says the new line of products is the result of research within the Muslim community and current competition.

“Competition started to become strong, and we started to notice it. And once you start to notice the competition, it forces you to review, and that’s all we did. As a marketing manager I reviewed sales, offerings, packaging and our approach.” This review led the company to research the Halal market and find out what consumers really wanted.

“This is all because of research; consumers saying I want stuff that I would go to a restaurant and buy,” said Mr. Marques. He says that the company started the research at the end of 2001, and when the results came in, it was evident that among other things, Muslim consumers wanted a wider range of products to choose from, that were easier to find.

Mr. Marques admitted that another factor in the review was the controversy surrounding Maple Lodge’s products.

“[There were] lots of rumours going out there that we had tape recordings, that we didn’t use Muslims, that our process was wrong, [and that] it wasn’t true. I heard everything under the sun.”

All chickens at Maple Lodge Farms are slaughtered by machine. According to Mr. Marques, two Muslims stand at each of the two production lines. One pronounces a blessing with the name of Allah (tasmiyah) during the slaughter process, while the other makes sure that the machine has missed no chickens. A fifth “spare” stands-by to cover breaks, lunches, and prayer. Muslims have total control of the line, and also recite the name of Allah at the start of the line every time. Each line slaughters 140 chickens per minute or 8400 chickens per hour, which according to Mr. Marques, is the industry average. At any given time, the “blessers” bless for 2 hours straight, although they may leave for prayer.

Machine-slaughter has become a contentious issue in some circles, as many Muslims don’t consider machine-slaughter to be an acceptable method of slaughter, and instead demand that chickens be slaughtered by Muslims holding individual knives. This method is often referred to as “hand-slaughter”.

ISNA Canada is the organization that certifies Maple Lodge’s “Zabiha Halal” products as Halal. In a statement posted on the organization’s web site, ISNA Canada’s Director General, Dr. Muhammad Ashraf, states that, “Islamically there is no difference between hand or machine slaughtered chicken.” He also claims that, “there is an ignorance on the part of many Muslims and even some scholars (Ulema) that machine slaughtered poultry is not Halal.”

Many Muslim religious scholars reject these types of claims, and insist that chickens must be hand-slaughtered.

Internationally renowned scholar, jurist, former member of the Shariah appellate Bench of the Supreme Court of Pakistan, and Deputy Chairman of the Islamic Fiqh Academy (OIC) Jeddah, Mufti Taqi Usmani, witnessed the slaughter at Maple Lodge Farms during his visit to Canada in 1994.

In his book Contemporary Fatawaa, Mufti Taqi Usmani mentions his visit to Maple Lodge Farms, and suggests that, “three Muslims be employed to cut the throats of the chickens manually.” He goes on to say that, “this procedure has been practised in a number of countries where the objective of mass production was never harmed or adversely affected.”

Many proponents of machine-slaughter argue that it is virtually impossible to hand-slaughter chickens in today’s high-speed processing plants. However, opponents say that this argument doesn’t stand because there are processing plants in Canada that have adopted hand-slaughter as the method of choice for Halal production, and as noted by Mufti Taqi Usmani, the method is also practised at facilities in numerous countries.

Others say that regardless of whether machine-slaughter is allowed or not, hand-slaughter should be the method of choice because it is universally accepted by all Muslims, and as mentioned earlier, is already in practice at a number of plants in Canada and around the globe.

In an attempt to grasp the general feeling of Imams on the issue of machine-slaughter, eat-halal.com tried to contact the Imams of 23 randomly selected Mosques from Newfoundland and Labrador to British Columbia. Only 2 Imams were reached, while messages were left at 14 Mosques, but none of the calls were returned. The calls to the other Mosques were met with no pickup (3), full voice mailboxes (2), no option for leaving a message (1), and in one case, a wrong number. (masjidlist-mapleleaf to see the list of Mosques contacted)

eat-halal.com also contacted the Islamic Council of Imams-Canada, but the Council declined to comment on the issue.

Imam refers to practice as “against Sunnah”

One of the Imams eat-halal.com was able to reach was Sheikh Syed Fida Bukhari. He’s a graduate of the Islamic University of Madinah in Saudi Arabia and is the Imam of the Islamic Centre of Quebec in Montreal, one of the oldest Mosques in North America. Sheikh Bukhari says that slaughtering by machine is just not enough to satisfy the demands of the Islamic method of slaughter.

When told about the “blessers” blessing the chickens before they are slaughtered by machines, Sheikh Bukhari presented the following hypothetical scenario: Right before a chicken is slaughtered by a machine, a Muslim “blesser” pronounces the Islamic blessing (i.e. “In the Name of Allah, Allah is Great”). At the very same moment, another person near-by says a blessing for something other than Allah. Which blessing will be given preference?

Sheikh Bukhari says that there is no satisfactory answer for this scenario in the light of Islamic Law, simply because there was no human intent from either individual in the actual act of slaughter, which according to Sheikh Bukhari, is a prerequisite for rendering the meat of an animal Halal.

The only other Imam eat-halal.com was able to reach was Sheikh Younus Kathrada of Vancouver’s Dar Al-Madinah Islamic Society. He says that the method of slaughter at Maple Lodge Farms is something that needs to be witnessed, but from what he’s hearing, it doesn’t sound to him “at all as though this is something which is acceptable.”

“This sounds completely unreasonable and doesn’t appear to me that this is a possibility that each and every chicken…somebody has recitedtasmiyah over it,” said a sceptical Sheikh Kathrada, when told about the speed at which the chickens are blessed, and then subsequently slaughtered by machines. (Two “blessers” bless 140 chickens each, every minute, which amounts to one blessing every 0.43 seconds for each person). “Each and every chicken has to have the tasmiyahrecited over it, and the slaughterer has to have control of that.”

Maple Lodge Farms is aware of the fact that a segment of the Muslim population is not in favour of machine-slaughter. As such, the company doesn’t expect to target 100% of the market. According to the company’s research, 30% of Muslims are against machine-slaughter, but Mr. Marques admits that this number varies, depending on who you talk to.

He says that during the review process, he discussed the possibility of switching the plant to hand-slaughter with the CEO of the company. In the end though, it came down to cost and practicality.

“As far as l know, there is no company doing a 100% hand-slaughter of production due to the cost; another issue that arises is the percentage of birds that are decapitated during a hand-slaughter process. I personally have visited two hand-slaughter plants and have witnessed approximately 10-20% of the birds being decapitated and not removed from the line. That creates doubt in my mind about hand-slaughter, and it should also to the end consumer. In a machine-slaughter environment, we guarantee no decapitation and proper bleeding.

“We gave it a fair-shake, we looked at it, and we felt that the product would hit the retail shelves [at a price] too high due to the cost of production and that Muslims would not pay the price. We chose not to, but what we did do was, we insured that we did everything in our power to conform to the standards required by ISNA, and plus them. We’ve covered it over and above what we’re expected to do to ensure that our process is 100%.”

Lobbying against products not a concern for Maple Lodge

Shortly after the launch of Maple Lodge’s “Zabiha Halal” product line, Toronto’s Maulana Asif Qasmi reportedly appeared on a community radio show and warned listeners against consuming Maple Lodge’s “Halal” products. Other Imams and scholars are also expected to bring the issue to the forefront.

Mr. Marques says this type of lobbying is not of concern to the company, and he’s confident that his company is doing the right thing.

“Nobody has convinced me that this so-called hand-slaughter is more proper than a machine-slaughter. As a company, obviously, we wouldn’t be doing it if we thought that we were cheating the consumer.”

Whether it’s a concern for Maple Lodge or not, there seems to be no end in sight for the machine-slaughter controversy, and neither side seems to be willing to call it quits just yet.

Previous: A Canadian Halal beef exporter answers questions on how Mad Cow Disease is affecting business
Next: Feel Like Eating Something Haram