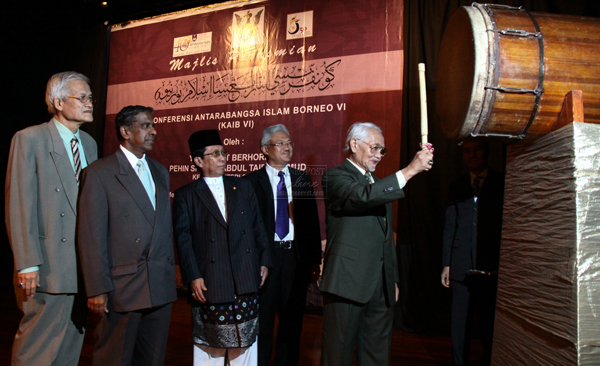 KUCHING: The administration of endowment property ought to be conducted in a professional manner to protect its value for the benefit of the Muslim community.

Pehin Sri Abdul Taib Mahmud said this could be done by setting up a special organisation, instead of the current practise of having these properties managed temporarily by various Islamic welfare bodies.

“The administration of endowment property needs to be re-examined in line with the global economic context to fully maximise its value and to avoid deterioration.

“Many have contributed their properties be used as a source to help the community, but the weakness is that most do not understand how to develop wealth in the form of frozen or idle asset against inflation,” the chief minister said at the Sixth Borneo International Islamic Conference at the Riverside Majestic Hotel here yesterday.

Taib pointed out that western economies had an aggressive approach in creating more capital.

“If Muslims do not understand how to care for the value of their endowment properties, the value would deteriorate to a stage that it will not be sufficient to help others.”

Taib said the management framework could be styled the western economic way, but by taking into account the world economy.

A more systematic endowment management would enhance the strength and potential of Muslims to use their wealth to help the community, he said.

UiTM Sarawak rector Prof Datuk Dr Jamil Hamali, in his speech, said the main focus of the sixth edition of the conference was on halal issues, Islamic education and waqaf.

The two-day conference will see the presentation of 100 working papers on various academic disciplines, such as halal, waqaf, tithe, Islamic economy, education, marketing and manuscripts with regards to Islam in Borneo.

The participants included some from Brunei, Indonesia and the Philippines. Several academicians from the peninsula and Sabah are also attending.

The first conference was held at UiTM Sarawak on February 2008. It was held in Brunei in June last year.

This year’s conference is a collaboration between the state Islamic Department and UiTM Sarawak’s Borneo Islamic Research and Development Centre.