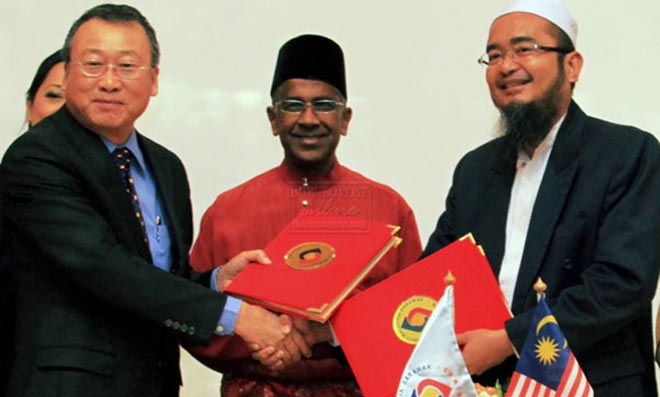 INKED: Daud (centre) witnessing the exchange of MoU between Peter (left) and Nasiruddin.

KUCHING: Food operators and entrepreneurs who fail to display proper halal certificate and logo risk being fined up to RM1 million or six-month jail, or both, effective Jan 1, 2014.

He added that the government would only recognise Halal certification issued by the Malaysian Islamic Development Department (Jakim) and the state Islamic Religious Department (Jais), and no one else.

“At the moment, those found using Halal logo or Al-Quran verses that are not certified by Jakim or Jais are ordered to remove them immediately.

“However, we took action under the Act against those who misused Halal logos, like using ingredients that are against the Halal requirements for food preparations,” he told reporters after officiating at the ‘Islamic Halal Food: Harmonising Society through Business Strategy’ at Hilton Kuching yesterday.

A group of academic and researchers from Unimas’ Faculty of Economics and Business, funded by The Toyota Foundation Research Grant Programme, organised the symposium in conjunction with the university’s 5th Asia-Pacific Marketing and Management Conference.

Daud said some food business operators and entrepreneurs did not bother to apply for Halal certification from Jakim or Jais as they wanted to avoid the application processes involved.

He said some of them even used Al-Quran verses to claim their food were Halal.

“Halal does not mean only the ingredients used, but also the cleanliness. Although they claimed they were doing Halal business, some may not be Halal. Displaying Halal logo issued by other agencies, or using Al-Quran verses, is misleading to the public.

In his speech, Daud told entrepreneurs that opportunities were aplenty in the Halal industry, and that it is a global market.

In addition, Halal products were not limited to Muslims alone for it had gained widespread acceptance among non-Muslims, he said.

Citing statistics, he said the global market for Halal products and services totalled RM1.7 trillion annually, and is expected to increase by 20 per cent by 2015.

“The Halal industry today is no longer focussed solely on food products. It is also in the service sector such as logistics, packaging, branding and marketing, as well as pharmaceutical products, toiletries, and cosmetics, finance, entertainment, investment and tourism.”

One of the highlights of the function was the signing of a memorandum of understanding (MOU) between Standard Chartered Saadiq Bank (SCSB) and Unimas for research activities and development of students’ soft skills.