Posted by: admin in Miscellaneous October 31, 2013 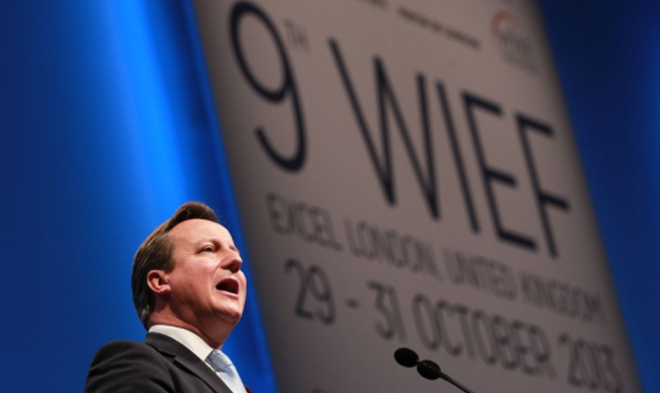 London is not content with its status as the leading capital of Islamic finance in the West and wants to compete with powerhouses in the Muslim world, British Prime Minister David Cameron declared at the World Islamic Economic Forum (WIEF) Tuesday in London, where he announced the launch of a new British Islamic Market Index and the first ever Islamic bond, or sukuk, issued by a non-Muslim country.

Calling London “the biggest center for Islamic finance outside the Islamic world,” Cameron said Tuesday that the U.K.’s ambition is to boost its reputation among Islamic investors with these forays into Islamic finance, unprecedented for a non-Muslim country like Britain.

“I want London to stand alongside Dubai and Kuala Lumpur as one of the great capitals of Islamic finance anywhere in the world,” he told an audience of international political and business leaders — including King Abdullah of Jordan, Afghan President Hamid Karzai and Pakistani Prime Minister Nawaz Sharif — gathered in London for the first ever WIEF summit held outside the Muslim world.

Though still a fraction of the global investment market, Islamic investments, which mandate stringent rules in accordance with Islamic law, are projected to constitute $2 trillion by 2014, a 150 percent increase from their 2006 value, according to consultancy Ernst & Young.

Malaysia’s capital, Kuala Lumpur, has long been considered the stalwart of Islamic finance but London counts among a rising number of cities vying to overtake it.

London is the European headquarters for several major Middle East banks and a base of operations for the continent’s Middle Eastern investors, whose assets include London’s iconic Harrod’s department store and the Manchester City soccer team. Islamic investment has financed London’s Shard skyscraper — the tallest building in the European Union — and the 2012 Olympic Village.

The British government has encouraged a diverse range of capital, especially from China and the Middle East, to diversify Britain’s investment landscape. Cameron has said that Islamic finance is expanding at a 50 percent faster rate than conventional banking, and analysts say these latest steps are designed to spur Islamic finance even further.

Jamie Durham, a partner in International Capital Markets at the law firm Allen and Overy in London, said the steps Cameron announced on Tuesday were a long time in the making.

“Britain has been looking to do this for some time now to showcase its Islamic finance industry,” Durham told Al Jazeera. “I would see these moves as a symbolic way of highlighting the quantitative steps the U.K. has taken to support Islamic finance in the U.K. more generally.”

The burgeoning field of Islamic finance has largely been fueled by Gulf investors who hope to tap into oil revenue, much of which is controlled by pious Muslims. Growing demand across the globe for retail Islamic banking services has similarly propelled Islamic investment.

In keeping with Islamic law, or Sharia, Islamic finance forbids charging interest and requires that deals be based on tangible assets. Gambling is prohibited by Islam, and so dealing in futures, which Islamic scholars say is akin to speculation, is not permitted.

Unlike conventional bonds, sukuk are described as investments rather than loans, with the initial payment made from an Islamic investor in the form of a tangible asset such as land. The lender of a sukuk earns money as profit from rent, in the case of real estate, rather than traditional interest.

Britain’s $200 million sukuk is one-fifth the size first announced five years ago but is nonetheless expected to boost London’s reputation as a center of Islamic finance — if not draw new investors into the market. Though Britain has established itself as a minor sukuk marketplace, bonds have rarely been issued from local firms — and never from the government.

“For years people have been talking about creating an Islamic bond, or sukuk, outside the Islamic world. But it’s never quite happened,” Cameron said on Tuesday. “Changing that is a question of pragmatism and political will. And here in Britain we’ve got both.”

The investment-grade sukuk has been welcomed by local lenders who could use it as a liquidity instrument, said Richard Williams, finance director at Bank of London and the Middle East, the U.K.’s largest standalone Islamic bank.

“This challenge will now be resolved and is one of the final measures in creating a truly level playing field for the U.K. Islamic banks,” Williams told Reuters on Tuesday.

Cameron also announced at the Forum that the London Stock Exchange will launch an Islamic index that filters companies by their adherence to Islamic principles, much in the same way that social responsibility indices classify companies to guide potential investors.

The prime minister cited mutual benefits for Islamic investors and Britain in launching these two initiatives, framing them as consistent with Britain’s historical commitment to free trade.

“Investing in London is good for you, and opening London up to your investment is good for us,” he told the Forum.