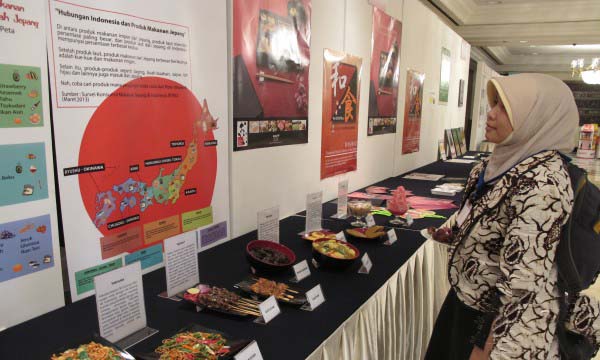 A visitor reads an information poster about Japanese food at the “Japanese Food Exhibition” held as a side event during “Symposium on Human Resource Development in Food-Related Area through Partnership with ASEAN Universities” held by Japanese Ministry of Agriculture, Forestry and Fisheries (MAFF) in Jakarta on Tuesday, January 21. (Antara/Azi Fitriyanti)

Jakarta (Antara News) – Japanese companies are more active in promoting their native foods in the Indonesian market due to increasing interest in Japanese foods and the desire by the Indonesian public for high quality foods.

In Indonesia, the number of Japanese restaurants increased 56 percent, compared to 1993. Japanese food, sushi, sashimi, tempura, to name a few, have been famous for many years, and now Japan is ready to develop its market.

“We want to go further. We want Indonesian people are not familiar with Japanese ready meal only, but also its ingredients,” said Japanese Restaurant Organization (JRO) Board of Director Michikazu Aoi, during a Japanese food symposium and exhibition in Jakarta.

The JRO has selected prospective areas where Japanese food is becoming increasingly popular and conducted research concerning the current state of Japanese restaurants, how Japanese foods and ingredients are incorporated, the level of hygiene, and more.

Indonesia was selected as one of the prospective areas, among other countries such as Singapore, Hong Kong, Taiwan, China and Thailand. In the ASEAN region, Indonesia is the second largest market for Japanese food, after Thailand.

The President Director of Ajinomoto in Indonesia, a seasonings producer from Japan, Taro Komura, said the challenges to sell their products was in learning to understand the Indonesian way of thinking about Japanese food.

One of these ways of thinking concerns “halal” certification, which certifies that a food product is made free from alcohol, pork and its subsidiaries, which Muslims cannot eat.

“Now, almost 90 percent of Indonesian people demand halal food, even if they are not Muslims,” said Komura.

According to the Indonesian Ulemas Council (MUI), the agency that authorizes halal certification, consumers accept halal labels on a product as a guarantee of safety, health and hygiene.

Komura noted the Ajinomoto brand, since it has been sold in Indonesia for 40 years, has focused on halal certification as the companys main concern in developing a new product in Indonesia.

“Our product development indicates a market interest for Japanese cuisine. Ten years ago, nobody would have thought that chicken teriyaki would be popular in Indonesia as a delicious food, yet simple to cook,” said Komura.

“We have submitted the application, the process is in progress, and we are still waiting for it,” said a spokesperson for Kwepie during the Japanese Ministry of Agriculture, Forestry and Fisheries (MAFF) food exhibition in Jakarta on January 21, 2014, who asked not to be identified.

Kwepie has built a factory in Malaysia, the first in an ASEAN country, and aims to build another one in Indonesia next year. Therefore, Kwepies spokesperson said that they have started preparing all Indonesian-related marketing tools, including halal certification and product packaging that is suitable for the culture of Indonesia.

“The Kwepie mayonnaise that has been sold in Indonesia, is a product of Malaysia, and though it has a Malaysian halal certificate, some retailers reject our products because we do not have MUIs halal certificate,” she said.

Kwepies global packaging has a naked baby logo, and will have to be modified to show only a smiley face of the Kwepies baby in Indonesia.

Regarding price, a manager of Hoka-hoka Bento, a Japanese restaurant in Indonesia, Bangkit, said that the company must sell their product at a reasonable price for consumers.

What Hoka-hoka Bento offered is to provide added-values to their menu by offering side-dishes, such as salad and fry sets, including dumplings, shrimp roll, and egg-chicken rolls.

“We dont want to reduce our quality by using low rate ingredients. Sometimes, it takes price, but we give our consumer an added-value for what they have bought from our restaurant,” said Bangkit.

Also, the Hoka-hoka Bento chose local ingredients as their priority, rather than imported goods to put on the menu. Bangkit was not able to name Hoka-hoka Bento local suppliers, but he said almost 80 percent of their food use Indonesian products.

Bangkit stressed that the fry set is the most popular menu among his customers, since Indonesians are very familiar with fried foods and most of the local food they eat daily are also fry cooked.

“It makes Japanese food easier to be accepted by the local people,” he said.

In December 2013, the Japanese food, locally called “washoku”, was recognized as a worlds intangible cultural heritage by UNESCO. This made Japan promote their food culture to the world, said a spokesperson of the Japanese Ministry of Agriculture, Forestry and Fisheries (MAFF).

The spokesperson, MAFFs Deputy Director for International Affairs, Akiko Nagano, said Japan wanted to introduce its cuisine and raised food sales through a new scheme of cooperation, not only with Indonesia, but also with all ASEAN member states.

MAFF has proposed a project called “Human Resource Development in Food-related Areas through Partnership with ASEAN Universities”, under a public-private partnership and also private-private partnership scheme, with the aim of achieving technology transfer in fields such as manufacturing and distribution of food products.

This new scheme of cooperation was aimed at combining the universities specialization in teaching and academics, with the industries advance skills in agriculture and food-related technology.

The annual budget for this project was approximately US$ 600 thousands in the 2014 Japanese fiscal year, and was formed by way of a trust fund that will be handed over for the three-year program to the ASEAN Secretariat, who will be the coordinator of the human resources development in food-related areas through partnerships with ASEAN universities.

“More importantly, to be understood from this new scheme of cooperation, is that Japan wants to enhance the good and long-term partnerships and friendships with ASEAN countries,” Nagano stressed.

With such a massive Japanese promotional effort, what is the position of Indonesia and Indonesian foods, besides its large market potential?

The Bogor Institute of Agricultures Director Graduate Program of Agricultural Management and Business School, Dr. Arief Daryanto, said the partnership through universities will benefit research and education in Indonesia, as well as for students to learn from Japanese food and agriculture-related industries.

On the other hand, Arief stressed that the Indonesian middle-class, which has been growing is, indeed, a huge potential market, not only for Japan to sell its products, but also the rest of the world.

“I think it is good if other food cultures come to Indonesia, which is well-known as a rice-eating society, to make us diversify our staple foods to other crops, like corn or potatoes or soy bean,” he said.

According to the data, one Indonesian eats 112 kilograms to 120 kilograms of rice per year, whereas the ideal for healthy consumption is only 80 kilograms per year.

That is why, Arief said, Indonesia has to build a well-organized plan to meet the nations food needs, in which not all kinds of foods had to be self-supporting, but should be provided in accordance to priorities.

“The global market is behind the door, even it has entered our market already. It cannot be stopped, nobody can. Hence, we have to strengthen our food security based on priorities,” he said.

In the Indonesian case, the higher demands of high quality and healthy foods has caused high import volumes, since the domestic supply was insufficient, also due to the lack of farm fields and lack of research and technology in food-related areas to add to the food value chain, which results in products of low quality.

“With such conditions, it is undeniable that customers would prefer imported products, rather than domestic products. And at the end of the day, it would result in higher imports,” Arief said.

Thus, Arief noted that Japan, as one of the best practices country for food security, though Japan only produces 38 percent to 40 percent of its food, and fulfills the rest of its needs through imports.

“What I underlined about priorities here is, we have to provide foods based on the needs, whether for the middle-class in Jakarta who demand high quality foods, or soy beans for the Tempe makers, or expand the crop fields out of Java, for example,” Arief explained.

Despite the fact that Japanese food, as a part of the global free market, has been entering Indonesia, and the positive growth of the middle-class which is expecting higher quality foods, the Indonesian Government should take more serious action in establishing domestic food security.

“Lets learn from Japan, as we can see now, they are successfully integrating the triple helix elements of academic, business and government to meet the needs of domestic foods, as well as to export their high quality food products worldwide,” Arief said. (*)