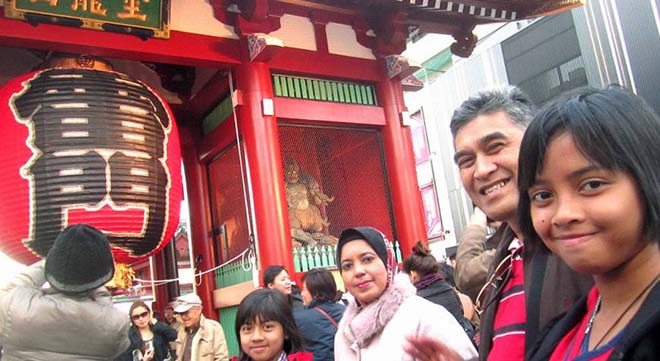 Make yourself at home: Muslims from Malaysia, Azlina Ahmad Azman (third from right) and her family visit Asakusa during their first stay in Tokyo earlier this month. | KYODO

Local-level authorities are stepping up efforts to attract Muslim tourists to their holiday spots as Japan becomes a prime destination for the growing middle-class population of Southeast Asia.

Their efforts center on promoting local businesses’ understanding of the religion’s customs, including dietary habits and methods of prayer, to create Muslim-friendly environments.

Local authorities will also disseminate information about their efforts, with the Kyoto Convention Bureau set to open a new website, Muslim Friendly Kyoto, by the end of this year.

The bureau said it is the first website of its kind by a Japanese public organization and will offer information of interest to Muslim tourists, such as locations of halal restaurants and prayer-friendly accommodations, in four languages commonly spoken by Asian Muslims.

Tips to be offered include the manners required when visiting Kyoto’s Buddhist temples without participating in any religious practices.

“Despite the high recognition of Kyoto’s name, it has not been clear to Muslim tourists what they can expect and enjoy here,” said Maiko Sakurai, an official in charge of inbound tourism at the bureau.

“Kyoto-style ‘kaiseki’ dinner courses, for example, are essentially so flexible that they could be customized to the diverse tastes of guests,” Sakurai added.

The limited understanding among people in the Japanese tourism industry led Azlina Ahmad Azman, a 49-year-old Malaysian housewife, to bring plenty of halal instant noodles on her family trip to Tokyo.

She also had to use a corner of a first-aid room at a theme park to secure enough space for daytime prayers.

“Even in the big cities like Tokyo, halal restaurants are limited and it is so difficult to find prayer spaces in public,” she sighed.

Along with the multilingual website, Kyoto’s tourism promotion office started a series of lectures in July to improve the ability of local businesses to serve Muslim guests.

Since March, at least 20 regional authorities in Japan, including nine prefectural governments, have organized similar seminars, attracting more than 1,300 people, according to data provided by the ASEAN-Japan Center, which contributes expertise on Muslim lifestyles at seminars.

The Japan Tourism Agency took the initiative, running a promotional campaign to achieve the government’s target of doubling the annual number of visitors from Southeast Asia to 1 million this year.

Relaxed visa requirements for Malaysians and Indonesians since July have been helping to boost the inflow of Muslim tourists to Japan.

Besides Kyoto, other holiday destinations have been running promotion activities, with the Hokkaido Tourism Organization in September compiling a 20-page Muslim Accommodating Guide, while Toyama Gov. Takakazu Ishii visited Indonesia in October to promote tourism for the first time.

Later this month, Fukushima Prefecture will join this tide by hosting its first seminar on Muslim manners for local businesses, in hope of supporting the local tourism industry.

“The slow recovery in the number of foreign tourists visiting the prefecture is one of the major concerns following the 2011 incident,” said Ryo Hosokawa, who is in charge of international tourism promotion at the prefectural government.

Fukushima attracted up to 100,000 foreign tourists a year, mostly from South Korea, Taiwan and China, before the March 2011 earthquake and tsunami crippled the Fukushima No. 1 nuclear power plant.

The number of foreign travelers to Fukushima plunged in 2011 due to the nuclear crisis and it remains low, with 37,000 visitors in 2012, according to the prefectural government.

“As expectations and potential are huge, it is necessary to be considerate of guests from Southeast Asia,” said Hosokawa, stressing the importance of inviting tourists from a wider range of countries for the sake of getting the local economy back up to its pre-disaster strength.