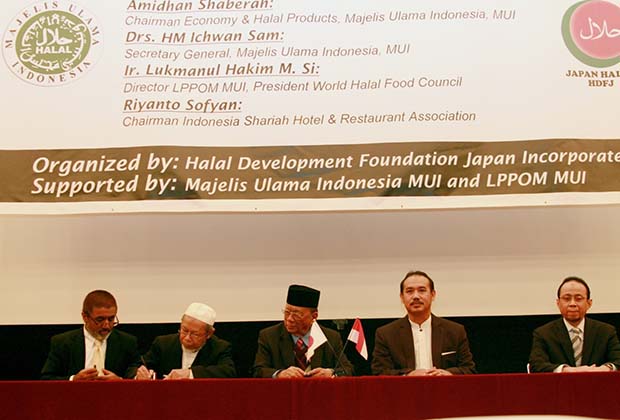 Halal Development Foundation Japan Incorporated, and the HDFJ held a Global Halal Seminar at the Japan National Press Club in Tokyo on January 22, 2014. Main speakers were from MajelisUlama Indonesia MUI, LPPOM the Halal certification management body of Indonesia and the Chairman of the Sharia Hotel and Restaurant Association of Indonesia.

At the opening ceremony, MajelisUlama Indonesia and HDFJ signed a MoU, confirming their deep cooperation and working relations. Chairman of Shariah Compliant Sofyan Hotel also signed a MoU with HDFJ to jointly work with HDFJ to promote Sharia Compliant tourism and hospitality in Japan and Indonesia. MUI and HDFJ decided to cooperate in certifying Halal Products of Japan and promoting awareness about Halal and Islamic values.

Mr. Lukmanul Hakim, the Director LPPOM MUI, explained about the importance and process of Halal Certification. “Indonesian people like Japanese foods and other products but without Halal Certification they cannot eat or drink even if the foods or beverages are delicious and healthy” Mr. Lukman stressed. Talking about growing Indonesian economy, he explained that the market is expanding with a fastest pace which is a great opportunity for the Japan.

Japan need correct and prompt information about Halal Development in the world, said a participant from the food industry. 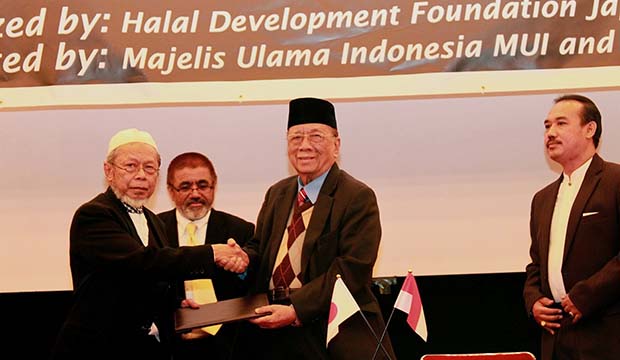 Speaking at the seminar, Chairman Sofyan Hotels Mr. Riyanto Sofyan presented an outline of Sharia Compliant Hotel. Sofyan Hotels in Indonesia are one of the best Halal Hotels, Sharia Compliant and certified Hotel chain. “Halal Products and Services are one of the next big global growth opportunities. Understanding their unique lifestyle (of Muslims) choices is the key to tap into this lucrative market”. Mr. Riyanto Sofyan said.

HDFJ is to hold several Halal Seminar and Workshops to expand awareness about Halal products, Halal Tourism and Halal Certification.

“There is a need to make Rising Sun (Hinomaru) a strong halal brand, let make Rising Sun Japan Halal”. President of HDFJ said. He was urging not to depend on foreign Muslim countries for Halal certification but make a strong Japan Halal brand. MajlisUlama Indonesia, Sofyan Hotels and HDFJ agreed on cooperating to promote Halal Industries including tourism and hospitality. In middle of February 2014, HDFJ is to announce strategy and plan for the promotion of Halal Hotels, Restaurants and tourism in Japan. “Japan promptly need a unified Halal Standard and one logo to promote Japanese products in Islamic world. Promotion of JAPAN Halal is essential to let the Islamic world know that the Japan is producing Halal foods and beverages”. Mohammad Zubair, Vice President of HDJF emphasized.