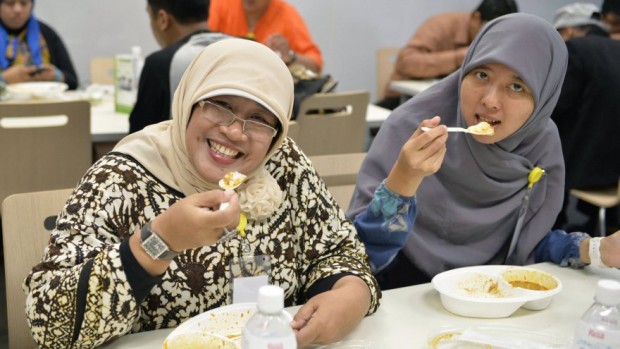 Arigato! Now can we get some halal sushi please? AP / Kyodo

For observant Muslim travelers, Japan’s Kansai International Airport has long been a food desert. Now they can slurp noodles with everyone else. In July the kitchen at The U-don, a Sanuki udon noodle shop, was halal-certified. A self-service udon noodle restaurant inside Kansai International Airport, Za U-don, obtained halal accreditation from Malaysian Halal Consultation & Training, according to its operator Kansai In-flight Catering Co.  This was no mere act of cultural kindness: From 2011 to 2012, the Renzo Piano-designed airport witnessed a 70% increase in visitors from Indonesia, the world’s fourth most-populous nation and home to its largest Muslim population. The people’s stomachs have spoken, and halal udon was only the beginning of the airport’s—and Japan’s—larger vision to embrace Southeast Asian tourists.

A decade of economic growth coupled with a more recent boom in low cost carriers have given new wings to the Muslim-majority populations of Indonesia and Malaysia. Southeast Asia generates 11% of arrivals in the Asia-Pacific region, and the region as a whole is expected to add around 380 million more passengers a year between 2012 and 2016, according to the International Air Transport Association.

Japan wants a piece of this action. The country’s tourism industry is rebounding from the 2011 Tōhoku earthquake and tsunami, and its economy could use a boost from foreign shoppers. So while only 780,000 of Japan’s 8.37 million foreign visitors in 2012 were from Southeast Asia, the Japanese government wants 2 million by 2016, according to a recent report. To that end, it has relaxed travel visa requirements and also published a guidebook on Muslim-friendly restaurants, mosques and attractions in Japan.

Japan is not alone in courting Southeast Asia’s burgeoning middle class. Thailand has touted its halal spas, while hospitals in South Korea are building prayer rooms for those in town for a nip and tuck. New Zealand is going after Islamic foodies with a culinary tourism guide for halal travelers, and anticipates that spending by Muslim tourists will increase to more than 13% of global tourism expenditure by 2020.

So far the Japanese have seen 43.1% more Indonesians in the first seven months of 2013 compared to the same period last year, and 17.5% more Malaysian travelers. This is still a fraction of what Japan gets from China, but then again there are no messy territorial disputes to depress tourism. In its quest to become “Japan’s first Muslim-friendly airport,” Kansai International plans to add prayer rooms and halal meal options while 16 restaurants will go pork- and alcohol-free. After all, nothing says “welcome to our country” like overpriced airport food.