Opinion: Islamic finance, the Gulf and London’s future as a global hub

By Mehmet Asutay, The Conversation 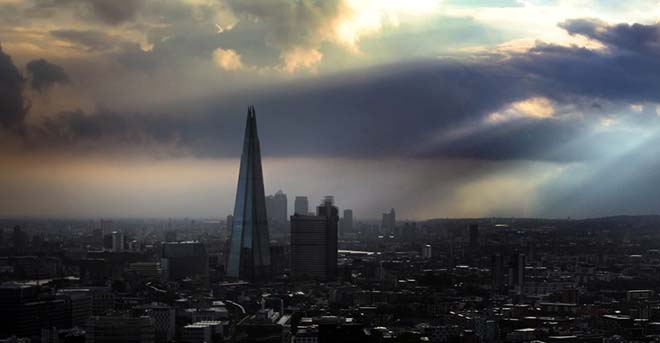 Looking East: Sunrise behind The Shard as seen from the London Eye.

It is not surprising to see both national and local government seek this investment, as London is in many ways ideally placed to benefit from a growth in this special form of finance. In the race to attract the sector, London enjoys various historic and cultural advantages over many of its rival financial centres.

Sharia-compliant banking has been handled in the UK since the early 1980s and London has long been at the centre of business and investment in the Muslim world. In the 90s, London began to provide more sophisticated and structured Islamic services, as local financial services and legal firms acquired enhanced knowledge and experience of the market.

Over the years, London has managed to maintain the industry. Last year it had about US$18.5 billion in sharia-compliant assets, the 9th most of any city in the world.

This experience in Islamic banking gives the city a degree of social capital in the field, unmatched by rival financial centres in the West.

The UK government now recognises Islamic finance as a valuable proposition, one which can bring innovation and diversity in the well-established UK market. Ultimately, it can support London as an international financial centre.

Current economic reality, both in the UK and globally, provides an important rationale for the government’s desire to attract capital from the Gulf.

With most Gulf investors aiming for sharia compliant investment or Islamic financing, moves by UK governments over the years to facilitate them are simply responses to economic conditions. After all, given Islamic finance has already been behind developments like the Shard or the Olympic Village, local and national governments would be foolish to ignore its potential. In addition, financial inclusion in terms of providing financial access to Muslim community according to their religious tenets has played a role as well.

The recent commitment by the UK government again aims to attract further capital to London, accompanied by the political will to provide a more welcoming environment by extending the Islamic finance sphere through sukuk, or Islamic bonds, for example.

There are four ways in which Islamic finance could be developed in the UK:

Engagement: The relevant authorities must engage with businesses, retail groups, Sharia scholars, regulators and the financial product providers themselves to ensure the right environment for Islamic finance to flourish in London. Coordinating all these various groups will be tough, and that is why the formation of an “Islamic finance task force” is essential, as announced earlier this year.

Investment: Existing UK-based Islamic banks and financial institutions should invest in product design, launch and distribution to be able to maintain a competitive edge.

Competitiveness: The legal, regulatory and financial environment should work in coordination to ensure London’s competitiveness in terms of providing the right environment for future Islamic finance activity in the capital.

Demonstration: This will require providing all the necessary conditions for the existence and growth of the market. The Prime Minister’s indication of a sovereign sukuk sends a symbolic signal to other competing markets indicating that London is taking this seriously.

This would all be part of a process of increasing the provision of financial services at all levels in society, something development economists call “financial deepening”, an important boost to economic growth.

While London has for some time aimed at becoming an Islamic finance centre, other financial centres including Tokyo, Hong Kong and New York, could perhaps be considered as potential competitors.

However, none of these rivals appear to have London’s political backing. This not only enables appropriate laws to be passed, but it also provides Islamic capital with confidence that it will be well received in the country.

Istanbul promises to become a serious competitor in future, with a growing Islamic finance sector based in the Muslim world’s second largest economy benefiting from close ties to both East and West.

Entirely new rivals may emerge, but Islamic finance’s risk averse attitude generally motivates it to remain in known traditional markets rather than new shores which may have higher returns, but also higher risks.

Recent commitments to develop Islamic finance in the UK represent a positive move. The UK economy will derive further benefits from attracting Islamic capital, and London’s position as a global financial centre will be strengthened.

* This is the personal opinion of the writer or publication and does not necessarily represent the views of eat-halal.com.