When Nouriel Roubini speaks, you would do well to listen carefully. 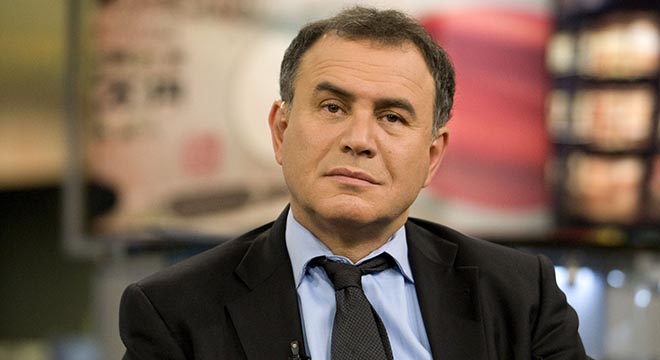 The American economist Nouriel Roubini, who was billed as “Doctor Doom” for the gloominess of his forecasts, predicted a collapse of property prices, banking disasters and economic recession in the run up to the 2008 financial crisis. Gus Ruelas / Reuters

The 55-year-old American economist was a voice in the wilderness in the run-up to the global financial crisis of 2008 and 2009, predicting a collapse of property prices, banking disasters and economic recession.

When he was introduced at the Global Islamic Economy Summit in Dubai last week, he was billed as “Doctor Doom” for the gloominess of his forecasts, but also as one of the leading economic thinkers of his generation.

So how does he see the world as it heads into 2014? The good news is that, in global terms, there is an uneven but meaningful recovery under way pretty much everywhere.

The bad news is that asset inflation and “frothiness” could create the conditions for another bust.

“Recovery has been anaemic in the West, around 2 per cent on average and slower in Japan.

“There is still deleveraging going on. The name of the game is monetary stimulus, but this is causing asset inflation, rather than goods inflation or increased employment. We are beginning to see signs of frothiness in global markets again, while equity prices are high and price [to] earnings ratios [a measurement of equity values] above historical averages,” he adds.

The characteristic Roubini “permabear” mentality is still just below the surface. “Quantitative easing leads to a risk of financial instability, and greed in financial markets can still cause bubbles and crashes,” he warns.

But when he turns to the Middle East economies, and to the growing sector of Islamic finance, his tone brightens noticeably.

“There is a need for a more resilient system, and that’s where there is potential for the Islamic system. It is less volatile and potentially more stable than conventional financial systems. The advanced economies can learn from the Islamic system in this respect,” he says.

Mr Roubini has roots in the region. Born in Istanbul to a family of Iranian émigrés, he got his early education in the region and has come back regularly for speaking engagements and field research.

He believes the Middle East has its own special characteristics, but must still be seen against the backdrop of the emerging market economies of Asia, Africa and South America.

“The prospect for emerging economies is still positive, with 5 per cent growth averages compared with 1 [to] 2 per cent over [the] past few years in the rest of the world. There are demographic dividends with young workforces, and the rise of more affluent middle classes. All this adds up to a long-term trend that is putting these countries at the centre of growth in the global economies,” he says.

The Islamic world has its own opportunities and challenges. “The Organisation of Islamic Cooperation [OIC] consists of 57 states, and they are all very different. In the Gulf, they are mostly oil-rich and the priority is to diversify, and the UAE and some other Arabian Gulf countries have been quite successful in that respect. For oil importers such as Egypt and Syria, it is more difficult, but there are other unstable elements in the region, too: Yemen, Iraq, Iran.

“Islamic countries in South East Asia have been quite successful, like Malaysia and Indonesia, and Turkey also is quite dynamic,” he adds.

The challenge lies in how to exploit what Mr Roubini calls “the democratic dividend”. Having a growing young population is a good thing, but they need education, training and jobs, and in this area some fall short, he believes.

And there is still the challenge of diversification away from oil dependence. While some countries have been partially successful, the extent of the problem lies in one statistic, Mr Roubini says. “This encapsulates the problem: excluding oil and gas revenue, the GDP of the Middle East, with 400 million people, is roughly the same as that of Belgium, with around 10 million people.”

The other good news is that he believes Islamic finance and economy can help span the diversification gap. “The halal economy is a real opportunity, but it needs to be more standardised and integrated into global markets,” he says.

Mr Roubini seems uncharacteristically optimistic with regard to Islamic finance, with some key reservations, and the prospects for Dubai to be a centre for the growing industry.

“I’m all in favour of less risk, and some elements of Islamic finance involve profit-sharing and risk-spreading, which is good. There are many things in Islamic finance that can lead to more stability. There is a lot Islamic finance can teach us,” he says.

“I do not see Islamic finance competing with conventional finance, rather it is complementary to it. The main focus will be on the Islamic world, but others will also seek to get involved, like London.

“One of the challenges of the Islamic financial systems is the issue of insolvency. Creditors have a claim over the underlying assets, which is a good thing, but bankruptcy regimes in Islamic countries are not very strong,” he says.

“Dubai at the moment has good prospects. There has been a recovery in the real estate sector. The lifestyle here is less restrictive than in other countries in the region, and there is safety and security. In the longer term, Dubai can be an important financial centre and a key economy of the region. Sometimes you make mistakes, but if you manage growth more cautiously and manage diversification properly, I’m optimistic about Dubai,” he says.

Can the UAE challenge London and Malaysia, the other major global centres for Islamic finance? “I don’t believe Middle East capital is likely to suddenly fly off to Malaysia, and London is barely starting in the Islamic finance business. It could have a role, but I see no situation where London will supplant Dubai or Kuala Lumpur,” Mr Roubini says.

“The other thought is that perhaps there are too many financial centres in the Gulf. There are at least four, which I believe is too many. In the long term, a couple of them might emerge as the leaders, and I think Dubai and Abu Dhabi could do that.”