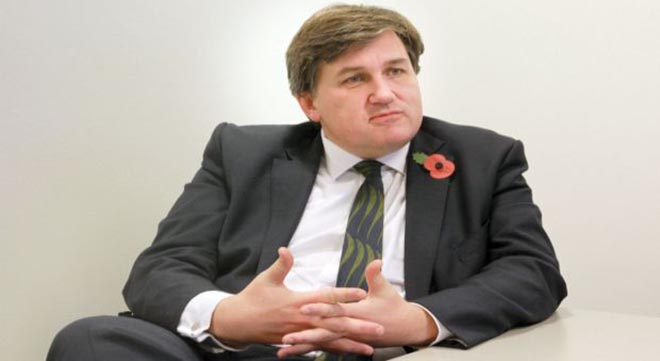 London, Asharq Al-Awsat—As the ninth World Islamic Economic Forum draws to a close in London, focus has turned to the long-term prospects and development plans for the British capital as a center for Islamic finance.

London has long been a popular destination for tourists from the Middle East. It has also gradually become an Islamic finance powerhouse—recognized this week as it became the first host of the WIEF outside the Islamic world—that is still seeking to increase its share of the Islamic market, in part because market analysts realize that Shari’a compliant interests have appeal even to non-Muslims.

On the sidelines of the forum, Asharq Al-Awsat spoke with London’s Deputy Mayor for Business and Enterprise, Kit Malthouse, about London’s strategy for its Islamic finance sector and the economic and cultural connections between London and the Middle East.

Asharq Al-Awsat: Can you tell us what sort of future Islamic finance has in London and Great Britain?

Kit Malthouse: We see huge potential in growth for Islamic finance and Shari’a-compliant finance. So obviously from a London point of view, it’s another form of ethical investment, along with all the other forms of ethical investment we have here. Given that London is a global financial centre, we think that Islamic finance should take its place alongside all the other products offered. In the end, London is a city of exchange: it’s a city of exchange of business, of money, of currency, of ideas and of investment, and for Shari’a-compliant investment. We think that London can play a big part in promoting and propagating it across the world. Of course, while Islamic finance is obviously compliant for Muslims, it doesn’t have to be just bought by Muslims; it can be bought by everybody. That’s the value that London brings. We’ve been early adopters of Islamic finance: there are 22 law firms and four or five Islamic banks in London. Our business schools and universities have courses in Shari’a-complaint finance, they’re training people for the future. We think that it’s a very strong growth story, and we want to be part of that.

Q: Do you think the conventional financial system and banking can learn anything from Islamic finance?

I think probably yes. Aside from everything else, Islamic finance, as I understand it, is another form of ethical investment and obviously it is growing in popularity, so one of the things they can learn is that ethical investment can work. Having said that, where our skill comes in as a city is in helping Islamic institutes to translate their products into a global retail environment. As I said, one of the critical things for Islamic finance is that it needs to be bought by non-Muslims, it should become a standard part of the investment portfolio that anybody holds, particularly if they’re keen to invest in what would be regarded as ethical.

Q: Some of the most important features of Islamic finance are the lack of interest and the presence of risk-sharing. Do you think Islamic finance is becoming more mainstream following the financial crisis?

I definitely think that there is an appetite for it after the crash. If you look at trends you see within our own economy, we’ve seen a move by businesses away from standard interest-bearing borrowing with variable interest on an overdraft more towards fixed-rate borrowing, so leasing, for instance, which is Shari’a complaint, and which is a product that has been in the UK for decades, is increasing in popularity because it provides certainty and risk-sharing in the way that Shari’a dictates. So yes, it will grow more and more popular.

Q: In May of this year, you visited Turkey and met with a lot of business associations there. Are there any plans to do the same in the Arab countries?

Yes, I did visit Turkey and we went because we think that Istanbul is an exciting city, it’s obviously growing strongly and, in particular, it wants to play a big part in global financial services. London has expertise in that, so we’d like to help them, not least because we see them as a great partner in London for moving into North Africa and the Middle East. The mayor [of London, Boris Johnson] also visited some of the countries in the Gulf this year. He went to Qatar and Abu Dhabi, and I think later this year he’s going to Kuwait.

Q: Regarding city twinning, is there any plan to twin London with any Arab capital, for example?

We don’t generally do twinning. As a city, we have a policy that we don’t twin, but that doesn’t mean to say we can’t have friendly relations and memorandums of understandings, and I know that when the mayor was in Doha he signed one with Doha on digital and tech stuff. We don’t do formal twinning, but we have lots of friendly relations within which we work.

Q: What kind of contacts do you have with Arab or Middle East business associations throughout the region?

We have strong contacts in the Gulf and our contacts with Turkey are now improving after our visit to Istanbul, but we have such a lot of investment from the Arab world in London. We have strong links with the Qataris, the Kuwaitis, Saudi Arabians, people from across the UAE, but less so across North Africa, but we’d like to try and improve that. London has such a strong and vibrant Arab community that those links are not just governmental, they’re also social.

Q: Since the Arab Spring more than two years ago, London has become even more attractive for Arab visitors, with some analysts even claiming that the recent London property boom is the result of wealthy Arabs relocating to the city. Would you agree with this assessment?

We have had a big inflow of capital from across the world, not just from the Gulf. I’m not sure that it was the general Arab Spring so much as a general re-evaluating of London after the Olympic Games as a place where people should come and invest. We’re a vibrant, tolerant, diverse city, and people saw that during the Games. They saw how many global communities there are here. Also, we’re politically stable, we have a great legal system which is, you know, certain and fair, and that’s attractive to people around the world. Apart from building up the political and friendship links on our foreign trips, and obviously talking to investors across the world, we’re not doing anything special for Arabs or people from the Gulf that we’re not doing for anybody else. We’re not fussy about who comes, but a sign of how warm the environment is is that the WIEF has come to London for the first time in its history. It has taken the decision to hold this very important conference outside the Muslim world, and that, we think, is a compliment.

Q: Last month, you wrote an op-ed warning Scotland and Wales not to try and compete with London in terms of tourism. Did this get a particularly negative reaction?

Yes, it did. I have to say my words were misinterpreted. What I said was that London and Scotland and Wales shouldn’t be competing with tourists, we should be working together to make sure that tourists come to all of them, so my proposal was to say to people, ‘Come to London, and you should also go to Scotland,’ so that we’d be stronger together.

Q: You’re clearly interested in maximizing London’s tourism industry. Can London learn anything from tourism in the Arab world or vice versa?

Yeah, I think there are things we can learn, obviously one of the things that I’m told that visitors appreciate in the Arab world is the very high level of service in hotels and restaurants. Although London’s service economy is strong and improving, I think we could definitely learn from that. Plus also we’re very envious of some of the really big infrastructure investments that Arab countries have made, not least in their airports. There are some big airports being built across the Arab world. While London has five airports, we have a longstanding discussion about our aviation capacity and our ability to build a new airport somewhere around London, while in the Arab world it seems to have been decided.

Q: London mayor Boris Johnson is a very popular politician, but his public persona is that of a man who is not very detail oriented. Does he closely oversee all the decision-making?

One of the great things about working for Boris is that he picks someone to do the job, and then he delegates to them. He does not micromanage. Really talented, capable people don’t like to be micromanaged, and so I think that he attracts a higher quality of advisor than he otherwise would. Having said that, he’s very clear about what he wants in terms of results, and he holds us all to account. You have to remember that London is not just a city, it’s actually a medium-sized European nation; it’s a bigger economy than Austria.

Q: Every summer, wealthy Arabs descend on certain London neighborhoods, such as Knightsbridge and Mayfair. Some newspapers focus on this, particularly the issue of the very expensive cars they are driving, and sometimes illegal parking. What’s your view?

I have to confess that the residents of Knightsbridge do find it very irritating, mainly because of the noise, because the cars are very noisy and very fast. The people come from the Gulf in the summer because it’s very hot there, and so they come to shop and have fun. But maybe it would be better if they all got electric cars—they should all get tesla cars, because they’re silent, and then they’d be even more welcome than they already are.