Indonesia: Experts in Innovation and Marketing Speak to 5,000 in Indonesia

By Jonathan A. J. Wilson

Fifty International Experts in Innovation and Marketing Speak to an Audience of 5,000 in Indonesia 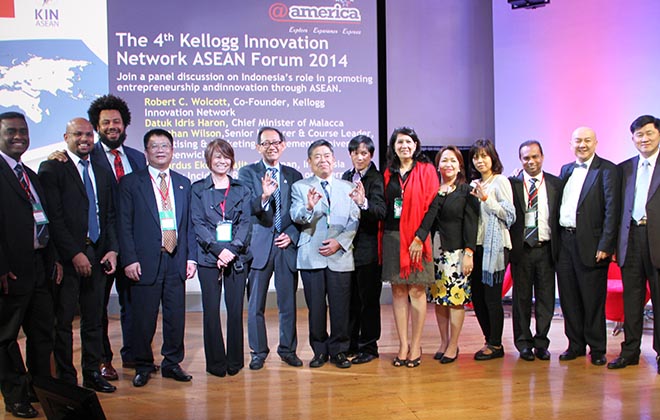 Photograph of the KIN ASEAN Forum, held in @america

Here’s a snapshot of the streets of Jakarta, on what could be any day of the week: 4 wheeled traffic, a fair few of which are covered in English Premier League football club stickers, crawling… Jams punctuated with swarms of buzzing motor scooters, weaving and snaking through every gap. Guys wearing jackets back to front to act as a wind breakers, whilst riding their scooters. Ladies in jeans, brightly coloured hijabs (Muslim headscarves) and Hello Kitty helmets, looking cooler on their scooters than even Dennis Hopper in Easy Rider. Families of four, balancing on scooter frames like circus acrobats – mum, dad, youngster and baby. Men stripped to the waist, stood at junctions like matadors, braving showers and a humid 30 degrees Celsius – as impromptu self-appointed ushers, in exchange for tips from divers… And amongst all of this – no road rage.

Anytime, anyplace and anywhere, I see Indonesians with one eye on a Samsung, Blackberry, or Apple mobile device – one phone in the hand and one in the pocket. People tweet about where the worse traffic jams are. Deloitte, MarkPlus, Neilsen, OnDevice Research, Redwing Asia, Semiocast, and Techinasia report that Jakarta is the most active Twitter city in the world, sending 15 tweets per second. The top-ten tweeting cities read as follows (in order): Jakarta, Tokyo, London, São Paulo, New York, Bandung (Indonesia), Paris, Los Angeles, Chicago, and Riyadh (Kingdom of Saudi Arabia).

Indonesia has a population of 247 million – spread across over 17,500 Indonesian islands, 70% under the age of 25, and nearly 90% of whom are Muslim. Phones and the internet are considered to be a day-to-day necessity in Indonesia, according to Eddy Tamboto, from the Boston Consulting Group, Jakarta. Indonesia has the cheapest mobile data plans in the world, with nearly two-thirds of people accessing the internet using a mobile device; the greatest number of people anywhere, pimping their phones with stickers; and the 3rd largest number of Facebook users globally. More people have mobile phones than bank accounts, and under 10% have a home internet connection.

This is the Indonesian Zeitgeist: they are young (or young at heart), connected and social. They pride themselves in occupying a dual-cool hybrid state of being ASEAN, fusing the contemporary with the traditional, whilst reaching their tentacles to the West. They are also avid rice and satay eaters, tea and coffee drinkers, and Korean popular culture (K-Pop) fans. The food, the fashion and the fact that someone seems to be singing everywhere gives me a sense of how this sleeping giant looks ready to spread its smile further across the waters.

It is for these reasons that I had to attend the annual MarkPlus December gatherings in Jakarta for a second year running. There were four events between the 10th-12th December.

I ran a masterclass on ‘Pop Culture Marketing’, which was largely inspired by my experiences in Southeast Asia over the past few years, in the Philip Kotler Theatre – named after the father of modern marketing and ally of Indonesian organisation MarkPlus Inc. My take is founded on two simple principles:

Firstly, that the best clues as to who we are, and what we think, feel, and do, can be found through investigating the tangible and intangible:

Second of all, that Marketing has become the new core skill of everyone. Consumers aren’t just being marketed to, they also take part in marketing the things that they consume and even themselves. This also extends outside of consumer marketing and into business-to-business (B2B) and personal branding settings. 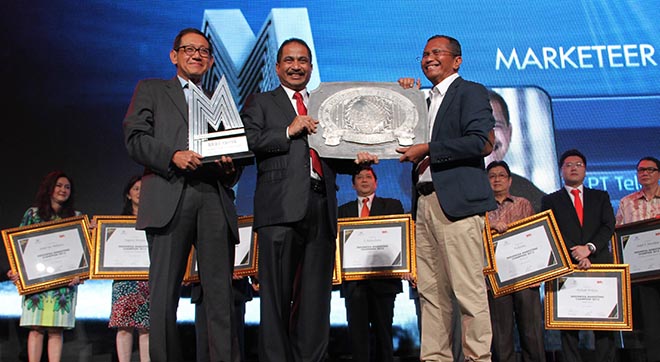 Think about the recent The Internship (Google) and Steve Jobs movies, Alex Ferguson, David Beckham, Alan Sugar, Jay-Z, The Apprentice, The X Factor, and YouTube user-generated content haulervideos. As a by-product of increased competition, globalization, and information exchanges, people are craving human social bonds and cultural relationships. But it’s not just about being seen or becoming a celebrity – it’s about the public being encouraged to celebrate their personalities; to develop more than one career path, as no job is for life or pays enough; and to monetise.

The Kellogg Innovation Network ASEAN Forum ran over two days, one of which was held at @america, located on the 3rd floor of Pacific Place Mall, Jakarta. It’s probably the most superfly funky, but high-security place I’ve given a talk at. I wasn’t allowed to sip water in the auditorium, nor was I allowed to take my laptop in, so that I could refresh my memory with the slides that I had to submit the day before. @america is an interactive cutting-edge, 21st-century cultural center where you can explore, experience and express your thoughts about the United States of America. You’ll see information on education, politics, religion, Hip hop and a whole lot more.

Photograph of the KIN ASEAN Forum, held in @america

The sessions were chaired by the co-founder of the Kellogg Innovation Network (KIN), Professor Robert C. Wolcott, from the Kellogg School of Management, Northwestern University, USA; and Professor Hooi Den Huan, from Nanyang Technological University (NTU), Singapore. Both professors were dynamic and entertaining throughout, and made so many great points. Here are some of my favourites from Professor Wolcott:

“It’s not just about establishing networks – you need to also bring together and maintain diverse networks of people, from a wide spectrum of seemingly unconnected areas of expertise”

Founded in 2003, KIN is a platform for facilitating strategy and management dialogue between corporate innovation leaders, non profits, and government, to build long-term value. At the KIN ASEAN Forum, there were more than 60 international participants who came from 15 countries.

On day one, a Memorandum of Understanding was signed between Hermawan Kartajaya, founder of MarkPlus Inc., listed in 2003 as one of the ’50 Gurus Who Have Shaped the Future of Marketing’ by the Chartered Institute of Marketing; and Akira Sakai, Deputy Director from the Tokyo headquarters of Japanese Advertising and Public Relations powerhouse Dentsu Inc. Together, they agreed to build a ‘Future of Asia Global Lab’, which will help to develop cutting edge concepts and practice in the field of marketing and communications.

Masaaki Ishibashi, Secretary General of Asia Marketing Federation, Executive Director of Japan Marketing Association, and former Deputy Director of Dentsu Inc., where he worked for over 30 years, gave a fascinating talk on innovation. Ishibashi san started with a historical overview of Denstu, which I was surprised to hear was founded in 1901. Denstu he said could be translated from the Japanese characters as meaning ‘New Age Communications’. He also cited that the Japanese first defined the term innovation as ‘technological innovation’. This was something that he thought perhaps was the cause of a more recent phenomenon, where the Japanese have since described their shortfalls in the smartphone market by the term ‘Galápagos products’ – the continuous development of products with no relevance to the environment.

The headline event was the annual MarkPlus Conference, held in the Ritz Carlton Ballroom – with 5000 delegates, 500 companies and 50 speakers. This year the title of the event was, ’2014 Market-ing in the New Indonesia’. A key theme in all of these events was the argument that with the ‘-ing’ being tagged onto the end of market, which now has created a well-established and expanding discipline: marketing in companies and classrooms needs to fit with the market and to stay fit – because in many situations, markets are moving faster than the theory and practice of marketing. 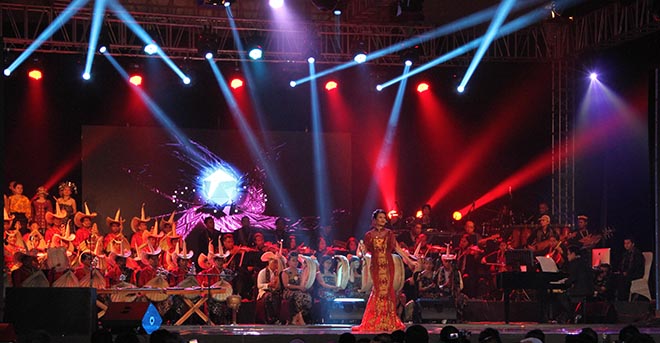 In the evening, as a grand finale to all of the debates, discussions and marketing awards, I was wowed by ‘The Real WOW’ (Wonders of the World) Night, which was organised in conjunction with Indonesia’s Ministry of Tourism. This was a breath taking three-hour concert, with performers using traditional and modern musical instruments.

So, it will be of no surprise for all you to read that Jakarta’s back in my diary for December next year. If you need further evidence of economic development, growth potential and appetite: an Organisation for Economic Co-Operation and Development (OECD) study predicts that by 2020 Indonesia will move from 6th to 5th place in terms of number of university graduates; with the U.S. slipping from 2nd to 3rd place. And so, I would encourage you to cast an eye east to Indonesia, as she appears to be gearing up to wake and shake the rest of the world with rich experiences and traditions.

Jonathan A.J. Wilson is an Academic at the University of Greenwich, and Editor-in-chief of the Journal of Islamic Marketing