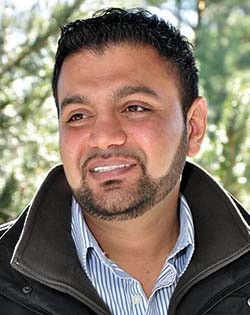 Tahir Sial will open a halal meat store in Halfmoon, NY. Sial plans to open Nov. 25. Besides halal meat, the store will sell spices, rice, vegetables and other products. The store signals the ongoing shift in demographics in the region. Siai sees an opportunity to serve the growing number of Muslims who are moving into the region.

A halal meat store expects to open soon in Halfmoon, NY, believed to be the first of its kind in southern Saratoga County – another sign of how the demographics of the Capital Region are changing.

There are a handful of similar stores in the Albany and Latham area, but the Halal Meat Market in a small strip mall on Route 9, near Clifton Park, would service the growing number of Muslims living in Saratoga County.

They include Indians, Pakistanis, people of Middle Eastern descent and other nationalities.

Halal meat is prepared according to Islamic standards, which stress humane and sanitary conditions when animals are slaughtered. The meat comes primarily from suppliers in New York City and New Jersey.

Tahir Sial was given approval by Halfmoon town officials to open a 2,500-square-foot store at St. John Plaza. He started installing equipment, and is waiting for final sign-off from the building department to open.

If all goes according to plan, Sial said he will open Nov. 25.

Besides halal meat, the store will sell spices, rice, vegetables and other products.

Sial, 32, opened a halal meat store on Central Avenue in Albany nine years ago. At the time, he said there was only one other. Today, there are several in the area, but not in Saratoga County, he said.

He considered opening a store in Latham, but settled on Halfmoon instead because many of his potential customers live in Saratoga County. He said that includes people who recently moved to the area to work at the GlobalFoundries computer chip manufacturing plant in Malta.

Sial, who is Pakistani, also owns Shalimar, a restaurant at the Peter Harris Plaza in Latham. He took over the business seven months ago.