The wholesale food store was trashed on 2 November. 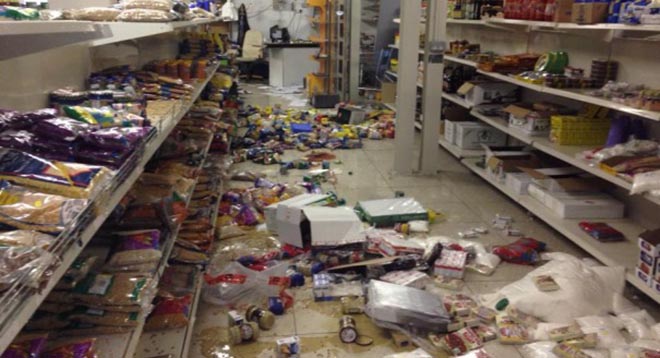 GARDAÍ IN DUBLIN are investigating a robbery at a Halal food store in the Cookstown Industrial Estate earlier this month.

According to investigators, intruders made their way into the Tallaght property between closing time on 2 November and opening on 3 November. An unknown quantity of items were taken, the place was ransacked and property damaged, a garda spokesperson told TheJournal.ie.

No arrests have been made but the investigation is ongoing.

Director of the Al-Minnah Foods outlet, Mohammed Djellal, says food, fridges and fittings were all destroyed in the incident.

Speaking to Niall Boylan on Classic Hits 4FM last night, the young man who is originally from Algeria described the robbery as a “disaster”.

“Everything was everywhere. I just can’t understand it. They destroyed everything. Food, fridges and fittings. They also stole the hard drive to the CCTV system.”

He said that he dealt with racial abuse being shouted at him previously but never to the level of the words scrawled on the walls of the establishment which he runs with his uncle Abu Abdallah.

Images posted on Facebook and shared via Reddit and Imgur over the past two days show graffiti, including the words “Pakis Out” and “Niggrs Out”, on a number of white walls in the store.

According to Djellal, the cleanup is far from over.

“I still have about a week to go to clean everything up. They even poured petrol all over the store room,” he added.

Previous: Saudi Arabia: Industry Leaders To Converge At Foodex For The Saudi Food Forum
Next: Opinion: Brunei’s next opportunity: The pharma industry