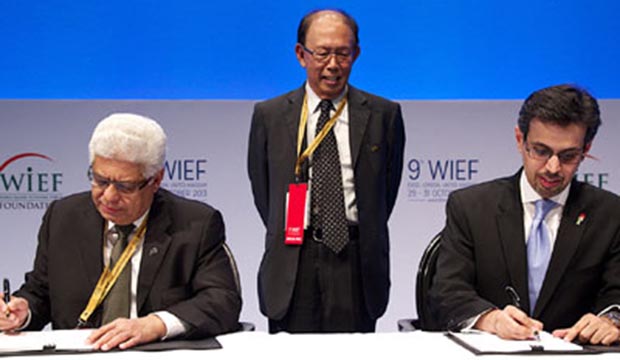 Dubai Chamber to organise WIEF in 2014.

Dubai Chamber of Commerce and Industry started preparations for the 10th World Islamic Economic Forum 2014 (WIFE), which will be held in Dubai in November, by receiving a high-profile Malaysian delegation led by The Honourable Tun Musa Hitam, Chairman of the WIEF Foundation.

The Malaysian delegation travelled to Dubai to attend the First Coordinating Committee Meeting of the 10th World Islamic Economic Forum (10th WIEF), held at the Chamber head office, to discuss the upcoming tenth session of this important economic forum.

The WIEF, launched in 2005, is attended by over 2,500 delegates from across the world and helps businesses explore investment opportunities, as well as policy-makers and thinkers to discuss the ways to benefit from the growth of Islamic economy, and the subsequent demand for Islamic products.

The meeting laid the foundations of the organisation of the 10th World Islamic Economic Forum (10th WIEF) with discussion including the proposed framework, issues, topics, venue, logistics and complementary programmes. During their four-day visit, the WIEF delegates also had a tour of Dubai World Trade Centre, which will be the location of the upcoming Forum.

During the meeting, H.E. Hamad Buamim, President and CEO, Dubai Chamber, said that WIEF – as one of the world’s largest gatherings to share knowledge, experience and expertise in the Islamic economy – would help support Dubai’s vision to become the world capital of the Islamic economy.

In his opening remarks, The Hon. Tun Musa Hitam, Chairman of the WIEF Foundation thanked Dubai Chamber for hosting the first meeting of the Coordinating Committee and for its commitment to making the  10th World Islamic Economic Forum a success.

He said: “The WIEF is at its 10th year this year. We have slowly built up the WIEF, taking nine years before it had reached London and now in Dubai. Let’s work together now to reach a wider audience.”

Speaking about the partnership with Dubai Chamber, The Hon Tun Musa said: “We seem to be in sync in our thinking and experience and can make this Forum even more successful than London. We must go ahead with this objective in mind and make this event worthwhile for business people.”