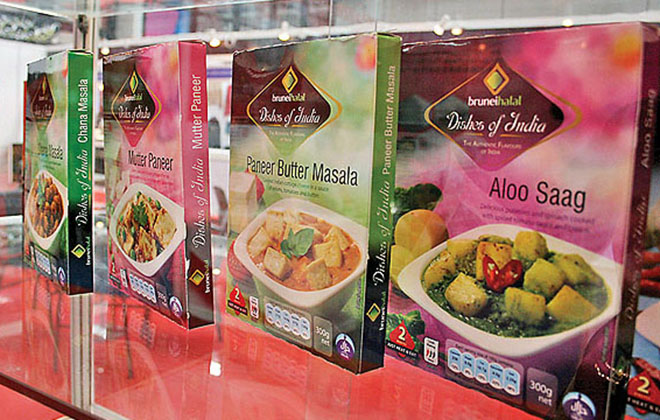 BRUNEI Halal is steadily gaining recognition in markets around the world. In 2013, delegations from both regional and European markets have expressed interest in cooperation across a number of sectors.

In January, a senior official from the Federal Agricultural Marketing Authority (FAMA), the marketing arm of Malaysia’s Ministry of Agriculture and Agro-Based Industry, said the agency was keen to market products manufactured by Malaysian small and medium enterprises (SMEs) under the Brunei Halal Brand.

“FAMA is definitely willing to do this. Brunei Halal can just name the products, we will look for the right SMEs who can meet their demand and then we can match them,” he said, indicating that there might be a number of young Malaysian SMEs who would not mind giving up their brand name abroad as part of a strategic marketing approach.

He said that such arrangement would benefit both Malaysia and Brunei.

“Of course, in business we have to have our own brand, at the same time, we have to supply to others to have a good marketing strategy,” he explained. “So we have to do that, it’s still a win-win situation. We have a lot of industries producing various kind of products. I think we can collaborate (with Brunei Halal) in that area.”

In April, the second deputy of Trade and investment Unit at the ASEAN-Korean Centre, Ki Bong Moon indicated that Korean promotion agencies were open to using Brunei’s halal certification system “as it will help increase awareness about halal in South Korea and allow the export of their food products to the Middle East”.

In May, the French Ambassador to Brunei, His Excellency Jean-Yves Berthault, spoke on possible cooperation with the halal food industy.

While there are no official figures about the number of Muslims living in France, Berthault said the figure could be north of six million, and estimated that there could probably be 10 million Muslims there. “We don’t know the exact number of Muslims in France, because we don’t compile statistics based on race and religion, but there is a very significant number of Muslims,” he said.

He added that there is a number of French Muslims who have set up companies in agriculture and farming with strict halal rules. The French ambassador said that this was what led him to think both countries could explore “cooperation projects” in this field.

In September, the chairman of the Taiwan Business Assocation (TBA) in Brunei, Lien Kon Sien, said that Taiwanese food companies are keen on producing halal products through partnership with Brunei that would allow them to penetrate the Muslim food market.

“They are here to learn more about Brunei’s halal brand and its benefits, and seek cooperation with the Brunei government and potential local partners to produce halal-based products from Taiwan,” Lien said.

In July, Dr Mohammad Nazir, CEO of Brunei Wafirah UK, a subsidiary of Brunei Wafirah Holdings, which owns the Brunei Halal brand, said that the subsidiary would be aiming to hit £200 ($381 million) in the “first two to three years” in the UK, adding that it will be expanding to the rest of Europe the following year.

In a report published July 14 in The Grocer, Dr Mohammad said that the product range, which comprises vegetarian ambient and frozen products including flatbreads, ready meals and soft drinks “had been redeveloped with a stronger focus on convenience and an on-the-go to appeal strongly to the younger part of Britain’s part of 2.7 million-strong Muslim community”.

On a recent post on its Facebook page, the brand noted that its UK exclusive Microwaveable Masala Potato Snacks are now available in over 130 Tesco stockists in the UK.

A collaboration agreement to research and develop the commercial cultivation of microalgae and the production of astaxanthin was signed between the ministry and Mitsubishi Corporation.

The minister said microalgae produce already has an established market across the globe, and added that marketing the product conventionally would still be highly viable.

“Even conventionally is enough, but since we have the Brunei Halal brand, this will be even better due to its potential development into niche halal products. It (the microalgae project) is enough to create a good business,” he said.

Mitsubishi Corporation has committed over US$2 million ($2.4 million) for the R&D stage of the microalgae cultivation project, which will require a further investment of US$15-US$20 million upon commercialisation.

With Brunei solidifying its status as an Islamic nation, the Brunei Halal brand will continue to gain weight in international Muslim markets. A recently signed cooperation between MIPR and the United States and Japan for scientific testing for halal certification has strengthened the legitimacy of the brand even further. There are high expectations for the brand in 2014, and its strength and weaknesses will play a key role in Brunei’s economic diversification.

Previous: Opinion: Moving on to the next level in the new year
Next: UK: Halal-elujah! Meat is safe for Muslims