What’s more important? Observing boycotts or trying to help as many Muslims eat Halal as possible? 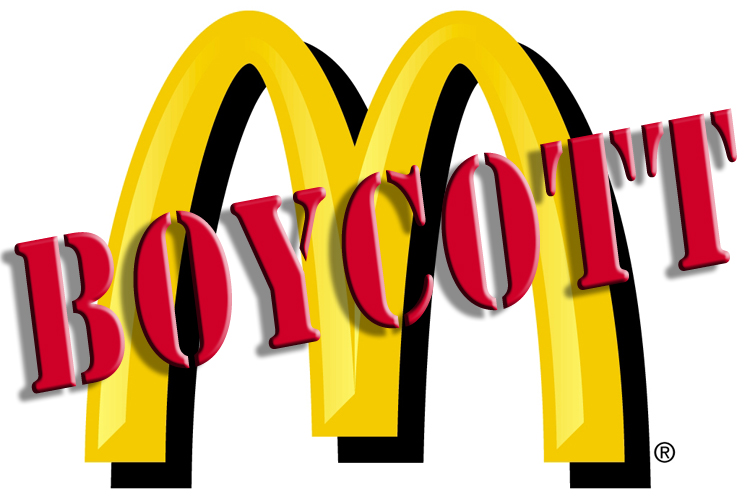 Every once in a while, a disapproving e-mail crash-lands into the eat-halal.com inbox. Here’s one that found it’s way through cyberspace and into our inbox a while ago:

I am shocked that you would buy from the likes of Burger King and McDonald’s etc. Not only is their so-called ‘food’ nothing short of junk i.e. not what we in the west would call healthy, but more importantly, both these institutions are profound backers of Israel and its racists, apartheid policies. As Muslims, we should be BOYCOTTING [them] rather than finding out if they are Halal or not!”

Welcome to the world of objective reporting.

From the very beginning, eat-halal.com’s mandate has been to “help Muslims eat Halal”. That often means reporting about companies against whom boycotts have been called for one reason or another, or reporting about food products that don’t have much nutritional value.

Boycotting a company and its products is an original grass-roots method of political and social activism. Over the years, various Muslim groups around the world have called for boycotts against a range of companies for varying reasons.

Many times, boycotts are needed and they can turn out to be fairly effective, as they tend to hit companies where it hurts most – the pocketbook.

Regardless of the reason(s) behind a boycott, the fact is that a) a boycott does not automatically render the products of a company Haram, and b) there is always a segment of the population that either doesn’t know about the boycott or just doesn’t care.

In addition, most of the time, the reason(s) behind a boycott are not sufficient to declare a company’s products to be Haram.

Sometimes, the policies of a company, the intended uses of a portion of its profits, or the nationality or religion of its proprietor(s) lead people to declare its products to be impermissible for consumption. Although it is good to be aware of who and what one is supporting with one’s hard-earned money, these factors do not make a product Haram.

The decision to respect a boycott is an individual one for each customer to make. Although it may be the right thing to do in many cases, a boycott simply cannot be imposed on everyone.

It is our responsibility to do objective reporting, and as such, we must report relevant information about companies, even if they are involved in questionable or undesirable practices.

If we were to black out information on products manufactured by companies under boycott, many Muslims would still go ahead and eat the products without knowing if they’re really Halal. Therefore, instead of withholding information, it is better to make public all relevant information. That way, at least more Muslims will hopefully end up eating Halal, Insha-Allah.

Nevertheless, reports on eat-halal.com about a certain company and its products by no means signify an endorsement.

Our duty is to promote Halal eating through objective reporting, and this means occasionally reporting about companies and products that are under boycott by one group or another. Advocating and promoting boycotts is not part of our mandate, and respecting those boycotts is up to the individual customer.