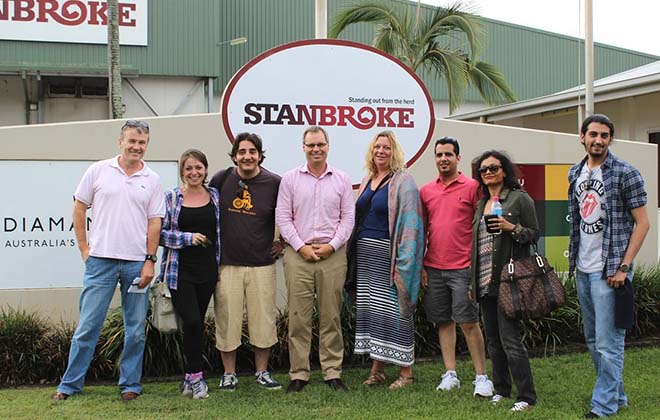 A group of food and lifestyle journalists from the Middle East region visited Australia late last year under an education program underwritten by Meat and Livestock Australia.

Their visit touched on all points of the supply chain, from cattle properties to feedlots and export processing facilities, as well as getting an impression of where beef and lamb sit within the Australian food service spectrum. The group was full of curiosity about the red meat industry when Beef Central had the chance to interact with them over dinner at Brisbane’s historic 800-seat Norman Hotel steakhouse, where a broad cross section of grass and grainfed product was sampled.

Published below is a perspective written by one of the tour participants, Mohammed Alshoaiby, who writes for the English-speaking  Saudi Gazette (saudigazette.com.sa)…

At Al-Fursan butcher shop on Riyadh’s busy Dhabbab Street, butcher Chris sliced luscious steaks off a fresh cut of Australian Angus sirloin, promising with sure confidence that what he was about to bag was “As halal as it gets.”

One week, and a 15 hour flight later, Lachie Hart, chief executive Kerwee Feedlot in Queensland, Australia, took a group of MENA-based journalists on a tour of his facility. There, the cattle are cared for in large pens, each tagged to read information on the cattle’s breed, diet, age, and so on.

The cattle are given ample amounts of shade via a system developed in Kerwee to work with the natural wind in the region, keeping the cattle relaxed. Their diets are separated according to their breed, from Angus cattle grainfed for shorter periods to longfed Wagyu.

The different grains that go into the feedlot are separated and stacked by type, each cereal and grain having a complex and healthy mix of vitamins and minerals. To the human palate, these grains range from a strong, salty, bitterness to a mild, cereal flavour.

Departing from Kerwee, the group set out for the Stanbroke abattoir, one of the region’s largest cattle processing plants.

Meat and Livestock Australia’s MENA market specialist Ben Larkin spoke a great deal about the integrity of the Halal process used across the Australian red meat industry, as demonstrated at Stanbroke. These claims were taken with a grain of salt, as everyone put on their protective helmets, boots, gloves, and coats, taking their first step into the cold boning section of the Stanbroke plant.

The visitors were guided through the process in reverse, from packing first, then to portioning, boning, gutting, skinning, and finally, slaughtering. It was at the last stage, the slaughter, where Chris’s and Ben Larkin’s words set in and rang true.

“B’ism Allah, Allah’u Akbar,” said Mohammed, a Moroccan Muslim and Australian national, who was too busy to talk as he slaughtered a few hundred cattle a day.

The process at Stanbroke was heavily inspired by Temple Grandin’s animal welfare work. She recommended that the cattle be lead into the abattoir in curved lines, to relieve stress before knife and neck meet.

The cattle are pillowed in a comfortable compartment, where they take a concussive blow to the head. The attendant inspects the cattle by touching its eye: if it blinks, it is still awake and needs to be struck another time, killing it and marking it ‘non-halal.’ If, however, the animal does not respond, it falls on its back at the slaughter table where Mohammed sacrifices it in the name of Allah.

Just to be sure, however, the carcase is later inspected by a Halal expert to ensure that the animal’s cause of death was, in fact, a slit throat and not a cracked skull.

Within seconds the carcases are hooked, hung and surged with electricity to drain them and improve tenderness. They are later skinned, gutted and sectioned.

Then, an inspector looks at the different cuts of meat inside the carcase to determine its marbling score (how much fat is in the meat), the colour of the meat (on a redness scale), and the colour of the fat (from yellow being worst to white being best). It is later tagged and sent to boning, later being portioned and packaged.

Cleanliness is taken into account every step of the way. Employees and visitors alike need to wear sanitized, protective gear, washing their hands and boots rigorously before stepping into a pool of sanitized water through the abattoir doors. Every employee wears a hair net, and a beard net for those with anything longer than a five o’clock shadow.

Stanbroke’s Glen Thompson mentions that an expert cleaning crew is about ready to take its shift, sanitizing the entire abattoir from even the most miniscule spot of blood until 11pm and having it ready, squeaky clean, for the next shift early in the morning.

“Nothing goes to waste,” Thompson said. The blood is sold to various pharmaceutical companies for research, the skin goes to buyers in the leather industry and the fat for manufacturing. The offal (tongue, brain, liver, eyes, kidney, etc) are also packaged and sold on the market.

Many of the packages of portioned beef cuts Stanbroke produces will find their way to the Middle East, seeing as red meat exports from Australia to the MENA region grew by 32 percent in 2013, at a total of approximately 161,000 tonnes.

“We take the Halal process very, very seriously,” Thompson said, and after a tour of the company’s facilities that statement was very difficult to argue against.

A few days later, a small Dash 8 aircraft flew the group of visiting journalists to the small town of Dubbo in New South Wales, where approximately 45,000 reside, many of which work at Fletcher International, one of the largest producers of lamb meat in the region and one of the largest exporters of lamb to the Middle East.

Graham Lyon, of Fletcher’s MENA Export Marketing department, took the group out on the pasture, where flocks of lambs live in comfortable conditions.

“We try our best to always make sure the stock are well cared for and comfortable,” Lyon said, “many of these innovations come from concepts developed by Temple Grandin (one of the leading names in animal comfort and animal health).”

Lyon draws attention to the saltbush that grows on Dubbo’s red soil. As its name would indicate, its leaves have a mild, salty flavour and a bitter aftertaste to the human palate, and are, according to Lyon full of minerals that are essential to the sheep’s health.

Later, the group arrives at Fletcher’s abattoir, where again, the hair nets, chin straps, coats, and boots come on. Fletcher’s cleanliness is on par with what the group saw at Stanbroke. Boots are hosed-down and hands are washed right before entering the cold boning room.

The entire process at Fletcher’s abattoir works on a long conveyor belt, where the sheep are prodded upon entering the abattoir with a light shock of electricity, knocking them out for approximately 38 seconds.

Before the 38 seconds are up, the Lebanese-Australian slaughterman says “B’ism Allah, Allah’u Akbar,” and slits the lamb’s throat.

Looking up at the abattoir, the word “Qibla” can be read with an arrow pointing towards Makkah Al-Mukarramah.

The lambs are hung and small bursts of electricity applied along the conveyor belt to tense-up the muscles to allow the sheep to bleed out entirely. The carcases are then skinned, beheaded and disemboweled, followed by a strict check up by a Muslim employee, whose task is to ensure that the meat is clean and that the animal had not died with any diseases.

After the admittedly difficult to watch process, the general consensus among the media delegation from the Middle East was that the integrity of the Halal process, as Larkin suggested, was impeccable.

“Every detail had been taken into consideration,” said Lyon about the Fletcher facility. “The abattoir was even built with the position of the Ka’aba in mind.”

The experience would have been more daunting had there not been such strong consideration for the health and well-being of the employees, the swiftness of the slaughter and the strict guidelines on cleanliness.

The Halal process is meant to be a quick and painless process for the animal, a testament to Allah’s mercy, and it is not here in the Kingdom where the standards of this process are set. It is, rather, 8000 kilometres away in the vast pastures of Queensland, Australia.

A 15 hour flight later back to Riyadh, butcher Chris was again chopping away at a beautiful red Angus rump, when the reporter described to him what he had seen in Australia.

It was, after all, as Chris described weeks earlier: as halal as it gets.